Home » News » NJ Startups Answer: Besides Securing Financing, What Was Your Biggest Hurdle in 2012? Part 1 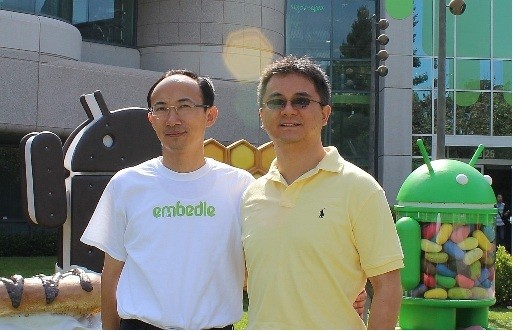 Embedle cofounders Fei Deng and Daoliang Yang have developed a “bookmarklet” that lets people have a Twitter conversation over a particular article or piece of content. | Embedle

NJTechWeekly.com talked to and interviewed dozens of N.J. startups in 2012. We understand that securing financing was the greatest challenge they faced during the year.

So we asked them to consider what else challenged their companies and to tell us how they solved the problem.

First to respond was Kirsten Bischoff, cofounder of Westfield-based Hatchedit.com, which offers a free shared online calendar for families and tools to support the family CEO. Bischoff and cofounder Megan Brown have produced this amusing video to describe the service. Hatchedit.com registered its first year of business in 2012.

Bischoff said the greatest challenge her startup faced was “the hurdle of changing people’s habits. We found that when we were out meeting with our users throughout the year — at conferences, at events we hosted to get feedback, etc. — people loved our site and our apps and how well they worked for their busy lives. We had enormous positive feedback.

“However, in these situations one has the opportunity to speak one-on-one with users, walk them through the site and show them how it integrates with their lives specific to whatever situation they are in — military family, divorced family, kids/no kids, single, etc. We don’t have that same opportunity when people are finding the site on their own.

“We are in the process of solving that problem now and will soon have a more user-friendly introduction as people sign up on the site. We had to develop a more focused way to walk them through the site when they first sign up.

“Changing people’s habits is very difficult and one of the biggest challenges I think tech startups face. Unless you can find a way to make them feel as though their lives will be better off and simpler from the very first moment they use your product, it’s very easy to lose their attention and enthusiasm.”

We reached out to Daoliang Yang and Fei Deng of Embedle (Somerset), who in September 2012 launched a Web “bookmarklet” that adds a Twitter feed to a Web page, letting users create a conversation around a story or product. Having recently learned about Embedle, we haven’t yet covered the company.

Said Yang, “The immediate challenge after we started Embedle was figuring out” what the tool should look like and perform like to be easily accessed and accepted by users.

“We started Embedle as a Twitter client application, the traditional wisdom at the time. We shared the prototype with our close friends. Everybody liked the idea, but very few installed it. When we asked for feedback, some said, very frankly, ‘I hesitate to install any new application on my computer. Why not give me something easier to try?’

“After rethinking and redesigning Embedle, we came up with an Embedle bookmarklet and shared it again with friends. Since most of them are familiar with the Pinterest bookmarklet, they immediately got it this time. The Embedle bookmarklet was formally released to the public in September 2012.”

Finding the right people to hire for a startup challenged at least one of the companies with whom we spoke. Clark Lagemann, vice president of Princeton eHealth startup HealthOptionsWorldwide.com, told us that a big 2012 hurdle was “finding key personnel that fit our core values. It’s very easy for an individual to shine during the interview process or on the job over the first couple of months, but startups are tough, and you need talent that has the competencies and dedication to push through the difficult times.

“What we found is that when you surround yourself with A-caliber individuals, you attract other As, but if your talent pool is filled with B-levels, you tend to find a large number of Cs nearby. The best way for your company to attract A-level individuals is to network, network, network!”

(In Part 2, we talk to more startups about their challenges in 2012 and how they overcame them.)