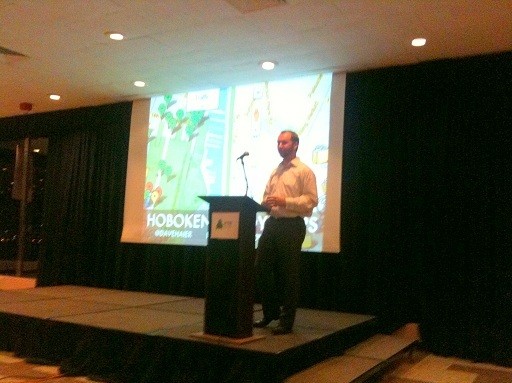 At the November NJ Tech Meetup in Hoboken, David Haier gave a presentation on HobokenSandyMaps, which were created using crowdsourced information during the crisis following superstorm Sandy. | Esther Surden

In the first weeks after Superstorm Sandy, NJTechWeekly.com followed the N.J. Tech community’s response to the unprecedented disaster that befell the Garden State. Our fledgling tech hub, Hoboken, was badly flooded; some companies located in Jersey Shore communities were affected, losing power and facilities; and many tech company employees felt the storm’s severe effects. The data center industry here came through with flying colors, but many centers ran on generators for weeks.

The telecom infrastructure in N.J. was threatened. In many locations, AT&T’s cellular and data network didn’t work for days or worked only sporadically. Verizon seemed to fare a bit better. Both companies opened their stores to those who needed to charge their phones. Cablevision and Comcast had their own troubles providing service during the weeks after the storm.

More important, though, the industry pulled together in amazing ways, organizing to raise money through HealHoboken.org (which is still raising funds) and Restoretheshore.cowerking.com (which has closed out its campaign after collecting more than $130,000), organizing employees to help clean up beaches and other affected areas and mounting food and clothing drives for victims. A N.J. startup, YouGiveGoods.com, ramped up to hold more than 175 virtual food drives, helping Sandy victims.

Many of our tech companies — both large and small — provided funds for relief efforts. Our coworking spaces, such as MissionFifty(Hoboken) and JuiceTank (Somerset), offered safe havens for workers displaced by the storm.

Almost four weeks after Sandy hit, we present some additional updates from the New Jersey Business Incubation Network (NJBIN) and HobokenSandyMaps. And there will be more stories to tell.

HobokenSandyMaps: At the most recent NJ Tech Meetup on November 12, 2012, NJTechWeekly.com learned about the efforts of healthcare executive and Hoboken resident David Haier, who, along with dedicated volunteers, created HobokenSandyMaps. The website crowdsourced information from Twitter, Facebook, Google and other sources about what was happening in Hoboken during the crisis.

Haier pointed out that not everyone had a stable Internet connection and could sit and wade through Twitter and Facebook reports. There was a need to aggregate the material, so he began doing it. “I started out by mapping shelters, charging stations, water tanks, anything I could find online. I used Twitter to spread the word to others to help collect the information.”

“Right away I ran into problems with Google Maps,” he said. He had opened it up for anyone to post to the maps, but right now Google Maps only allows one editor at a time. “If you don’t log out of the application you are basically locking everyone else out.” I had to change that pretty quickly. The other issue I ran in to was that there were only a certain number of map markers you could put on a page before it starts spilling over onto another page.”

“When we started getting reports of power coming back, we built another map, mapping street by street, marking entire blocks in green.”  After about a day of this, Haier realized he needed help so he reached out on Twitter and got six volunteers. “It was really the power of the crowd that gave me the idea to do this in the first place,” he said.

As one of the map’s users, Jeff Greenhouse, a digital innovator in his own right, said in his blog post, “The city of Hoboken (@CityOfHoboken) and PSE&G (@PSEGdelivers) did a decent job of communicating the big updates, but what we really needed were ground-level updates. We needed to know where the power was back on (block by block) and we needed to be able to see what kind of progress was being made. Fortunately, by taking advantage of Twitter and Google, we were able to get that information for ourselves.”

Haier “created the Sandy Recovery Map on November 1 using Google Maps. Initially, the map marked locations for supplies, food, water and other emergency resources. It also marked the few blocks in town that still had power. As additional community members reported in with updates, the map grew and ultimately spawned a second map: The Hoboken Power Map,” Greenhouse continued.

“As PSE&G began to bring small blocks and sections of town back online, residents tweeted the news that power was back on at Building X or Intersection Y. Dave and his fellow contributors would update the map with green lines where there was power, red where it had been up but gone back down, and yellow where they needed confirmation of rumors. Eventually shapes covering larger blocks of town replaced the individual street lines. Markers were added showing the town’s main substations,” Greenhouse said.

“I must have checked this map 30 times a day between Thursday and Saturday. Watching the progress as the map turned green bit by bit was incredibly comforting. It was also a beautiful example of a community using technology. Google Maps was the reporting [mechanism], Twitter was the network and we were the sensors spread out across the affected area,” Greenhouse said.

The maps had over 600,000 map views during the five critical days, Haier said. He added that he had a lot of help from the Google Crisis Team and CrisisCamp (supported by Crisis Commons), a group of hackers not in an affected area who help out by building tools during crisis.

Haier told NJTechWeekly.com that he expects to continue developing the idea behind the maps to help other communities that might face a disaster like that Hoboken faced. He’ll be posting more information about the project’s future on his blog along with information about upcoming volunteering opportunities.

New Jersey Business Incubation Network: For tech companies that lost office space due to Sandy, NJBIN issued a reminder that the network’s 14 incubators across New Jersey are available to businesses that have suffered a loss due to — or were displaced by — the storm. They provide low-cost, temporary office space and assistance. NJBIN incubators are fully equipped, state-of-the-art facilities with monthly rent starting at $225 for private cubicles. Office space is also available at a slightly higher cost (contact individual incubators for pricing). Monthly pricing varies per incubator; businesses should contact individual incubator directors for specific details.

In most cases, rent includes Internet, utilities and fax (printing and copying available for a small charge per page); unlimited use of conference facilities; individual business counseling and mentoring; access to essential services (attorneys, accountants, bankers, marketers, IT specialists, etc.); referrals to sources of capital; and access to university resources, such as student interns; educational workshops, networking opportunities, parking and security.

Previous: After the Accelerator: What’s Next for the First TechLaunch Class
Next: NJ Tech Community Responds to Sandy (Update 9)