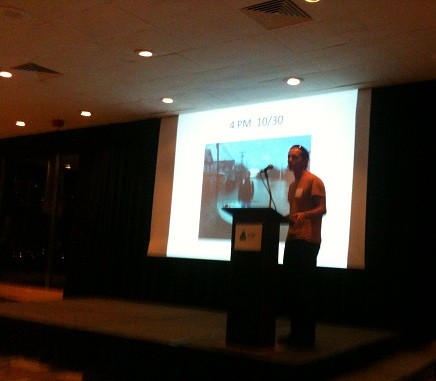 At the NJ Tech Meetup, Gil Olsen presented a short description of his website. Olsen hired a helicopter to create a map of the Jersey shore so homeowners could see and locate their damaged homes before they were allowed back on the barrier islands. | Esther Surden

NJTechWeekly.com continues to tell the tech stories that emerged in the aftermath of Superstorm Sandy. Yesterday we covered news about the New Jersey Business Incubation Network and the great work done by the developer of HobokenSandyMaps. Today we feature Jerseyshoresight.com and H&C Metals.

Jerseyshoresight.com: Telling his story at the NJ Tech Meetup on November 12, 2012, was group member Gil Olsen, who was born and raised in Point Pleasant. According to Olsen’s website, in the early morning hours after the storm, he and his friend Theresa Hazelton, a longtime Ortley Beach resident, were in contact to check in and try to access information about the fate of Theresa’s family home. Together they discussed options for obtaining information.

Olsen, who graduated from Rutgers University with a focus in physical geography and communication, surveyed the damage in Bay Head and quickly realized there would be no access to the barrier island for some time. He responded by hiring a helicopter and photographing every inch of the coastline from Sandy Hook to Island Beach State Park (Monmouth and northern Ocean Counties).

A day later, the aerial photos revealed that Theresa’s family home had been destroyed in the storm, Olsen said. He then recruited an impressive team of GIS experts and graphic artists from the Jersey Shore and across the country to help stitch the photographic images together into a website. It allows users to browse by street to learn what happened to their homes and neighborhoods.

“The motivation behind this was to be able to show everyone their houses, but now it has become a digital memorial, with before and after pictures. I, however, want to use this to help create a new future for the Jersey Shore,” Olsen said. Theresa “hopes these photos and this website will serve as an opportunity to raise awareness about climate change and reaffirm the cost of climate change inaction, so future generations can enjoy summers at the Jersey Shore,” he added.

In an email interview, NJTechWeekly.com asked Olsen how he was able to assemble a team on such short notice. He explained that he asked everyone he knew for advice on how to execute his plan. “From there, I learned that if you have a good idea, the proper people will be drawn to it,” to help out.

As for the future, said Olsen, “We are developing the site further, adding more of the Monmouth County data. … I would love to see the community come together and use the site as a way to chronicle the rebuilding process.”

For that to happen, however, the website will require funds. “We are looking for a sponsorship that will cover the cost of completing the visuals process. Mostly, though, what we really need is for everyone who reads this and cares about the shore and bay to become involved,” Olsen added.

H&C Metals: While it may seem unusual for NJTechWeekly.com to cover a scrap hauler, this company is attempting to ensure that Sandy-created e-waste is collected responsibly.

H&C was affected by Sandy in a multitude of ways, the company said via email: it was forced to close for a week, its customers have felt the storm’s effects and its staff was personally affected. In response, the owners have decided to increase cash payouts for scrap metal and e-scrap, provide free scrap pickup using their roll-off trucks and make a significant donation to the Hurricane Sandy New Jersey Relief Fund established by Gov. and Mrs. Christie.

H&C is particularly concerned with post-Sandy e-waste disposal. It has set up a Web page describing its response to the storm, which includes recycling hints and a section entitled Recycling Computers, Hard Drives, Electronics, & Microwaves Ruined by Hurricane Sandy.