At the end of each year, we publish a list of the 10 stories that most captured our readers’ interest over the course of that year. Our top story for 2020 referred to the themes of diversity and inclusion, which were so important to us all year long. Our second-most read story was about a way to seize the moment to make Central New Jersey a tech hub. Many of the other stories spoke about technological advances, interesting companies and the fact that business still kept going on while COVID-19 waged its war on us. Some startups were enthusiastically funded, right in the middle of the pandemic, and we published their stories too.

The 10 most read stories of 2020 are listed below, starting from the top, along with excerpts from each story:

It’s been a long journey, but the Black and Latino Angel Investment Fund of New Jersey is about to hear pitches from the first three entrepreneurs hoping for investment.

The fund, started by Lyneir Richardson, executive director of the  Center for Urban Entrepreneurship & Economic Development at Rutgers Business School in Newark, has 10 angel investors and has raised $500,000 so far. The angels want to invest at the pre-seed level in companies headed by black and Latino founders in the Newark area. The fund continues to look for new angel investors to join on this journey.

Last week, I attended Engage 2020, a conference aimed at highlighting Princeton Innovation initiatives, and listened to the vision of three Princeton faculty members and their take on how Princeton University could be to New Jersey what Stanford is to Silicon Valley.  It’s possible that their vision, along with support from the New Jersey state government, could be one way to accelerate the development of a startup hub in the Princeton area.

Verizon announced that its customers in Hoboken were able to access Verizon’s 5G Ultra Wideband network. This is the first city in New Jersey to get 5G Ultra Wideband mobility service, and the 21st city in the U.S. with a live 5G network from Verizon. With access to this new Verizon network, customers will have near real-time mobile experiences, with super-fast speeds, ultra-low latency and massive bandwidth, the company claimed.

Suppose you are developing an implant that involves both hardware and software, or an external device for diagnosing a disease or providing therapy. Or perhaps you are developing software that can be hosted on a variety of platforms. If the devices are used in or for humans, Sterling Medical Devices (Moonachie) can help you out.

WhizAI (Somerset) has an artificial intelligence (AI) technology for the business end of the pharmaceutical and life-science industries that some observers have described as “magical.” The company recently secured an additional $4 million in funding to further scale its software offering.

7. Walmart to Shutter Jet Brand, but Jobs to Stay in Hoboken, May 19, by Esther Surden

8. The Cybersecurity Dangers of Working From Home, December 3, by Mark McCreary

With over eight months of businesses and employees struggling with the challenges of working remotely, and us all coming to the reality that remote working is here to stay on some level, it is a good time to assess what we have learned. It is also important to have an understanding of the risks that we are facing in remote working environments.

Making the choice to become an entrepreneur can be one of the most exhilarating, yet paralyzing, decisions ever. The ebb and flow of entrepreneurship — the ups and downs, wins and losses — are enough to shake anyone’s confidence. Part of what keeps founders’ heads above water is our support system: cofounders, employees, advisers and others who share this intense experience.

10. Hoboken-Based Noteworth Closes a $5 Million Seed Round during the Pandemic, August 9, by Esther Surden

Hoboken-based Noteworth is a healthcare startup that is having a defining moment during the COVID-19 pandemic. The company, which has a platform that allows healthcare systems and large medical practices to engage in remote patient care, recently closed a $5 million seed round.

Previous: Predicting 2021—Udayan Bose on How Retail Marketers Can “Pivot” Toward Success in the New Year
Next: Opinion: New Jersey to Create Venture Capital Fund to Supercharge Investment into Early-Stage and Emerging Growth Companies in the State

27 More posts in cybersecurity category
Recommended for you 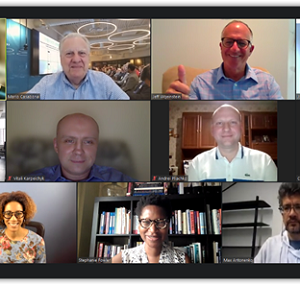 A Chicago startup captured top honors at TechLaunch Bullpen #24 on May 24 for its...