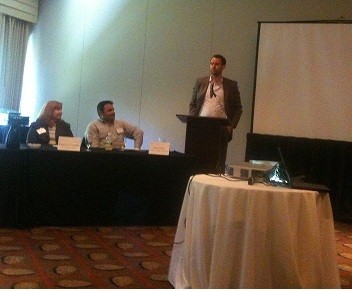 One of the alternative means N.J. tech companies can use to get funding when angels and VCs won’t write checks is creative bank financing, a specialty of Silicon Valley Bank.

Silicon Valley Bank is known as one of the few that works with small companies, supporting them in their earliest days. Operating from its Philadelphia and New York offices, it has had an active presence in N.J. for 15 years. For example, N.J. startup Snap MyLife (Princeton) recently secured a $3 million term loan for customer acquisition and growth initiatives from the bank.

NJEN organized the panel because the N.J. tech community found it very difficult to get commitments from VCs and angels in 2012, and NJEN wanted companies big and small to know about alternatives. Previous NJTechWeekly.com articles have focused on crowdfunding and options New Jersey offers to help companies.

White said the bank can assist in several ways. To companies venture-backed or not, the bank can provide a line of credit to help them “pull through capital swings.” Or, he explained, a firm might need term loan financing to build out equipment or lab space, or to make acquisitions.

“As a company you may have exhausted your angel source or equity source,” but you can still take a line of credit, White said. “As a lender, we are not taking equity positions in a business in the sense of diluting your company or making you sell stock.”

To decide whether to grant a loan or line of credit, the bank will look at your business history, investors and long-term prospects for the company.

“One thing to consider when taking a finance position is that the bank comes in as a senior lien position in the business. Often times the bank could take a first asset lien and in most cases will take a lien on intellectual property.”

Lenders will also ask you to prove out your business model, said White. If you are having issues along the way, the bank might “set some guideposts and have a conversation with you,” providing advice.

For the lender, venture lending is still considered an “art form,” White said. There are obviously risks to the lender when dealing with nascent tech and life sciences companies.

Silicon Valley Bank encourages young companies to think about using debt resources, since the debt markets are very cheap these days compared with four or five years ago, and companies are able to get lines of credit at competitive rates.

Added White, “I think it’s important that you take debt as part of your balance sheet, and this isn’t just because I’m a lender. It’s a better way to capitalize your business rather than going into the equity market and raising giant rounds of money.”

Ten years ago, he noted, you might need $5 million to $10 million in capital to build server rooms and acquire hard assets. With changes in technology, companies can start up with smaller amounts of capital. By incorporating state programs along the way, entrepreneurs can preserve their ownership positions. Finally, they should layer in the balance sheet commercial lending.

Also on the panel was Julia Park, an attorney at The Law Offices of Julia Park (New York and Englewood) who specializes in EB-5 visas for immigrant investors. Park discussed the EB-5 visa program, a vehicle for large companies needing a cash investment for very big projects — such as financing the construction of a hotel or an office building — or any large capital investment.

The program was established to help individuals and families who want to live in the U.S., Park said. They must commit to investing $1 million in a business. They live here for two years and get a green card if they have created 10 W-2, 35-hour-a-week, full-time worker jobs for each million dollars invested. Independent contractors don’t count.

If companies build in a Targeted Employment Area (TEA), which is defined by each state, they have to invest only half a million dollars, Park noted.

In a sagging economy, some companies in which immigrants had invested were having trouble creating the 10 jobs, so Congress created a pilot program that lets “indirect jobs” count as well. Indirect jobs take into account the economic impact a project might have on an area.

The pilot program has led to larger projects being funded by investors wanting green cards. A sample aggregate investment might be $90 million and include 180 investors. Some 90 percent of the investments are located in TEAs, because investors want more bang for their buck. One N.Y. tech project being backed this way is the New York Metropolitan Transit Authority (MTA) ticket system upgrade.

A regional center playing the role of financing intermediary is used to coordinate the funding,  Park noted. Right now most investors and potential immigrants are from China, she added. The reason: China has always had an infrastructure of migration brokers. It is easy for private brokers there to pull together the many immigrants who want to come here in return for an investment. Brokers in China get a commission for playing the middleman.

Previous: New TechLaunch Accelerator Class Launching in Montclair
Next: Whatever You Do, Make Your App Useful to Someone, Spira Says at NJConnect