Home » News » Whatever You Do, Make Your App Useful to Someone, Spira Says at NJConnect 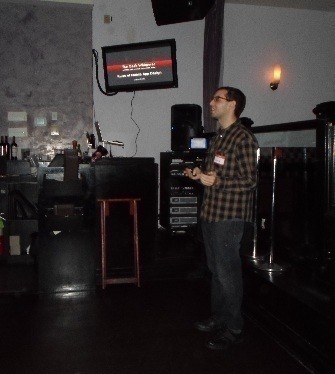 Mobile apps were on the agenda at the October 17, 2012, NJConnect Meetup in Red Bank, where David Spira, Geek Whisperer blogger and co-organizer of NJ Mobile Meetup, provided an overview of best practices in app development.

As Domenick Cilea, NJConnect Meetup co-organizer and president of Springboard Public Relations (Marlboro, N.J.), stated in his introduction, “We live in a three-screen world, with the cloud bringing it all together.” It’s important for companies to have a “mobile-first” mindset, because most people do access the Web on their mobile phones, he noted.

And in a world that requires a mobile-first strategy, app development has become a primary focus for businesses that want to deliver a seamless user experience across a number of devices and platforms, Cilea added.

Spira discussed some general principles of app development. Before you build an app, you want to figure out why you are doing it, Spira told the group. He said he had spent a lot of time planning and doing initial designs for apps that never got built.

Acceptable reasons for building an app might be to help people, to make something awesome, to have fun and because your users expect it. “Whatever you do, make your app useful to someone,” he said.

According to Spira, developers should strive for simplicity in app design. “When you look at the top apps downloaded from the app store, you’ll find that the majoritydo only one thing, and they do it better than anyone else on the app list.” Developers should figure out the core functionality of their apps and then cut out what they don’t need, he added.

Strive to put out a quality product, Spira advised. There are so many apps out there that developers can’t create a bad one and expect it to succeed, even if they are a major brand.

He provided the example of Androidify, an app that lets users make an Android version of themselves. Because it was released by Google, the app got a lot of publicity, and many users downloaded it. However, it was fun for “about five minutes,” Spira noted.

Getting users to download your app is only the first step. “If they don’t have an experience that is compelling enough for them to keep using it, you have an app that’s sitting on a phone waiting to be deleted.”

App security is often overlooked by developers, Spira said. Spending money on it isn’t fun, and no one gives the developer credit for building it in. However, consumers need to “get more from these devices than the devices take from them,” he noted.

So if you are asking consumers to disclose a lot of data about themselves, you have to protect them from transfer vulnerabilities and safeguard that information, he said. If you don’t, you are “breaking an unspoken promise” to the user.

Spira added that his rule is to take only as much information as the app needs to work, and no more. “For me, security is altruistic,” he said. However, there is a pragmatic component: “You don’t want to be the company that has 10 million users leaked.”

Once the app is out, some companies and developers forget about updates. But apps are not like the Web, where you don’t have to do a lot of work to ensure the website is working. They have to be revised based on operating system updates, device changes and screen size changes, to name a few situations, Spira said. And you are going to want to add new content. “Just stay focused on the core features,” he reiterated.

It isn’t a good idea to launch on all platforms at once. Pick one and make sure it works. Once it does, put the app on multiple platforms.

If you must launch on all platforms at the same time, a browser app or mobile website might be a better alternative. “You won’t get access to mobile phone sensors, but it will get you out there,” Spira noted. Another alternative is to use responsive design, allowing the website to detect the size of the screen on which it is being viewed and adjust the user’s experience based on that screen.