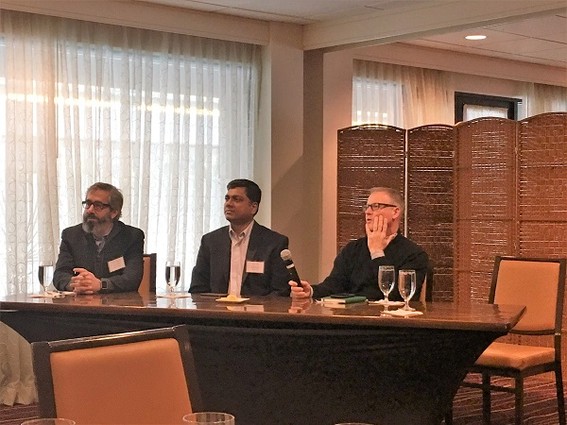 Early in a startup’s growth cycle, company founders usually look around for mentors to help them achieve their goals. One of the ways many young companies cope is to put together an advisory board that meets every so often.

Later in its development, after the startup has acquired funding, it will need a board of directors. That board often is made up of folks who have invested in the startup and others who can help it achieve its goals.

For startup founders, there are a host of questions regarding boards: What do they do? How should I use them? How can I find the right people? Will the board members take equity? So, last week the New Jersey Entrepreneurial Network put together a panel of experts to answer those questions.

The panelists were George Abraham, Raj E. Valli and Chris Sugden. Abraham founded Rhodium Strategies (Montclair), an independent consultancy firm for emerging growth companies, and has advised companies at various stages from start to exit; he has also sat on numerous boards. Valli, founder and CEO of Thinkster Math (Edison), an educational software firm that was recently rebranded from Tabtor Math, has developed boards for his company and sat on the boards of others. Sugden, the managing partner of Edison Partners (Princeton), currently sits on eight boards, and has been a member of 25 boards over the course of his career.

Here are some of the main points made by the speakers, in the order in which they spoke.