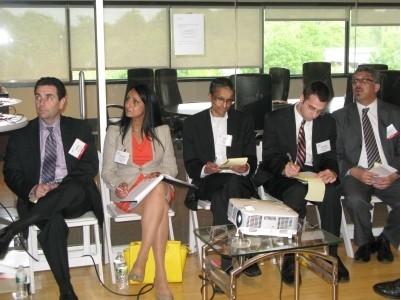 Thus far in 2013, the New Jersey Tech Council (NJTC) has held three Tech Idea and Demo Days in various parts of the state. The group wanted to create a forum through which new ideas and new companies could gain public exposure and receive a reality check from a panel of experts.

NJTechWeekly.com published an article on the first of these events here. As we noted, some companies presenting at the event had been discussed before on our pages. In this story we cover some companies new to us that presented on the Tech Idea and Demo Days taking place at Wells Fargo (Summit) on March 5, 2013, and at Marlabs (Piscataway) on May 9, 2013.

Rentricity, which won first place at the March event, uses the pressure differential between the large pipes that deliver water to a building and the smaller ones that companies use, to create clean energy. Presenting for the company, Frank Zammataro, president and cofounder, explained that users have to slow down the flow of water so the pressure doesn’t burst pipes. Rentricity takes advantage of inexpensive pumps as turbines that work in reverse, and it regulates the pressure and makes clean electricity.

“We install these in pipes as little as 4 inch[es] and as large as 36 inch[es], and we serve the water utility industry, the beverage industry, pharmaceuticals — any industry that is a big user of water. We take that power and either connect it to the grid or use it behind the meter behind the facility.” The company has some revenue and is seeking funding.

Alan Fuchs, CEO of TheEyePharmacy.com, calls his firm “WebMD on speed.” The company has developed an e-commerce website that covers everything and anything about eye health. TheEyePharmacy.com features proprietary content, some created by board-certified ophthalmologists. Users can visit the site to learn about eye conditions like cataracts and glaucoma or to research surgeries like LASIK. Fuchs noted that as the population ages, eye health is becoming increasingly important. TheEyePharmacy.com was founded in 2008, and by 2011 it was cash-positive, Fuchs said. The company wants to roll out four other medical verticals.

ElizaNor has developed a cancer tumor-targeting polymer nanoparticle. “We are very confident that we have a particle that will focus in on those cancer cells,” JohnHartman, president, said.

Genome Data Systems, the first-place winner at the May meeting, has developed a way to discern which patients with which cancers respond to which drugs. “Imagine you could figure out which drugs to use by taking a simple blood test,” RajanKumar, president and CEO, said. The company has begun to develop a cellular analysis instrument, called CytoSnap, that uses this technology to help scientists determine which abnormal cells respond to which medications.

In the digital realm, Rob Hughes, president of Staffquick, presented his company’s software as a service (SaaS) product, which prescreens individuals recruited for certain jobs to “eliminate off-target candidates during the initial prescreening process,” he said. Hughes added that the product uses custom-developed intelligence and analytics built into the proprietary software.

Public Service Solutions (PSS) discussed its direct-to-digital design IR detector for thermal imaging, calling it “industry disruptive.”  The design is said to outperform competitive products and cost 50 percent less. Another of the team’s products, ultra-wide-spectrum optics (trade name SMMiRo) technology is aimed at the thermal IR camera and lens market. Presenter Peter Kaufman told us the company is working closely with NJIT in the product’s development and doing its research with Dr. N.M. Ravindra, the Chair of the Physics and Materials Science Department.

NJTechWeekly.com was impressed with a presentation by second-place winner Andrew Hines, an inventor and the president of Starship Enterprises, several of whose products — although they do not use digital technology per se — improve the lives of the elderly and developmentally disabled. With the company’s product SitAssist, people who have fallen can find the device by crawling to it, and it then lifts them off the floor. It can also help get individuals from a sitting position to the floor, perhaps to do exercises. Similarly, Hines’s wheelchair invention can help transfer a person into and out of bed without the use of a separate mechanical lift.