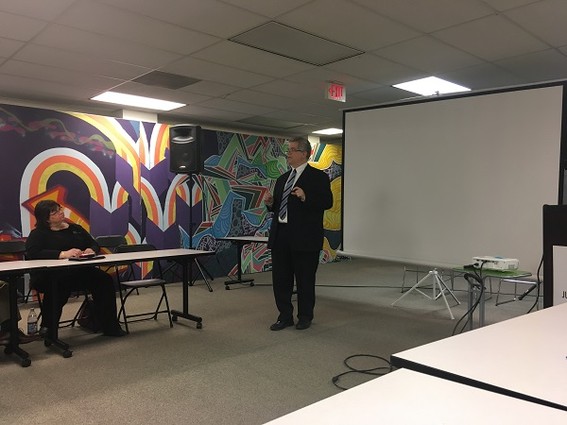 Stewart Levin talked at the All Thing Marketing meeting at JuiceTank in February. | Esther Surden

At the last All Things Marketing meeting, held in February at the now-closed JuiceTank Innovation Lab (Somerset), organizer Zion Kim assembled a group of folks, mostly from tech companies and startups, who wanted to learn something about “selling to the enterprise.”

The speaker was Stewart Levin, a client acquisition specialist.

Levin said he had made over 120,000 cold calls and sent 2 million to 3 million emails during the course of his career. He had opened up opportunities and made six- and seven-figure deals across multiple industries, with companies like Novartis, Microsoft, Nissan USA, and Epson.

“Cold calls, I love them. They are the best thing in the world. Everybody hates them, but do them right, and it’s one weapon in your quiver that you can successfully use.”

You have to have three or four ways of reaching enterprise clients, Levin said. You have to do an email push out every two weeks, you have to commit to making so many calls, and you can use social media like Twitter, but the most important thing is to understand the person you are trying to reach, he said.

Levin quoted Sir Martin Sorrell, founder and CEO of WPP (London, U.K.), who said that the average managerial life expectancy of a CEO in America is between six and seven years. This falls to two to three years for CIOs. Risk aversion rules in the boardrooms. This is entirely understandable, but entirely wrong, according to Levin. “This is the environment you are pitching into” when you pitch an enterprise, he said.

It takes finesse, a real thick skin, and many opportunities to fail

“You also can run into the old boyfriend or old girlfriend rule.” The person making the sale reminds them of the worst person they ever had in their lives. You avoid that by being professional, and by understanding what their problems are and how your solution can solve their problems. It takes finesse, a real thick skin, and many opportunities to fail, he said.

“What you need to start thinking about is that every touch you make to that individual becomes not just a reason to sell yourself and whatever you are doing, but to help them.” When your focus is on helping them, you usually need to pitch less. But you have to be able to move the needle for them, not just create an incremental improvement, he added.

The secret to getting an email address or a phone number for your target, perhaps a CIO, is to find an administrative secretary in the organization that can help you. For instance, when you reach the “admin,” tell him or her that you don’t want to bother the CIO, but you could use the name and number of the person who does the purchasing of XYZ. The admin will either hang up on you or will say something like, “Oh, that’s David.” Then you should say, “Can I call David and let him know we had a short conversation and that you thought he’d be the right one to talk to?” The admin will say yes 99 percent of the time, Levin noted.

Build a relationship with each contact attempt, he advised. “Before you call, find out what they are doing, what they are fired up about.” Make your contact be about something that they are interested in. The first contact might be nothing more than a LinkedIn follow. “You never pitch. It’s bad form, especially at the enterprise level.”

Levin told a story about reaching someone who wouldn’t talk to any sales people by asking him to guest post on a blog that reached 20,000 people. During the conversation, the target asked Levin what his company did. Levin responded, but refrained from asking for business at that point. It was just one step in building a relationship.

You can do similar things, he told the group. For example, if you notice that the person you want to reach is deeply involved in charitable organizations, you might be able to connect in that way, he said. “It’s more than just the standard thing you do on LinkedIn, where you figure out who else knows the target.”

They will remember the vendor who didn’t annoy them

Remember that customer relationship management software is your friend.  If you have been in business, you have gold in your database. You can follow your old customers when they leave. They will remember the vendor that didn’t annoy them.

Levin said that he chooses LinkedIn for automation because there are tools out there to help you start it. You can use a tool like Social Lead Machine (LinkedIn’s Autopilot has closed its doors), which costs $39/month. Sales people benefit from using a virtual private network with this tool, he said.

“Make sure your pitch is in your profile. Your profile is no longer a resume, it’s what you’ve done for people and how you’ve done it.” When people connect with you for the first time, don’t send a link. Just say, “Thanks for connecting with me. Most people do so because I do X. Is that your interest?”

Follow the people you want to sell to, see if they post something. If they do, comment on it. Any time you make a comment on something they do, they get a note in their email box. That prompts them to look at your profile. “That’s your best shot at getting them, because if you put your pitch in your LinkedIn and they need what you do, you will get a call.”