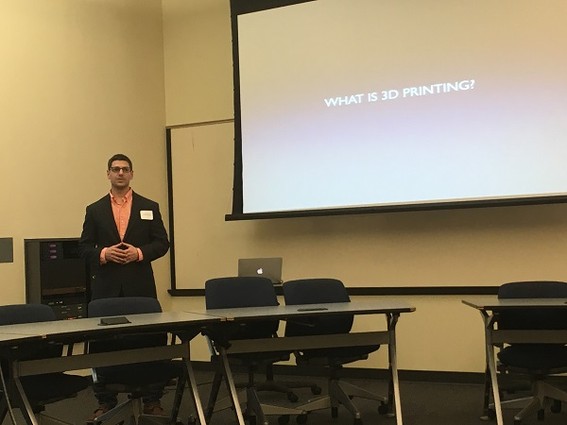 In April, Montclair State University held a 3D Printing Innovation Day aimed at showing teachers all the things they can do with 3D printing. Many of the educators who attended had just been provided with a 3D printer as a resource at their schools. The event was cosponsored by Montclair State’s ADP Center for Learning Technologies, in conjunction with the MIX Lab, a 3D-printing laboratory at the school’s Feliciano Center for Entrepreneurship.

NJTechWeekly.com attended the keynotes and one of the sessions. In the morning, representatives from Picatinny Arsenal (Dover) took the floor to discuss how 3D printing should be taught and to show some of the progress made in 3D printing around the world.

In the afternoon, Jason M. Frasca, entrepreneurship instructor at the Feliciano Center, gave a presentation on the future of 3D printing. Introducing the topic, he said that “3D printing right now is kind of like 1982 was for computer labs at universities.”

A lot of universities are just now figuring out that it is a good idea to set up 3D printing labs, he said, but in four or five years “every building on campus will have their own lab.” The universities will have discovered that if they arm students with this kind of technology, good things will happen, he said.

Frasca told the group that you can make almost anything with 3D printing technology. It only depends on what “you have access to.” The university has MakerBot 3D printers at its MIX Lab that use liquid plastic to create finished products.

“We will have a broader array of 3D printers in the not too distant future,” he added. As students can access different printers that can use different materials, “you are only restricted by your imagination.” Turning to some of the more futuristic uses of 3D printing, he mentioned that Tulane University is focusing on the use of 3D printers to replicate human organs and skin. Rutgers also has a number of patents in this area, he noted.

“It’s really fascinating. You print out blood cells, and there is an interesting structure —scaffolding — that folds up the cells so they can meet and join up” with other cells and the DNA. They grow over the course of two weeks into organs and skin, he said. The ability to grow skin is important for skin grafts.

Frasca said that 3D printers can be used to create substitutes for bone, and he showed how custom titanium hips can be made through this method. The difference between the 3D hips and replacement hips today is that the 3D-printed hips match the physical attributes of the patient.

Similarly, 3D printers are already creating prosthetics. “I think this is one of the most popular images we see,” said Frasca. He noted that this is important because children grow at a rapid pace, and they need to change their prosthetics often. “What we used to see as a prosthetic is a heavy, large piece of plastic,” but 3D-printed prosthetics can be made in ways that reduce their weight.

You can also 3D-print food, typically candy and chocolate, Frasca noted. Anything that is liquid-based can be used. It goes through a tube and can be heated. “I believe there are three different consumer-based 3D printers on the market that print food.”

MIT recently achieved the elusive goal of creating 3D printing glass. It was very difficult to do this, he said. “You have to get to 1,100 degrees to liquefy it, and then you have to cool it quickly in a controlled environment” to maintain the structure of the glass, he said, and also to have it be somewhat transparent. The glass structures that can be 3D-printed today are made layer by layer, he added. “Typically, you think of glass as a transparent sheet. We are not yet there with 3D printing.” There are a number of companies working on this problem, he noted.

Construction outfits can now 3D-print the outsides of very large structures such as buildings, said Frasca. This works by using the layer-by-layer method, but without a housing. The printer sits “on a track, kind of like a tank,” and the extruder moves around to layer the cement. Frasca showed a photo of a building in China that had been 3D-printed.

The absolute future, Frasca said, is represented by an accomplishment of GE, which recently made a gas valve for an airplane engine using 3D printing techniques. A couple of years ago, GE acquired two 3D-printing companies. It wanted to increase the size of the inventory it had on hand for engine parts, while making airplanes more fuel-efficient.

“This particular gas valve, when manufactured from metal, had 20 welds. When it is 3D-printed, it is one singular part.” It costs less, can be made faster, and is significantly lighter, which makes the airplane more fuel-efficient, Frasca explained. “Their goal, by next year, is to be able to 3D print 25,000 of them per year.”

Earlier in the day, Shahram Dabiri, Picatinny Arsenal’s STEM technology manager, talked about what 3D printing can do in a classroom, noting that “3D printing allows industrial design to come into a classroom every day.” He mentioned Autodesk 123D, a program that cost $60,000 several years ago and is now free. “It can be run on any computer by any student.” He recommended that teachers go to YouTube to find videos on how to use it.

Industrial design, he said, helps people create things that make tasks easier to perform. “It’s ridiculously important. It’s where art, engineering and the sciences come together.” He told the teachers to be on the lookout for students who show talent in art, engineering and science, and to try to steer them into this profession.

Dabiri also pointed the group to a website called “Thingiverse,” where students and teachers can get 3D patterns for interesting things. For example, if they want to show pupils what flint tools looked like, they can make plastic replicas of them using 3D printing.

He advised teachers to make 3D printing interesting for their students by using an industrial design approach. They should find a tangible problem that is solvable with what they have in their classrooms.

Teachers should limit the resources they allow students to use, he suggested. This includes everything from the number of grams of materials they receive to the space on your desk they’re allowed to access. The kids love this, he said, and they become very creative.

He advised the teachers not to show examples of potential solutions, as this will cause students to copy, instead of invent. Teachers have to know the limitations of their printers, however, so as to avoid frustrating the students.

“When your students design something, every step of the way, have them come before their peers and present their ideas,” he suggested. Presentation skills and the ability to take some criticism are important skills for students to learn, he said.