Home » Opinion » Opinion: Propeller Shows Startup Momentum is Building on This Side of the Hudson 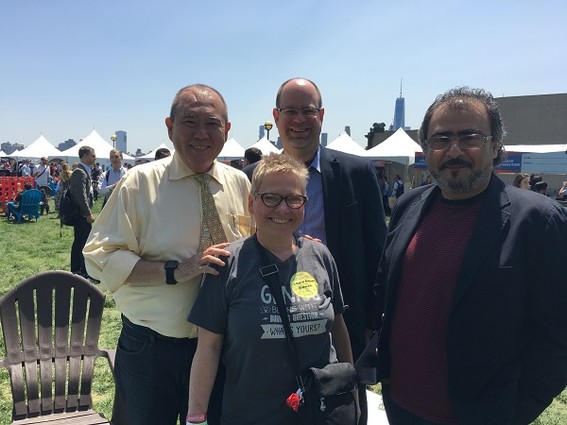 It’s been six years since Aaron Price founded the NJ Tech Meetup at a bar in Hoboken, and the good will and relationships he’s built up since then are what took things to the next level on Friday.

Price showed me the prototype for Propeller last fall at the Mission 50 coworking space.

While falling short of some of the most audacious revenue and attendance goals, making the whole thing happen in such a short time is a testament to his masterful promotion skills and entrepreneurial guts. Price knows how to get people to be his evangelists.

Friday was a start and Propeller’s a great name.

Partnering with an experienced large event producer and then galvanizing a team of unpaid volunteers,  Price saw the whole thing came together in one big agile sprint orchestrated through Slack. When enough of a revenue commitment came through, that tipped the scales for the City of Hoboken to commit.

Yes, there were plenty of operational glitches and a lack of reliable Wi-Fi on May 20, but grown men and women lined up before 9 a.m. and waited for up to an hour (sometimes even longer) to get through the registration process.

It says something about the momentum building on this side of the Hudson.

You couldn’t stand on any line without overhearing conversations about the red hot developer job market on this side of the river, and about how salaries are beginning to rival those in New York City.

One of the promises of Propeller was inspiration, and I found that in a pair of afternoon presentations on the Stage of Inspiration.

Francis Shanahan,  vice president of technology for Audible in Newark, took us through the remarkable 20-year history of the audio book company.

It’s been awhile since I’ve visited Audible’s products, but I was prompted to do so by Shanahan’s description of features I didn’t know had been introduced — the ability to pick up where you left off listening on any device and the ability to turn any Kindle title into an audio book.

But it was Gerard Adams, cofounder of Elite Daily, who really made my day. Unlike Gary Vaynerchuk, Adams managed to tell his story without dropping one F-Bomb from the stage, from which the volume propelled well beyond the confines of Hoboken’s Pier A park.

Adams has already experienced a life-changing deal with a $50 million sale of the millennial media company to the Daily Mail.

Adams talked about growing up in Belleville with a dad who left notes all around the house with inspirational quotes from famous leaders in history.

He dropped out of Caldwell College after one semester and just wanted to learn how to be a businessman.

“I knew I was in control of my own destiny and it was up to me to be a leader.”

Adams found a mentor who was impressed with his promotional skills, and this led to his first big failure. The company he joined was producing a nano-battery with infinite shelf life. Adams succeeded in filling a room with investors and media.

When the switch was flicked, nothing happened. The battery didn’t work. That was the end of the nano-battery, but one guy approached Adams and said, “Hey kid, here’s my card. I’m surprised you got me in the room.”

So Adams then started an agency to help market small companies, and took it to $10 billion in revenues by the age of 24. Then came the crash of 2008, and his father was laid off.

Adams pivoted and started looking at millennial media, with a view to developing a one-stop Huffington Post for Gen Y. He and two interns took action and began figuring out how to get the audience to engage and share. The answer was authentic and raw material, and a lot of hustle.

“We had to have people believe in what we stand for. That’s how we built it. I owe it all to the team. We had to fight.”

The sale to Daily Mail is the deal that changed his life, allowed him to help his family. He asked, “Why did God give me this opportunity?”

It was at a Tony Robbins event that he heard, “Success without fulfillment is the ultimate failure.”

This impelled him to connect with a childhood friend who owned a plot of land in Newark and said that they should build something. Hence, the genesis of Fownders.com and a nonprofit incubator to teach the entrepreneur mindset to the youth of Newark.

Five startups will get to use the space for free. The pitch at the incubator is on July 7.

One of the oddest exhibitors I stumbled upon was promoting a meditation conference and concert set for June 25 at the New Jersey Performing Arts Center (NJPAC).

Serendipitously, the concert features Honor Finnegan, a singer/songwriter who had headlined a concert at an intimate retreat I had organized the weekend before Propeller.

It seems that techies need meditation more than anyone.