Home » Opinion » Opinion: The “Price” is Right for the NJ Tech Scene. Or Is It the Other Way Around? 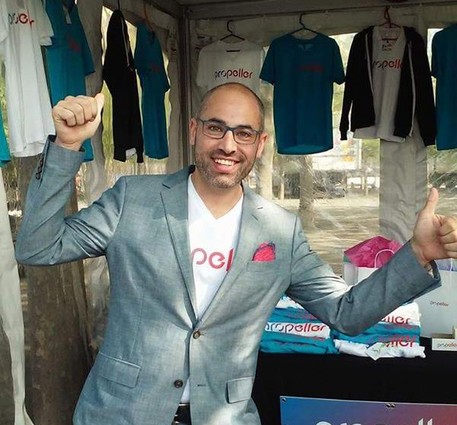 It was a nice sunny morning on May 20, 2016, when a twenty-something woman from Brooklyn asked a question. She wanted to know how she could protect her designs — 3D-printed headpieces similar to the Statue of Liberty that are able to fold so that they can be carried onto a plane. They were for the Burning Man Festival, in the Nevada desert, where people would wear them in various stages of undress and intoxication.

This question was asked of Elizabeth Gearhart, of Gearhart Law, a patent law firm in Summit. Elizabeth had a booth at one of the most unique technology gatherings I have ever been to, the Propeller festival.

Such interesting and unique encounters happened throughout the day at Propeller, so I wanted to know how it happened. I wanted to know about the person behind the scenes who could come up with the crazy and gutsy idea of bringing together technology, music, food, drink and over 8,000 people from the New York metro area and other parts of the world.

The driving force behind the event is an unassuming man in his late thirties by the name of Aaron Price. Frankly, his story is not much different from yours and mine. Well, maybe a little. Would you have the guts to put everything on the line, never having done anything like this before? Would you have the guts to risk being a laughing stock in the New Jersey tech community if it failed?

The reason I called him unassuming is that he comes across as very easygoing, with a great smile and keen intellect. More important, he’s never full of himself. Our conversation started not because of the festival, but because of a passion, his passion. More on that a bit later.

So, about six years ago, he started the NJ Tech Meetup with about 20 members. Now the meetup has over 5,700 members and is still growing. They even have a wait list, and if you don’t show up, you get put on the no-show list of shame! He quietly built a culture of respect, while at the same time supporting the technology spirit of New Jersey.

Furthermore, Aaron was able to invite a great variety of speakers, many of whom represented the “technilligencia” of New Jersey. One of these speakers was Gary Vaynerchuk. Aaron has known Gary for over three years, and had him speak at his meetup about a year ago. Gary, whom I think of as the Rob Schneider’s “You Can Do It!” character in the movie “The Waterboy,” had a profound effect on Aaron that day. His positive, can-do message truly resonated. Aaron was disillusioned with his previous company, where he set up large corporate events for companies like Verizon. Nothing against Verizon here, it’s just that he felt disconnected from the people there. He felt empty. So, as Rob Schneider so eloquently put it, he decided to DO IT! and Propeller was born. The goal was simple: Inspire, Educate, and Have Fun!

The first thing he did was reach out to people to volunteer, and he was amazed at the response. This article may give the impression that Aaron did everything, but the first thing he told me was that he was very grateful to all of the volunteers, and could not have done it without them. He also reached out to Gary, who committed early to speak at the event. He was a huge draw. Aaron then reached out to every corporate sponsor he could find and pulled in every favor. He even sacrificed a small goat to make sure the weather would be perfect, and it was! (Of course, he never killed a goat, I just put that in to emphasize the Herculean effort need to get this off the ground.)

One month before the event, with everything booked and his own money pledged to fund the event, Aaron was staring at only 800 registrations. At the same time, I attended the Morris Tech Meetup, and somebody asked me if I was going to Propeller? I pretended that I knew what they were talking about said, “Of course!” Then I was asked again and again. It just went viral, and a week later everybody was talking about it. What? Do you mean they’ll have music and drinks and multiple stages? And it’s all day? And it’s in the open? And it’s in Hoboken? Well, you get the picture. Propeller had over 8,000 registered attendees, with the average age of 33, of which 55 percent were from New Jersey, 40 percent from New York, and the rest from all over the world. I think this video by Christopher Hall says it all. Please watch the last minute of the video to understand the impact and the passion.

Now, let’s get back to Aaron’s passion. The Urban Dictionary defines passion as “when you put more energy into something than is required to do it. It is more than just enthusiasm or excitement, passion is ambition that is materialized into action to put as much heart, mind, body and soul into something as is possible.”

Ok, you may be thinking that I just created the best motivational poster ever, but in Aaron’s case, it is reality. It is a quest for self-affirmation filled with successes, failures, dead ends and close calls. The success of this event was truly one of the more emotional and passionate days of his life. It was a validation that he was right, that the pundits can go pound sand and that his vision can not only shape his life for the better, but also benefit many people around him, including the woman who had that simple question and decided to come all the way from Brooklyn to Hoboken to find the answer.

So back to my question: Is Aaron Price right for the New Jersey Tech Scene, or is it the other way around? You know the answer is yes to both, and this is only the beginning. One thing that’s clear is that Aaron is nowhere near done. He has meticulously documented what can be done better, and is very excited about the next one. This Propeller is going places, and I, for one, am an eager passenger. Thank you, Aaron! YOU HAVE DONE IT!