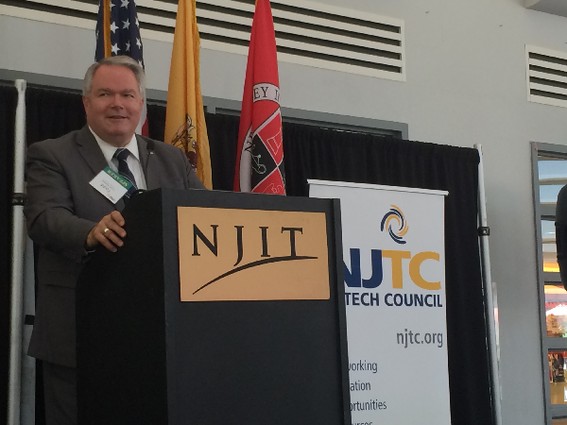 Todd Rytting, CTO of Panasonic, gave the audience at the New Jersey Tech Council Internet of Things Conference a surprising account of Panasonic’s vision for IoT. One hint: It doesn’t involve wearables.

To Panasonic, IoT involves factories, stadiums and 747s, as well as systems that communicate with each other and with control stations. Panasonic’s business in the U.S. is almost entirely B2B, and when it comes to IoT, the company creates high-end systems that deliver stadium entertainment and lighting, weather information from big airplanes, and more.

The NJTC Internet of Things Conference took place on May 7 at New Jersey Institute of Technology, in Newark. It included  speeches, presentations, discussions and a look at the financial ecosystem of IoT. Panasonic Corporation of North America is headquartered in Newark, and the company’s New Jersey connection made its participation in the conference of interest to many.

Rytting, who lives in Utah, urged the tech industry to continue to invest in IoT, to connect devices and to collect information. He did caution, however, that the industry must use the collected information appropriately, combine it with third-party data and present it in a way that provides value.

Panasonic wants to spur growth in IoT, Rytting said, and in March the company gave away some of its key patents to an open source consortium.  Rytting added that students are also making use of the patents, including some NJIT students who were presenting their Capstone projects the day he spoke.

Setting the stage for Panasonic’s view of innovation, Rytting gave the audience a brief look into the technological innovations that were at the heart of the company’s founding, including the company’s first product, which changed the light bulb socket into a receptacle. He took the audience through the company’s improvement on the bicycle light, and through its leadership in switching from electric-powered to battery-powered radios, something that was new to Japan at the time.

Rytting then skipped to the present, showing a film about the immersive digital signage and content at Lincoln Financial Field, in Philadelphia, where many high definition LED boards light up the stadium, and where fans can take selfies and (after they’ve been checked) see them up in giant lights. In this case, he said, the stadium is a thing, and the goal is to create connected experiences.

In Panasonic’s world, the Boeing 747 airplane is also a thing. Panasonic says that the company is a leader in in-flight entertainment, making the entire system—from connectors and cables to flight-qualified servers and the antennas that connect with the satellite. “We monitor at all times planes flying with our systems in the world, and that’s about 3,500 planes every day,” Rytting said. “We know if seat 34E is having a problem. And if a plane is landing at a major hub, we can usually have a part there to fix it.”

Panasonic recently purchased a company called AirDat, which has patented the TAMDAR (Tropospheric Airborne Meteorological Data Reporting) sensor, a device that is installed on planes. The sensor is good at measuring atmospheric conditions when the plane takes off and lands. “It turns out that we can greatly improve the prediction of weather, ” Rytting said.

The National Weather Service uses balloons twice a day to check atmospheric conditions, but there are errors associated with that method, he said.  With the Panasonic system, instead of having 70 soundings each day  we can monitor sensors on as many as 3,500 planes as they take off  and land, he said.

This aspect of IoT will help in emergency preparedness; it will also help farmers who rely on accurate weather reports. Rytting said that the Panasonic system had gotten it right this past January, when a storm of historic proportions was predicted to hit New York, but missed and went to Boston. “In the future, we may provide a weather app with more information,” he said.

Factories are also a thing in Panasonic’s IoT. The company produces software that provide factories with automated systems for minimizing waste and increasing efficiencies. In addition, the company has continued its traditional emphasis on batteries and is working with Tesla Motors to develop a lithium-ion-battery plant in Reno, which will employ thousands of workers.