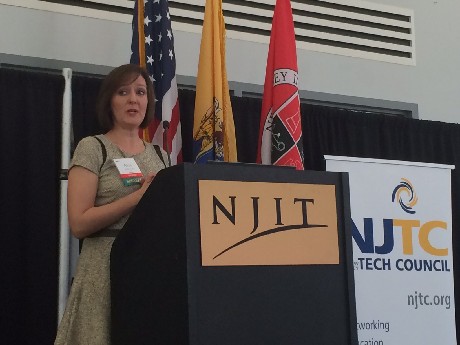 Alicia Abella of AT&T was the keynoter at the NJTC Internet of Things Conference. | Esther Surden

The event, which took place at New Jersey Institute of Technology, featured talks and demos that showcased technologies, insights and opportunities around the next frontier of information access. The audience included many engineers, designers, researchers, data scientists and entrepreneurs.

“We are delighted to talk about preparing for the Internet of Things and to share what’s next … so we can exploit the opportunities presented by what’s next,” said James Barrood, NJTC president and CEO.

She also spoke about her ideas of what will make IoT into a true revolution, comparable to the Internet revolution of recent years, which has made the Internet an indispensable part of people’s lives.

Abella’s group at AT&T had helped her come up with some of the most unusual sensors they could find to demonstrate her talk.

One sensor she spoke about helps employers figure out whether their employees are happy. Apparently, people’s happiness can be measured by how fast they walk, their heart rates, if they have a spring in their step, how much they fidget when they are sitting in their chairs and how much they talk, among a host of other behaviors. “This is one of those things that privacy becomes a bit of an issue. …We have to be mindful of privacy when it comes to IoT.”

Another detects wetness in baby diapers. “What’s interesting about this is not that a sensor is detecting wetness in a diaper,” Abella said, but that the sensor is being developed on a very flexible, low cost and disposable circuit board. She noted that this development will have implications for medical applications, as many medical sensors currently in use are uncomfortable for patients to wear. And you can imagine using it for many different applications.

“We have all these sensors out there, and they are all collecting interesting information. They are feeding it to us, streaming through the Internet, and we are collecting it and analyzing it. Sometimes we are taking action on it and transforming whole businesses around it. But it feels a bit disjointed,” she said. “There has to be something else out there that will help create this major revolution.”

Abella compared the IoT to the Internet revolution, which filled a void that people didn’t really know existed. “I feel that, with the Internet of Things, we are also poised to fill a void. If we can identify what that void is, we will know what that IoT revolution is going to look like.”

She compared the coming explosion of devices to the Cambrian Explosion, a period 530 to 520 million years ago when the earth saw the most diversification of animal phyla in our history.

It was a sense, a vision, that sparked the Internet revolution, said Abella. Suddenly, it created a different competitive landscape. Maybe the sensor that will launch the next revolution has yet to be invented. Maybe it will be a group of sensors.

Each step that researchers take along the way adds to the cumulative store of knowledge, and will help realize the true value of the Internet of Things, she said.