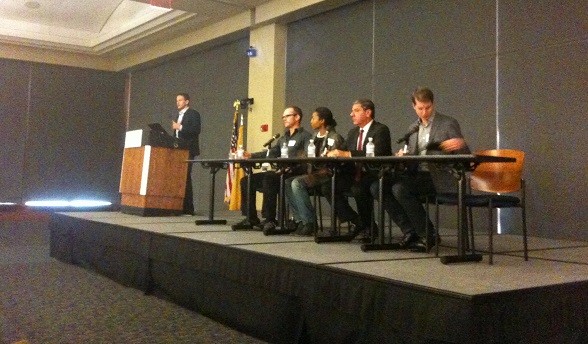 A panel of experts discussed crowdfunding at the Monclair State Entrepreneurship Meetup in September. | Esther Surden

Organized by the Feliciano Center for Entrepreneurship at Montclair State University, the meetup is dedicated to providing entrepreneurs an opportunity to learn, connect and collaborate, and it often features subjects of interest to tech startups and investors.

Crowdfunding under the Jumpstart Our Business Startups (JOBS) Act is one such subject, said Dennis Bone, the former Verizon CEO who heads the center.

[After this panel discussion took place, the SEC released proposed rules for Title III crowdfunding. Rules for Title II of the JOBS Act had just been approved and were scheduled to go into effect. That portion of the JOBS Act provided a way for startups to broadcast their offerings to everyone as long as the companies take money from accredited investors only, explained panelist Douglas Ellenoff of Ellenoff, Grossman & Schole, a Manhattan law firm.]

Zak Cassady-Dorion of Crowdfund Capital Advisors (New York), whose founders worked with Congress to frame the JOBS Act, was the keynote speaker on the panel and explained the origins of crowdfunding.

“Crowdfunding has been around for years,” he said. “In fact, the Statue of Liberty was [an early example of] crowdfunding.” In essence, it entails a large group of investors contributing a small amount of money to fund a project.

Online crowdfunding, a well-known example of which is Kickstarter, has been around for about 10 years. Cassady-Dorion said that at first he thought it was just a nice little idea. “But when I took a look, I saw that significant capital is flowing through these websites. By significant capital I mean millions of dollars a month. That is significant capital that people are essentially giving away,” he said, to make ideas they believe in come to fruition.

Cassady-Dorion noted that the idea for equity crowdfunding arose out of necessity. He and his partners — all successful serial entrepreneurs — had been trying to raise money in 2008 when capital dried up and entrepreneurs, even successful ones, could not find funds for projects.

Yet equity crowdfunding was illegal at the time. There was a cap on the amount of shareholders a company could have and a ban on general solicitation. Cassady-Dorion said he and his partners “sat down at …. the kitchen table and crafted the framework on how to legalize equity crowdfunding.” The partners then knocked on every congressperson’s door.

“We found that at a time when there were no jobs and capital was not flowing, if you come up with an actual solution, people will listen,” he said. The partners participated in congressional hearings, and after 400 days the framework, with modifications, was passed as law.

Cassady-Dorion believes the implementation of the JOBS Act will be a game changer for the American economy.

The panelists were quick to differentiate between Title II and Title III of the JOBS Act. Title III is what most startups have been waiting for. It will let them raise up to a million dollars from unaccredited investors, but only in an online environment — a portal or crowdfunding platform — regulated by the SEC. There will be caps on the amount individuals can invest.

As Douglas Ellenoff pointed out, the portal can market itself as a place where individuals can go to see interesting deal flow, but they may not market individual deals. That means only investors interested in seeking a specific deal will go to that funding platform. They will have to register and become educated, which he deemed an improvement to the process.

Ellenoff added that he is nervous about the implementation of crowdfunding: “Federal and state regulators are watching what will happen very carefully. What you think is a general solicitation may be still subject to antifraud laws. You may not hype your offering. Luckily, in the Twitter environment you are limited to the number of characters you can use. What you should probably do is direct people to a more involved offering.”

Some of the panelists pointed out that pitch competitions and similar activities could be considered general solicitation under some rules, and they advised startup CEOs to beware of such activities until better guidance is available.

Jonathan Sandlund, whose site the CrowdCafe follows the implementation of crowdfunding all over the world, noted that some companies are making deals today and accepting funds from accredited investors. CircleUp, FundersClub and AngelList are all online crowdfunding portals.

Ellenoff said the disclosures on crowdfunding platforms are often better than those people receive when they invest through normal private placements.

Kim Wales of Wales Capital (New York) said entrepreneurs must shine a light on their activities by posting to the Internet and providing the SEC business plans and other information aimed at shutting down fraud. For example, depending on how much money you are raising, the company’s CFO and CEO may have to certify the financial statements, she said.

Other panelists said everyone will be able to see the valuations, and people will be expected to challenge the business model in the open. They thought that would make investors better informed than they are today. Entrepreneurs will have to account for how they use the money raised, which may make pivoting more difficult, suggested one audience member.

A final piece of advice from the panel: entrepreneurs should ensure that trademarks and patents are registered before the company goes out to crowdfund, so the firm is protected before everything is made public on the portal.

Previous: Tech Events for Hackers and Entrepreneurs Highlight Busy November
Next: Panasonic To Lay Off 30 Employees as it Moves Away From Consumer Products