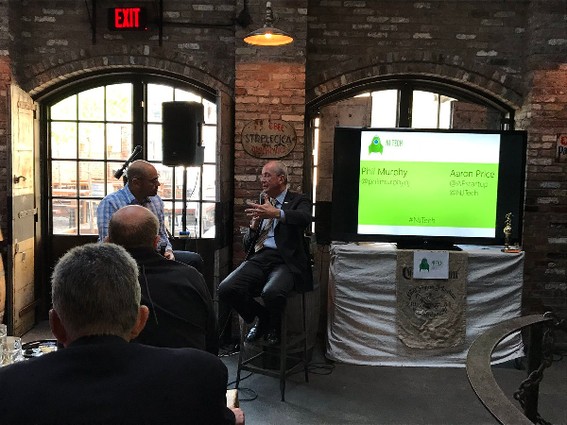 Meetup host/founder Aaron Price was very careful to point out during the meeting that this was neither a “political” event/rally on Murphy’s behalf, nor an explicit or implied endorsement for Murphy’s run for governor.

During his conversation with Price, Murphy stressed the need to rebuild the state’s infrastructure, while simultaneously reinvigorating the innovation economy.

Discussing the importance of education, Murphy noted that he wants to greatly expand the STEM (science, technology, engineering and mathematics) curriculum and proactively promote these subjects in public schools.

One alarming statistic he provided supported the claim that New Jersey is lagging significantly behind many other states in venture capital investments: While investments have doubled elsewhere across the U.S. during the past seven years, VC investment in the Garden State has dropped a whopping 40 percent.

Murphy was quick to acknowledge regional success stories in pockets around New Jersey — with Hudson County booming, life sciences doing well around the state and companies like Bell Labs remaining at the forefront of innovation. On the other hand, he noted that Atlantic County is suffering from the serious problems affecting Atlantic City.

There is plenty more to be accomplished, according to Murphy. A college education must become more affordable for students. He cited a derogatory ad for the University of Maine that he had recently spotted on a highway billboard, and that angered him and others he spoke with: The punchline was that Maine’s out-of-state tuition was in fact cheaper than New Jersey’s in-state tuition.

The New Jersey state primaries are slated for June 6, with the election taking place on Tuesday, November 7. Six candidates have officially declared their runs in the Republican primary, including the incumbent lieutenant governor, Kim Guadagno. Governor Chris Christie is ineligible for reelection due to term limits legislation.

Murphy is one of a half-dozen Democrats who have officially thrown their hats into the ring for their party’s endorsement and the right to be placed on the ballot in November.

Much of the fireside chat centered on the candidate’s contention that the current governor and his administration have been severely lacking in leadership. “The state of New Jersey is one of the singular most undermanaged things I’ve ever seen. It isn’t growing and it isn’t fair, said Murphy.”

In his view, the Christie administration has made very few attempts to fix the state’s inherent problems. This was clearly a failed opportunity, he said, but the next governor will have the opportunity to right many of the past wrongs.

“The next governor of this state must have a thick skin and have the requisite political capital in order to get elected and ultimately do a good job once in office,” he said.

Murphy has previously served as U.S. ambassador to Germany and was also a senior executive at the prestigious investment banking firm Goldman Sachs. He retired from there in 2003 as head of their investment management division.

Although he has yet to be elected into public office, Murphy has is no stranger to the helping others get elected. Between 2006 and 2009, he served as national finance chairman of the Democratic National Committee beside former Vermont Governor and DNC Chairman Howard Dean. During that time, Murphy raised a very respectable $300 million to help implement the “Fifty State Strategy” that won Congress for Democrats 2006.

Another point Murphy hammered home during the fireside chat was that the next governor must figure out ways to capitalize on New Jersey’s being perhaps the nation’s most diverse state, as well as the most densely populated.

If he’s elected, Murphy’s ultimate goal will be to stress that, although the cost of living in the state is never going to vie for the country’s lowest, New Jersey should still be promoted as a good bargain for residents. Along the way, he plans to expand job growth, with a view to generating more tax revenue and improving New Jersey’s fiscal standing.

During the event, Price spoke about the Propelify festival, which will be held on May 18 in Hoboken (rain date: May 19) along the waterfront on Frank Sinatra Drive. Attendees from across the Northeast and around the world will be there to promote innovation, education and fun.

Over 40 speakers will be on hand on two stages throughout the day. There will also be investor speed dating and numerous exhibitors with booths promoting their businesses. Last year’s inaugural edition was a huge success, attracting 8,000-plus attendees. Visit www.propelify.com for advance tickets and additional information on the full day’s festivities.  ——————————————————————————————–

Previous: NJ TECH CORNER: ADP
Next: Should We Regulate Big Data and The Internet of Things? Pederson Asks at NJ Big Data Symposium