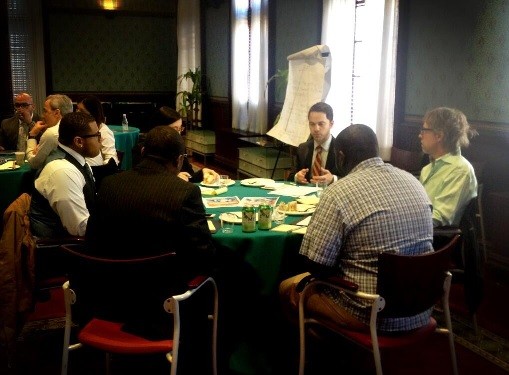 NJTechWeekly.com had the good fortune to attend a tech policy luncheon on April 5, 2013, sponsored by Washington, D.C.-based Blerdology and others during Newark Tech Week.

The stated goal of the event, which took place at NJIT,  was “to walk out with new ideas, partnerships and energy around continuing to make Newark one of the boldest and most innovative cities in the country,” said Kat Calvin, Blerdology founder, in an email to participants.

The policy lunch was held during a week of activity brought together under the Newark Tech Week umbrella by Blerdology. Events included an entrepreneurship discussion by Mike Michalowicz, the author of “The Pumpkin Plan” at Rutgers Business School (Newark); TEDxNJIT, an independently organized TEDx event; a Science, Technology, Engineering and Mathematics (STEM) education day at various Newark schools; a Newark tech happy hour to bring the community together; and #blackhack Newark, a charity event covered here.

Representatives of Newark’s existing tech industry — such as Audible CTO Guy Story; Lawrence Hibbert, CTO and founder of BCT Partners; and the mononymous Medina, who represents the intersection of tech and creative arts with his MEDINA = CITY design collective — participated, as did representatives from New Jersey Institute of Technology and Rutgers Business School.

The luncheon was facilitated by Kimberlee Williams of Femworks (Newark), a national communications agency, and Karen Brown Stovell, executive director of Newark-based Forward Ever Sustainable Business Alliance (FESBA). FESBA’s mission is to provide a support network for locally and independently owned businesses.

The energy level in the room was high as participants, working in small groups at round tables and fueled by a buffet lunch, considered the following questions put to them by the facilitators: What is Newark’s entry point into the tech world? Why is it important for Newark to be a tech capital? What are the stakes? How do we make it happen? And what leaders and others not at this meeting need to become part of the conversation to make it happen?

At one table the discussion focused on how the city should allocate scarce funds to help bring existing tech industry to Newark, while another concentrated on startups and how to attract them. After all the discussions had finished, the entire group reconvened to discuss its conclusions.

Newark possesses some but not enough pieces of the puzzle, the group concluded. Those who wanted to enhance the startup ecosystem said the city needs a coworking space and possibly a tech accelerator in addition to the NJIT Enterprise Development Center incubator that has been there for many years, and many thought public-private partnerships would work to stimulate that ecosystem. To attract startups, Newark needs to develop an environment that attracts what tech people like, some felt. The city should be welcoming to artists, professionals in the culinary arts and others who usually coexist with a tech community.

Much attention was paid to branding, with many at the event enthusiastic about Newark’s existing ecosystem but worried that others didn’t know about it. They suggested that Newark develop a Newark Tech brand; create a website called whynewark.com; celebrate and publicize the “small, amazing” things happening there; develop a welcome packet for tech companies considering the city; make people aware of the tremendous amount of intellectual property at its universities; and obtain celebrity endorsements.

Some attendees focused on outreach and ways to break down the silos that exist within the tech ecosystem, such as ensuring that facilities at higher-education institutions like Rutgers Business School and NJIT are available to Newark tech entrepreneurs and that they know how to access them.

Those thinking about how Newark should allocate its time, money and resources to creating a tech ecosystem concluded that more resources should be devoted to attracting midsize companies than to startups. The reason: midsize companies are thought to be more stable, can hire within the community and can leverage existing strengths and city resources such as warehouses, transportation and logistics. Some participants agreed that more attention should be paid to workforce development so tech companies could hire locally.

Newark has an existing core strength of industries that can attract tech innovation: education, food science, healthcare and transportation. Pulling in companies that offer tech to those industries should be a priority, some thought.

Regarding those not at the table who should have been, the group said that the state, represented by Lt. Gov. Kim Guadagno, has a stake in the conversation and can help push the agenda forward.