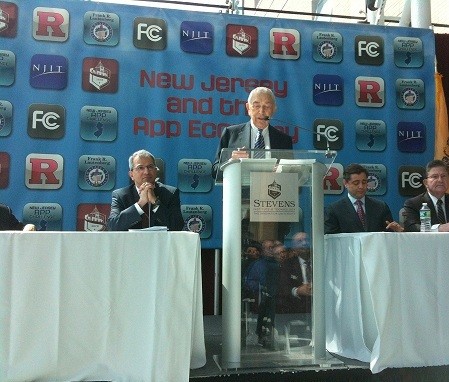 Frank Lautenberg was the senator behind the bill withholding federal highway funds from states that refused to raise the legal drinking age to 21 and the legislation to restrict smoking on airplanes.

He was the fighter behind the now-defunct commuter rail tunnel to N.Y. and the author of an amendment to a spending bill that prevented those convicted of domestic violence from buying or owning guns.

He fought for environmental causes.

However, for the N.J. technology industry he was the tech entrepreneur, the successful founder of Roseland-based Automatic Data Processing (ADP) who never forgot his entrepreneurial roots.

NJ Tech Meetup organizer Aaron Price said, “When I first met Sen. Lautenberg, it struck me that he was a true entrepreneur. He talked about starting ADP by borrowing a really junky office in the basement of an even junkier old hotel.

“I found him understanding of the needs of entrepreneurs and forward thinking on the role that startups and technology play in both the state and [the] nation’s economic growth. He expressed pride in the NJ Tech Meetup community and was eager to attend an event to feel the startup energy all over again,” added Price, who is also a tech founder at weCraft.

New Jersey Technology Council (NJTC) founder Maxine Ballen recounted a similar experience with Lautenberg. The NJTC, which represents about 1,000 N.J. tech companies, makes an annual Tech Trek with some 20 N.J. CEOs to Washington to talk with elected officials about the legislative needs of the state’s tech industry.

“Usually, instead of talking policy and politics with the CEOs and me, the senator wanted to talk about having founded ADP and … about issues of running a tech company, as well as the impact of ADP on New Jersey and the region and the country,” recalled Ballen.

Ballen said she would try to get Sen. Lautenberg off that topic and move him toward politics and the issues facing the industry, but “he didn’t want to have anything to do with that. He loved talking to tech people about having founded a tech company,” to the discomfiture of his aides, she said.

Asked whether Lautenberg was an advocate for the N.J. tech industry, Ballen said that in his later years he was less supportive than her members would have liked. Other issues were more dominant to him, she said, in contrast to Sen. Robert Menendez, who did champion the industry.

Nevertheless, noted Ballen, “Sen. Lautenberg did so much for New Jersey. At the end of the day … I would have given him an A-minus on being there and understanding the issues that were near and dear to my community.”

Joel Bloom, president of New Jersey Institute of Technology (NJIT) (Newark), noted that Lautenberg had supported many of that university’s initiatives: “Upon his return to office in 2002, Sen. Lautenberg’s strong advocacy for child-safe handgun legislation fueled NJIT’s efforts to produce a biometrically controlled handgun. His unwavering support for this program over the next decade has resulted in a working prototype that advances the state of the technology for gun safety.

“In his role on the Senate Defense Appropriations Committee, he ensured Senate support for funding for a number of defense-related research and development projects that sustained NJIT’s partnerships with New Jersey military bases and supported U.S. defense and domestic security priorities,” added Bloom.

Lautenberg visited Stevens Institute of Technology (Hoboken) with then-Federal Communications Commission (FCC) chair Julius Genachowski on April 11, 2012. His aims were to generate interest in an economy fueled by the development of mobile apps and to talk about his America Innovates Act, which he had hoped would spur the growth of high-tech jobs.

At that event, calling himself the “marketing guy” for ADP, Sen. Lautenberg said that — unlike leaders of today’s startups — he hadn’t had a great vision for what ADP might become.

“Honestly, we weren’t clairvoyant. We didn’t talk about the days when we would be a giant company. We went to work every day. We were poor boys and we knew that our mission in life was to make a living, and that’s what we tried to do.”

When the first viable commercial IBM computer came along in 1961, said Lautenberg, “it gave us the engine to pull us along, and then growth was incredible … I’m often asked, ‘Who among the three of you was the technology person?’ ” he said. “We didn’t have one.” For fiscal year 2012, ADP employed some 45,000 people and had $10.7 billion in revenue.

“We are saddened to learn of Sen. Lautenberg’s death,” Dr. Nariman Farvardin, president of Stevens said in a statement.  “As an innovator, entrepreneur, CEO of a major technology business, and in his roles as a public servant and Senator, Senator Lautenberg is an exemplar for future generations.  His advocacy of science and technology has impacted our research here at Stevens and at educational institutions across the country.  We will miss his leadership and support in the Senate.