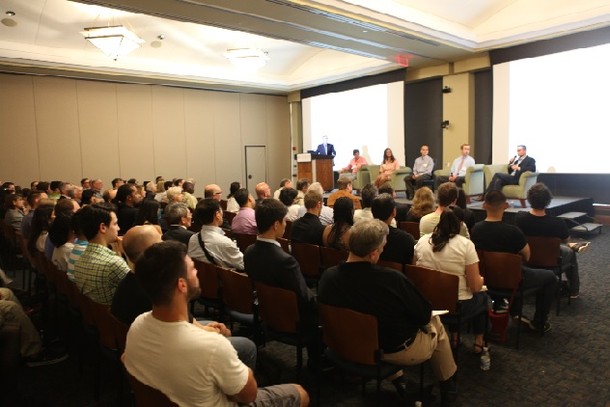 [Annett, a startup entrepreneur, is president of Livingston-based Annett Enterprises.]

The meeting, which attracted more than 60 attendees, began with Feliciano Center director and former Verizon New Jersey President and CEO Dennis Bone announcing the center’s goal: to serve as an entrepreneurial hub within the university, through which students receive real-world entrepreneurial experience. The meetup’s goal is to provide outreach to the local aspiring entrepreneurial community, Bone said.

The two speakers chosen for the night matched those goals perfectly.

First up was Daryl Bryant, cofounder and CEO of StartupValley, an equity crowdfunding portal that is in beta while the U.S. Securities and Exchange Commission (SEC) finalizes its crowdfunding regulations.

Bryant, an MSU alumnus who graduated 13 years ago, is also president and CEO of multimillion dollar Hudson Horizons (Saddle Brook), an integrated Web agency. During the introduction, the group discovered he was leaving early the next morning to be an invited guest at the White House.

Bryant said he had been an entrepreneur even as a child. In college, he and some fellow students started Liquor Lamps, which converted empty liquor bottles they had obtained for free from local taverns into lamps they sold to other college students. The business was thriving and growing until it received a ‘cease and desist’ order from the maker of Jack Daniel’s.

From there, Bryant used the skills he had acquired selling lamps and other skills developed at another employer, Knoa Corporation, to found Hudson Horizons. He told the audience this has strategically positioned him and his fellow StartupValley cofounders, Matt Mayernik and Adam Smith, to be at the forefront of the equity-based crowdfunding market.

Once the crowdfunding rules are published, said Bryant, StartupValley will be a fully functioning portal that will let tech startups and businesses raise capital for their companies through “the power of the crowd.” Specifically, they will be able to use investment by nonaccredited investors in exchange for an equity share in their companies.

Bryant explained the history that has led to equity-based crowdfunding and how crowdfunding will provide entrepreneurs new opportunities. He noted that the point of his talk was to reach out to the entrepreneurs in the audience and encourage them to ignite that “fire in your belly and that burning in your heart” to pursue their entrepreneurial dreams.

Next up were Cheryl Biron, president and CEO, and Louis Biron, chief operating officer, of One Horn Transportation (Wayne), which the pair said is among the 50 fastest-growing women-owned/women-led companies in North America as ranked by The Women Presidents’ Organization and American Express OPEN Forum.

The Birons, who represented the greater entrepreneurial community, started their presentation by contrasting their story with Bryant’s. Not natural-born entrepreneurs, they had come to the entrepreneurial world from secure corporate positions.

The wife-and-husband team decided to leave the corporate world to start a trucking company. Although Louis had knowledge of the industry — which was how they were able to receive bank financing by leveraging their net worth — the couple had no idea what running such a business day to day entailed.

Cheryl and Louis Biron not only learned quickly but systematized their learning process into a strategic planning one, the key to their success.

According to the Birons, the learning process, which can be used to evaluate any business or system, involves:

·       Looking at the jobs performed within that business.

·       Examining the activities performed within the business.

·       Asking whether the business’s current activities are scalable. This question appears to have lead the Birons to numerous pivots and their current success.

·       Reinventing the business to achieve lasting, 10x growth. This led the Birons to eventually sell their entire truck fleet and switch to the truck brokerage industry. When reinventing a business, they emphasized, you should always consider automation before you hire someone for the back office.

·       Continuously learning, whether through books or mentors, with the goal of doing more of what works and less of what doesn’t. Informal boards of advisers can also help with this, and regularly meeting with a group of entrepreneurs who have experienced similar challenges can help entrepreneurs achieve success and avoid failure.

·       Finally, examining revenues to determine if they are in line with goals.

The meeting then proceeded to a Q-and-A session. It closed with a comment by the center’s namesake, Edwin Feliciano, that what differentiates successful entrepreneurs from the rest is that for them, “failure is not an option.”