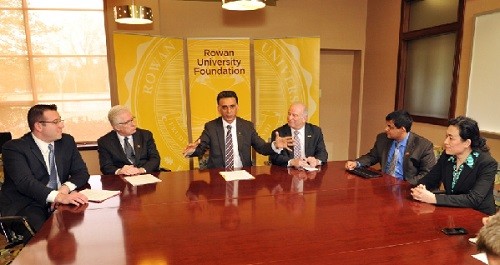 The Rowan University Foundation, the fundraising arm of Rowan University (Glassboro), has allocated $5 million to a venture fund to help take young companies that started at Rowan or were founded by Rowan alumni, to the commercialization phase.

The foundation is allocating these funds at a rate of $1 million per year, to be invested appropriately among university companies according to their needs and valuations. The monies have already been set aside for the fund, R.J. Tallarida, the foundation’s executive director, told NJTechWeekly.com in an interview.

The foundation hopes that the ability to invest in Rowan companies will inspire university alumni and friends so it can increase the fund further.

The overall goal of this initiative is to increase economic development in South Jersey, university officials said.

The idea of a university foundation — which usually undertakes building projects and the like — funding companies that started at that university isn’t new, but to NJTechWeekly.com’s knowledge this has not been done before in the Garden State.

According to Tallarida, the foundation studied the model provided by the New York University Innovation Venture Fund for guidance. A release stated that the foundation had spent a year examining other college venture-fund models.

The exact mechanics of how the fund will work to evaluate companies have not been set, said Tallarida. The foundation will soon appoint an advisory committee comprising business leaders, financiers, entrepreneurs and other individuals with biotechnology, biomedical, engineering and venture capital expertise. The advisory committee will provide real-world expertise to assist the technology/new venture development committee in selecting recipients.

Tallarida said that since the venture fund was announced, the foundation has received a lot of positive buzz from venture professionals and others who consult with funds and are hoping to help out with this endeavor.

The idea behind all this is to encourage some of the research generated by the university to take a step toward commercialization. “While Rowan’s students and faculty will undoubtedly be successful in attracting outside funding, some may need seed money to get their ideas started,” Paul Tully, foundation chair, said in a release.

Nothing specific has been determined as far as a standard for equity taken by the fund, Tallarida added. “Equity and terms will be decided on a ‘case-by-case basis’ and worked out between our experts and the companies pitching the fund,” he said.

It isn’t just tech transfer — an outdated concept, according to Ken Blank, vice president for health sciences — that’s involved. Rowan wants to help create viable companies that will contribute to the area’s economic engine and create jobs there, he said. While the university believes many of the companies could get funding on their own, the venture fund will help them.

Tallarida said he hopes university alumni and friends will be willing to make donations to the foundation that are earmarked for the fund so they can do even more for Rowan’s startups.

Many university startups are already on campus, Shreekanth Mandayam, vice president for research, said. Moreover, many of Rowan’s patented or patent-pending ideas are ready for commercialization. Some can be found here. Most seem to be based on biotech and medicine, but some intriguing digital tech research projects could become businesses.

One such possibility is Rowan Virtual Meeting, a Web-based multimedia software environment that lets two or more people communicate with one another over Voice over Internet Protocol (VoIP), Web video and chat and collaborate using a whiteboard, PowerPoint and other such applications. Another idea ready for commercialization is a website navigation tool that lets users easily navigate the website regardless of its complexity. Users are provided a treelike graphical image that monitors their browsing on the site in real time.

Rowan University was designated the second comprehensive research institution in New Jersey last year. “That furthers Rowan’s drive to increase its commercialization and technology-development efforts, particularly in high-growth sectors such as engineering, medical education, health sciences and business,” the school said in a statement.

Previous: Phorum 2014, to be Held April 10 During Philly Tech Week, Has Powerful List of Headliners
Next: As Maxine Ballen Announces She Will Leave NJTC, Community Reacts