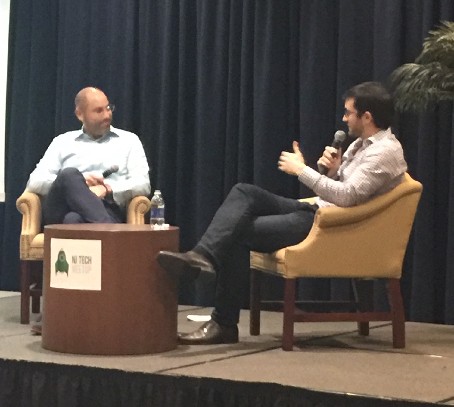 Capel was the featured guest at the November NJ Tech Meetup,  held at Stevens Institute of Technology (Hoboken). During a Q&A with the group’s founder, Aaron Price, Capel explained how he went from employee to entrepreneur.

Before founding Sailthru, which customizes brand content for companies such as emails to send to customers, Capel worked as a fixer of failing websites. “I was doing redevelopment of sites that weren’t scaling. I would get called in to keep them alive while the business was running.”

While doing that redevelopment work, Capel noticed a recurring problem. “There was something in every case that was inherently annoying to me: that we were annoying our consumer. It didn’t matter if it was a reader of our publication or a buyer of our software, we would just annoy the crap out of them until they converted.”

Capel said that his father used those close relationships with his customers to survive the competition of the larger supermarkets. “Because of the service, because of the brand, he actually fought off the supermarkets. He would interact with [customers] every single time they were in the store, and just make sure they always had a fantastic experience.”

Having seen that success, Capel knew he could solve the problem he was seeing of companies mismanaging their relationship with customers. Still, he needed a push to pursue putting that solution to the test. He was redeveloping a site during a hectic Christmas season when he realized that he needed to go into business for himself. “I worked every single minute of every day I was alive. I stripped down the system and rebuilt it back up to get this thing live by a public launch date, and at that point I thought, ‘I am not getting paid enough for this. I have to work for myself.’”

After Capel described the effort involved in founding Sailthru, Price asked Capel if he thought an entrepreneur could start a business on the side while still having a primary job. Capel was doubtful. “The chances of getting a business off the ground and funded are small. If you’re doing it on the side, it’s really hard. Chances are the business is going to need more than 100% of your time.”

The conversation then shifted to funding. Capel said that he had reached a point when he realized that he needed to raise funds to sustain Sailthru, but he didn’t know much about asking for money. “I was scared of it. I didn’t know what I was doing. I had no clue where to start.”

Since he didn’t know where to start, Capel went everywhere. “I went and pitched as many people as I could in as short a period of time as possible. That worked out quite well because I actually created artificial buzz. Everyone in the VC community was saying, ‘Oh, have you seen Sailthru.’ Because I crammed them all in a three-week period, they didn’t have any chance not to.”

Capel was eventually able to raise $45 million. He gave the audience some advice on the process. “The best way to do it is to work backwards. It’s going to take three or four months for any kind of fundraising, whether it’s a seed round or an A, or a B, or a C. You work backwards from the four months out. You say that’s when I want to sign a term sheet. If you want to sign a term sheet then, you better have final meetings the three weeks beforehand. Then come forward a bit more and say I need to be having really good conversations with some of the VCs here, and I need to be having a lot of conversations with a lot of VCs these couple of weeks.”

In response to a question from Price, Capel offered some motivating words to the audience about building momentum during the fundraising process, especially in the face of rejection.

“You’ve got to hustle like hell. You’re going to get ‘no’ every which way you go, and you have to just keep going through. You have to have absolutely unshakeable resolve and belief that you’re going to do it.”

“When so many people tell you ‘no,’ it drives you mad, but for me it drove me further,” Capel continued.  “If you believe in it, then you should run through every single wall to do that, and I think that’s the energy you need to propel into the fundraising process.”

Previous: District and Charter School Students Come Together to Learn Coding
Next: New Jersey Tech and Pharma Companies on the 2015 Deloitte Technology Fast 500