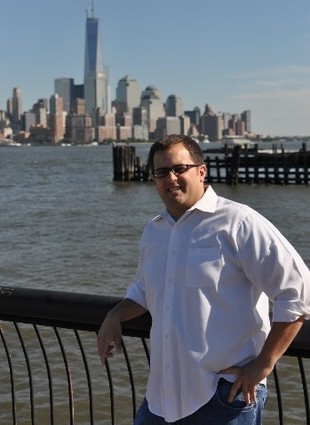 NJTechWeekly.com recently interviewed Peter Verrillo, CEO and cofounder — along with Michael Phipps, chief product officer, and Ed Paulosky, CTO — of Enhatch, a startup we first encountered at several New Jersey Technology Council (NJTC) events and whose May 2012 NJ Tech Meetup demo we then covered. Enhatch is based in Hoboken and has an office in New York. The company currently employs eight people and is growing.

Enhatch has come a long way since its early pitches. At the NJ Tech Meetup, serial entrepreneur Verrillo had shown off a product that could demonstrate 3-D modeling and animation on an iPad. It was aimed at sales forces in the medical devices industry. The 3-D modeling had a “wow” effect, showing dynamically how, for example, a medical implant could be placed in a body.

Enhatch says it has since expanded the product’s technology platform to let companies develop their own beautiful, interactive, compelling apps for their sales teams. The company’s mission is to make complex sales easy, though 3-D capability, once the focus of the app, is still an important feature.

With each iteration, Enhatch’s products get closer to the goal of providing customers the ability to put together the apps themselves. This approach to the market has brought success to Enhatch, which is making enough revenue to sustain its efforts and continue to grow without having to take VC money, yet.

Please tell our readers about your background.

Enhatch is my third startup. After graduating Stevens Institute of Technology (Hoboken) I joined a small company working on using PalmPilots to track medical device inventory. That ended in 2001, like many other startups, and I went to work for Stryker Orthopaedics.

In 2005, I started a company with two friends from college to develop a shoulder implant. That was acquired in 15 months by a larger startup after we had filed patents on the technology and gained Food and Drug Administration approval. That company was acquired six months later by Tornier, which IPO’d in 2011, and our product line is still their top-selling device as well as one of the fastest-growing shoulder implants in the United States.

Do you have strong ties to New Jersey and Stevens?

Just about everyone technical in our company went to Stevens. I tend to hire technical interns from there, and now I am looking at their business technology program to hire sales development representatives. For this role, you want someone technical but savvy in business, marketing and communications.

Since we are located in Hoboken, we find it is easy to work with the Stevens cooperative education program, which is available all year. We’ve had a lot of success with students from this program, and many of my former engineers have started this way. There is one trick: you have to think three or four months ahead and interview people in advance of when you actually need them.

How has your company evolved?

About a month after pitching to NJ Tech Meetup, Enhatch was accepted into the Blueprint Health Accelerator in SoHo (and we still have an office there). We received $20,000 in capital, about $50,000 in perks and plenty of great mentoring and advice.

We initially pitched the app to the financial services market and to the manufacturing sector, specifically the Transportation division at General Electric. In the beginning, they were sold on the platform and ability to build apps themselves. As they started using the platform, the 3-D visualization was helpful to help describe some of their products to their customers.

We have built a platform that helps sales and marketing professionals explain their value proposition in their own way, for almost any vertical. Although we are focusing on certain markets now, any company with complex products can benefit from our technology.

What have you learned from your experience at Blueprint?

We learned at Blueprint that you have to articulate the problem you are solving for your customer. Most startups “feature-vomit” their pitch to customers and lose the sale. Blueprint was very active in the sales process, including who you were selling to and how you were pitching them. Listening to our customers has served us very well, and we are now generating enough revenue that we can sustain our business and are considering taking on venture capital to accelerate our growth. We are seeing very good adoption in really large companies as well as in smaller companies in several verticals.

Who are some of your customers?

Enhatch distributes our customers’ mobile apps through the Apple App Store. Our most recent launches have been with two divisions of General Electric: Power and Water, and Transportation. In the medical devices space, we have deployed apps for Paradigm Spine (New York). What I really enjoy about our customers is that they all face similar challenges, whether they are trying to sell a newly approved spinal procedure or a locomotive. There are hundreds of documents, videos and 3-D models required to explain why their product is better than their competitors’ products, and our technology helps the marketing team understand how the sales teams use that information to convert business.

Where do you stand now?

Every new release of our product has solved some major technical hurdles for our customers. Our initial “concierge” release prior to Blueprint proved we could build a platform that could build very basic apps. Our beta release began in March and proved that anyone could build really interactive and customized apps quickly. But our customers were struggling with some other major challenges when selling their products, and our most recent release solves a major problem for them, integrating our apps with customer relationship management (CRM) software. Because sales and marketing are so intertwined in the enterprise, we continue to focus on two key aspects of our technology: making it easy for our marketing teams to own the app-building process and making the app more functional to help sales teams close more business.

Previous: Verona Must Spend $500K on Tech to be Ready for State Testing
Next: “Business Brilliant” Author Describes Way to Wealth and Startups Pitch at July NJ Tech Meetup