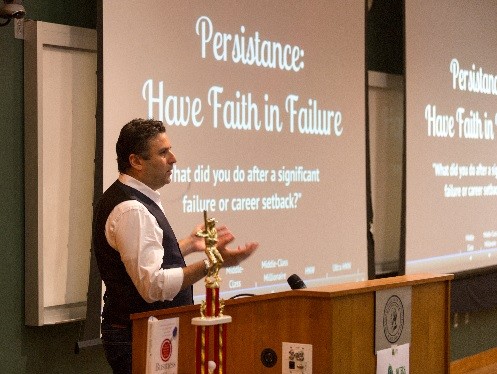 At the July 24, 2013 NJ Tech Meetup, several startups pitched and Lewis Schiff, author of the book Business Brilliant and executive director of Inc. Business Owners Council, spoke to an audience of more than 120 CEOs, developers and others.

NJ Tech Meetup takes place monthly on the Stevens Institute of Technology (Hoboken) campus. The group has grown to more than 3,200 individual members. Each meeting includes networking, startup pitches and a chance for audience members to ask for help with their projects or new companies. The main event features a speaker who demonstrates best practices or otherwise inspires the tech audience.

Schiff spoke to the group — composed mostly of pre-revenue startup founders — about how companies with revenue create their wealth. He said he hoped the audience would orient its thinking to understand how companies that end up creating enough wealth to have a “liquidity event” such as a strategic exit or an IPO really work. He added that he knows one difference between the technology world and other businesses is that creating wealth is sometimes a secondary goal in tech.

For those who want to create wealth, Schiff suggested determining what you do really well and finding a way to build a business around that. He noted that many executives get drawn away from their focus area and have to put out fires, addressing problems that crop up in the business. The really successful billionaires find a way to spend 80 percent of their time focusing on what they do well and just 20 percent putting out fires, he said. They have built an innovative organization that lets them do that.

Before Schiff’s talk, the first startup to present was iBE.net, a New York-based company that offers solutions to smaller firms needing a comprehensive approach to managing their businesses. The startup says it has an answer for companies that are “too big for QuickBooks and too small for Oracle.” IBE.net’s CEO and director of customer support are based in Princeton.

Speaking for the company, cofounder Simon Hopkins said, “When [cofounder] Richard [Minney] told me his vision for iBE.net a couple of years ago, I think I laughed. Just what the world needs—another enterprise software company.” However, the idea took root because it fulfilled a genuine need, he said.

“The fact is that small businesses have exactly the same business problems as the Fortune 500, except for them, the software that is available is overly simplistic, lacks industry functionality and is too expensive,” Hopkins noted. He said iBE.net, designed from the ground up and using cloud features, provides functionality at an excellent price. IBE stands for “integrated business environment,” he added.

The company took a “mobile-first” approach to the product so that messages could be pushed to users, who could then enter data easily using a mobile device, said Hopkins. IBE.net expects to have 50 companies and 2,000 users on the system by the end of 2013, he added.

“The big deal is that we are allowing the little guy to gain full-time insight into his business without the need to spend additional dollars on enterprise licenses,” Hopkins concluded.

Up next was Michael Bailey, cofounder of Geekrowd, a social platform startup that believes social is better when you are around people with the same interests as you. The company isn’t built on the backbone of Facebook or Twitter, Bailey said, noting, “We are not the next Instagram, but you can build it using us.”

Geekrowd offers a software product called Kroud.io, a social platform as a service that lets users build their own social networks based on interests. Bailey said large social networks are moving so fast that they can’t fix the problems they incur.

“The real problem with social networks is they are based on linear relationships with people and not [on] the things we are interested in,” he said. Kroud.io software lets groups make their existing communities more social, and “you can even spin out a private network for your guys’ weekend in Vegas,” he said.

Geekrowd  has a tiered subscription-based business model and can scale for larger networks, Bailey noted. The company also has an adverting network that can allow communities to make money.

Just after the meetup, Geekrowd moved to Boulder, Colorado, to be closer to potential investors, Bailey said in an email. However, he noted, the company is still working with a couple of New Jersey and New York companies to help them launch their minimum viable products.

“Our product has matured into an open beta and [is] set for a production launch in November to coincide with one of the New Jersey startups we are working with,” Bailey said in an update.

The final presenter and winner of the Audience Choice award was Jeremy Hamel of New York-based Sproute (renamed StayHub), makers of a destination-booking engine. The company has approached hotels with the idea of turning their websites into a Web app, thus allowing them to connect guests with everything they need for their destination. In most cases, those who sign up for Wi-Fi at a hotel are linked to the provider’s website, so the hotel has lost that branding and e-commerce opportunity.

With the StayHub app, said Hamel, “If you are a traveler, no matter what you want to do in town, you can use one simple application to do it. If you are on the property and plug into Wi-Fi, you’ll land on the website.”

StayHub’s business model is straightforward: it plans to charge hotels $5 per room per month. Almost all the integrations (with tour companies, nearby restaurants and so on) are revenue-generating, Hamel said, so the cost should be recouped quickly.