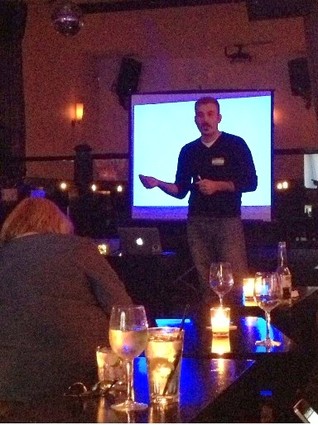 Meddle: Vidar Brekke is bringing Meddle (Atlantic Highlands), a microblogging platform that he developed with cofounder and CTO Ballu Kommireddi, out of stealth mode. Brekke gave a demo of the product at a recent NJConnect Meetup  and at other area meetups and exhibited at NY Tech Day. NJTechWeekly.com will have more on his April NJConnect Meetup  presentation in the near future.

Brekke said he had created Meddle as a way for busy professionals to showcase their know-how as part of their daily routine. It lets them grab relevant snippets of content from news items, white papers or anything they read online and then comment on those snippets.

Said Brekke, “Most professionals can’t set aside hours to craft an insightful blog post.” But with Meddle, “authors are able to spend a minute or less creating and sharing a key insight that may reflect decades of experience.” Brekke says he doesn’t seek to replace existing social networks, noting that content created via Meddle can be optimized and published to current social media sites. Meddle newsletters can aggregate the newly developed content.

Aginova: Freehold-based Aginova is launching a Kickstarter campaign for its iCelsius Wireless project. The company, which has been working with sensors in the commercial marketplace, argues that the time is right to use them in the consumer market. Aginova has combined Wi-Fi with sensors to make home monitoring easy, it says. A big challenge the company has had to overcome: Wi-Fi. Battery life in wireless devices is always an issue, Aginova notes on its Kickstarter page.

The firm decided to use “a rechargeable battery (which is not the paradigm used for wireless sensors) so you do not have to keep changing batteries,” said a company statement. The products being released include barbecue probes for grilling and cooking, IP probes for food inspection, an RH probe and indoor air quality monitor, and a body temperature probe. The sensors work with the iPhone, iPad or iPod touch, or with Android smartphones and tablets, via already developed apps that can be downloaded from the iTunes Store or Google Play. The apps will read the sensor data, create graphs, set up alerts, store data, and email graphs and support data to Excel. The iCelsius Wireless product line starts at $79 on Kickstarter.

Fintelligent: Fintelligent (Berkeley Heights), which describes itself as an “on-demand financial department,” has launched a free Ask the CFO service aimed at the startup and small-business market. Robert Ripp, Fintelligent president, says he feels startups’ pain and confusion because he relaunched the company in September 2012.

Using Ask the CFO, anyone can get answers to specific questions about anything they might ask a chief financial officer: about growth strategies, fundraising, improving cash flow, technology and much more. Those seeking answers can browse all the Ask the CFO content without having to register, or they can sign up to ask and answer questions. Typical questions: Do I need a CFO if I have a CPA? How long does it take to exit a business? and How do I build a financial model?

SpeechTrans:Yan Auerbach of Lyndhurst-based SpeechTrans  says his company’s application programming interface(API) has been successfully integrated into the HP MyRoom  videoconferencing solution, which is preloaded on each of the 10 million laptops and desktops that will ship this year. Version 9.5 of MyRoom will go live on May 4, 2013, and will enable 500 participants on a videoconference bridge with speech-to-speech translation powered by SpeechTrans.

The company has also become a Microsoft Managed Partner and, said Auerbach, the first developer on the Windows 8 platform offering dictation and speech-to-speech language translation as part of its SpeechTrans Ultimate application.

Microsoft plans to feature the SpeechTrans capabilities in its marketing campaigns starting April 30, 2013. SpeechTrans said it had improved the speed of optical character recognition in its feature that takes a picture and translates billboards, signs, menus and documents.