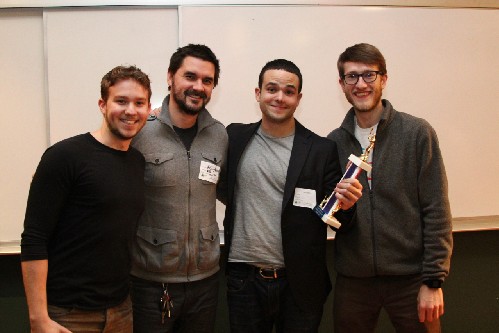 The NJ Tech Meetup (NJTM), held at Stevens Institute of Technology (Hoboken) Jan. 9, 2014, featured startup pitches from three new companies, each of which relies on a sense of reinvention.

One of the startups wants to create online communities for mothers, another hopes to replace decades-old clothing size standards and the third wants to reinvent what parents send in care packages to their college children.

Sarah Himmelbaum, founder of Mommies 24/7 (Hoboken), made the first pitch. The company, which is located in the Mission50 coworking space, builds local websites that help mothers network online and in person.

Himmelbaum started her pitch by sharing a tragic event: she had given birth 24 weeks into her pregnancy to a baby girl who passed away a day later. Himmelbaum was shaken by the experience.

“I instantly thought, I have to find someone else that went through this,” she said. “All I needed to hear was, ‘That happened to me. It’s going to be fine.’ But … I couldn’t find that community. I knew they were out there; I just couldn’t locate them.”

Himmelbaum later gave birth to a healthy baby boy, but, as in the aftermath of her first pregnancy, she struggled to find a sense of community among other women in the same situation.

In response, she created Mommies 24/7. The websites let new mothers connect with one another, publish original content, disseminate product reviews and recall information, and vet vendors and service providers. Through the sites they can also share local news and organize events, such as expectant mothers’ socials and fun post-birth nights out.

The first Mommies 24/7 site served Hoboken. Within hours of its launch it had 700 members and in two years grew to more than 10,000. The company now covers several other New Jersey towns, including Montclair, Nutley and Summit, and Himmelbaum said she has plans to expand to similar suburban areas in other states.

Each Mommies 24/7 site has a “mommy mayor,” the site’s editor. Himmelbaum said the company makes money through dedicated emails and affiliate marketing and by connecting sponsoring brands with mothers, a group she says possesses more than $2 trillion in purchasing power.

“If you look around, everybody is built in a … different way, so it’s no surprise that it’s hard to find clothes that fit when we’re stuck picking between just a few generic sizes,” Hornbuckle said.

The company, which also has offices at Mission50, relies on what Hornbuckle called “data-fit technology.” Stantt has collected more than 200,000 unique body measurements and more than 1,000 digital body scans to define at least 50 new sizes. However, the company asks customers to submit just three measurements: chest, waist and sleeve. Stantt’s computers then match each customer with a well-fitting shirt.

Hornbuckle said Stantt has already filed design patents. For now it is focusing on buttoned dress shirts in basic colors such as white and light blue, though it hopes to expand to other types. The shirts are 100 percent two-ply cotton, and though the company has to import its cloth from Europe, its manufacturers are in the United States. “In two years I don’t remember how many manufacturers we talked to, but we’ve found the ones that we feel can deliver what we need,” Hornbuckle said.

Pijon curates care packages parents can send their college children. The packages feature about six new brands each month in categories such as nonperishable groceries; personal care items, including health, beauty and grooming aids; essentials that students forget to buy, such as cleaning products; and fun accessories and gadgets, like touch-screen gloves.

Caucci said traditional care package companies overcharge for subpar items. Pijon’s packages have a retail value of $30 to $50 for a price between $25 and $29. Most of the items come from new companies, although Caucci said Pijon is negotiating with larger brands.

The company launched in August 2013 and has already sent more than 16,000 boxes to 3,300 students at 950 colleges in all 50 states. It has also begun selling featured items separately.

Caucci said the potential market is large. “There are over 20 million 18- to 23-year-old college kids in this country just now developing an affinity [for] and loyalty to the brands they’ll be doing business with for the next 60 years,” he said, adding that related markets could include summer camps, military bases and prisons.

Pijon asks for email feedback from both senders and recipients. So far it says it has collected more than 6,500 individual product ratings each month. Caucci said this information should entice sponsors to pay Pijon to put their products into packages. “We’re driving direct sales for our brand partners; we’re putting measurable ROI around product sampling,” he said. “Not only are parents buying more for their kids, they’re actually buying some of the products for themselves.”

After Pijon pitched, the audience voted for the evening’s audience choice winner. The NJTM repurposed childhood sports trophy was awarded to Caucci and his partners at Pijon.

Previous: Science of the Big Game: The Technology Under the Hood at the Super Bowl
Next: NJ Said to Court iPhone Manufacturer Foxconn