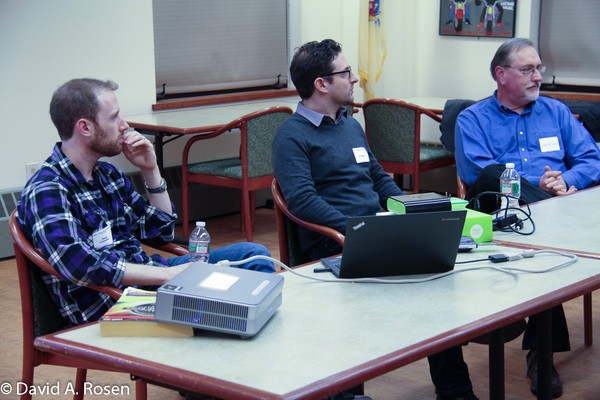 At the Manufacturers, Inventors & Tech Hardware Startups of NY & NJ meetup, on Jan. 22, panelists provided insights into how they made decisions about prototyping and manufacturing.

More than 55 people attended the event. All the presenters brought their physical products to the meeting.

David Rosen, co-organizer of the meetup and developer of TechX Foundry, talked about his company, which will be coming to the Secaucus area.

He said, “TechX Foundry is a sharing economy model for designing, prototyping and manufacturing. TechX gives access to thousands of people who are eliminating capital costs and sharing millions of dollars in equipment while having access to experts.”

TechX Foundry will include TechX FabLab, which offers an array of equipment for electronics, metal, wood, plastic and specialties.

TechX WorkSpace will be an office facility for quiet work and an industrial space that can be configured as needed. TechX Innovation Sciences will focus on contract manufacturing services and innovation consulting.

Following Rosen’s preliminary remarks, the panelists introduced themselves and gave some advice to those who want to start a hardware startup.

First to speak was Lee Miller, founder of Kittyo, a company providing a device that lets users interact with their cats when away from home.

Kittyo had a very successful Kickstarter campaign, meeting its goal in 20 minutes. The reason: The company had collected opt-in emails prior to starting the campaign.

Miller listed his challenges as finding the right design partner, the right manufacturing liaison, a suitable contract manufacturer, and sourcing components. He also said it was a challenge to fund the project at every stage.

His advice to the meetup attendees: Collaborate with an established design firm that has worked with manufacturers before.

Miller added that a startup should start working with its manufacturing liaison before the design is finalized. He also advised startups not to go to their contract manufacturers without a complete turnover package, including provisions for inspection criteria.

The process takes more time than startups ever imagine, he noted, so they need to budget enough money to cover the entire launch effort.

Miller said that the number of decisions that have to be made is “mind-blowing,” and he advised startups to work with manufacturers who have already brought products to market successfully.

John van Saders, executive vice president and chief operations officer of Anadigics, brought the point of view of an established company to the table.

Anadigics, a leading provider of radio-frequency-semiconductor solutions in the broadband wireless and wireline communications markets, has been in business since 1985 and is publicly traded. The company’s main plant is in Warren, where it does wafer processing, but Anadigics also has operations in Asia, including assembly plants in the Philippines and in Guangdong, China.

Van Saders noted that it is important to have experienced people on-site in overseas locations. If a manufacturer chooses not to be on-site, and things go wrong, especially in a high-volume business, a very small problem can turn into a very big problem.

Rosen observed that, unlike the two startups on the panel, Anadigics was able to approach the overseas management processes more methodically, primarily because it had procedures in place and was a more mature business.

Doug Crescenzi, cofounder and CEO of Lono, talked about his product, a Wi-Fi-enabled sprinkler controller that takes atmospheric data so it can save water when it rains. Crescenzi said that the company, which outsources some manufacturing to China and does the rest in the company’s home, in Salt Lake City, said that Lono had run into problems ranging from sluggish iteration cycles to dealing with emissions testing.

He advised companies that are working with Wi-Fi to make sure they work with experts in radio-frequency technology.

Some problems Lono ran into were somewhat unique to its product. For example, the company staff wanted to apply over-the-air updates to firmware in the product, but that was a problem until they were able to determine the correct protocols and processes.

Crescenzi advocated the notion of “should cost” modeling.  When a company is specifying out its costs, it should ask why a particular spec is 5 cents cheaper from a different supplier.

He also advised companies to talk to as many potential manufacturing sources as possible, and pointed out that the design of the product should incorporate manufacturability principles.

He said that another lesson learned was to get feedback from early adopter customers, who are generally willing to give feedback because they are passionate about the product.

Overall, people were the greatest concern vocalized by the panel and the audience. Access to skilled engineers, craftsman, or designers is critical to any of the new-product development methods discussed.

The interaction between the panelists and the was high, and the only thing stopping the conversation and ending the meeting was the closing of the venue.