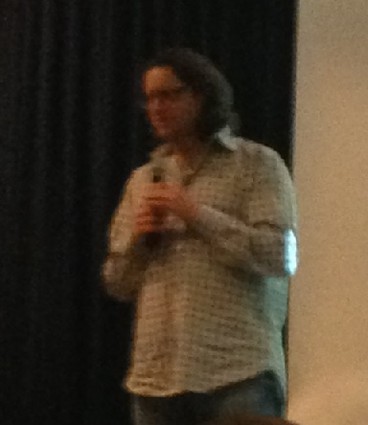 Brad Feld, author of Startup Communities: Building an Entrepreneurial Ecosystem in Your City, addressed NJ Tech Meetup on April 15, 2013, to speak on this topic and others important to entrepreneurs.

His was a timely message. Host city Hoboken has been trying to create the elements of a tech hub for more than a year with the help of the NJ Tech Meetup community. Unfortunately, however, plans to make the city more tech startup-friendly have been temporarily halted due to Superstorm Sandy’s impact.

Nevertheless, Feld expressed much-needed appreciation to Hoboken for the building it had offered the tech community to nurture startup activity.

For the most part, said Feld, governments shouldn’t be directly involved in funding startups. They are traditionally terrible allocators of capital, he asserted. However, he said, they can create a framework that uses the ecosystem to help entrepreneurs nurture one other, as Hoboken has done.

Feld provided the startup founders advice they don’t usually hear: their families are important, and it’s important to think about things other than their businesses. He recommended that they take a week off, or at least a long weekend, every quarter. This will help them reconnect to their spouses and families and the larger world, he said.

NJ Tech Meetup is the state’s largest tech community, with 2,800-plus members. The group meets monthly on the campus of Stevens Institute of Technology (Hoboken), with some 150 tech enthusiasts in attendance. The meetup’s members include entrepreneurs, software engineers, developers, investors and consultants.

Hayes recounted that in New York, there was much confusion after the storm over where someone could go to get warm. One problem: New York has its own shelter system — it doesn’t use the Red Cross’s shelter program. The NYC- created PDF that details shelter locations and hours — which can be downloaded or printed out before a disaster hits — contains information that differs from what is provided on the city’s own website, which is also hard to navigate.

Sparkrelief has worked on the problem and created its own crowdsourced alternative, which  makes it easier for residents to find shelter if they must evacuate. The organization seeks good designers and developers to further its efforts.

NJ Tech Meetup founder Aaron Price announced that the group is trying to form its own angel network to support the work of New Jersey startups. Price believes the network will be called Rocketfuel, but no further details are available.

Attendees heard from the three startups scheduled to present that night. First up was Andy Josuweit of New York-based Student Loan Hero, whose website has already gained traction. The company was part of Start-Up Chile and is a Socratic Labs (New York) portfolio company.

“Student loan debt is now the second largest source of household debt,” Josuweit told the group. There is, he noted, an alarming number of loan defaults, which puts colleges at risk of denial of government funding, affects banks and harms the credit histories of those who default.

Student Loan Hero helps students lower their monthly payments, extend the terms of their loans or find other financial products to lower their interest rates. Users must create an account and aggregate all their finances on one dashboard. Based on information collected, including socioeconomic data, the site can set students up with programs that will lower their payments. Josuweit said the company is currently managing $2.8 million in monthly payments.

Pitching for Princeton-based Oventio, Atul Sud presented a clever way for salespeople to meet prospects. The company, which is based in the Tigerlabs (Princeton ) coworking space, has developed a contact engine that helps locate sales prospects by determining where they will be speaking at conferences. After all, said Sud, the success rate for cold calls is only one in 112.

If you know where and when prospective clients will be speaking, you can attend those sessions, wait in line and shake their hand. “Speakers and panelists generally will meet with anyone who stands in line to meet them,” said Sud.

Oventio has created a consolidated database that aggregates information from conferences and events across the country and the world. It is searchable by multiple topics, titles, prospects’ names and companies, sponsors’ names and more.

One observer likened the product to “stalking with a purpose,” and, sure enough, Oventio provides a way for individuals to decline to be in the database. The company said it is launching Salesforce customer relationship management (CRM) app integration.

The final presenter was Victor Dweck of Socii, which offers a simple way to reward word-of-mouth marketing on social media. Although the startup is from New York, all three founders grew up and still live in Monmouth County.

Dweck said it is a huge problem for businesses to engage customers this way: “We primarily go on social media to connect with our friends and not with businesses. Ads suck as well.” Instead, people look to recommendations from their friends. Companies are trying to join the conversation … but ads are like a business owner interrupting us at dinner, said Dweck.

Socii, which has already raised two angel rounds, solves the problem by allowing businesses to give customers points, discounts and rewards for doing what they would do anyway — share their visits to those businesses via social media, said Dweck. His app is a dedicated platform for companies to connect with customers — a quiet place away from the noise, he said. It generates word-of-mouth content for businesses and is a fun experience for consumers, he asserted. The business model is free to restaurants until they build a following. “It’s very affordable for restaurants to generate tons of content online” using the app, explained Dweck, and it drives lots of in-store visits to collect rewards.