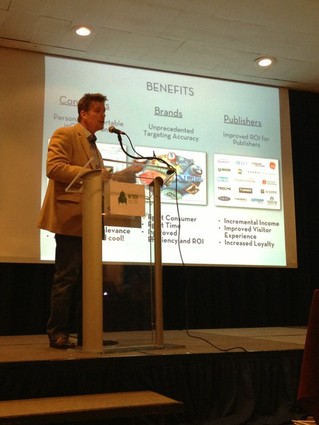 At the February 21, 2013, NJ Tech Meetup, attendees had an opportunity to speed network, “ask” for help with their projects and listen to pitches from three N.J.-based startups in phone-based social networking, 3-D printing and consumer-centric advertising.

As always, the event took place on the Stevens Institute of Technology (Hoboken)  campus, in a room with a stunning view of New York.

The main speaker was Ari Meisel of Lessdoing.com, an efficiency expert who espouses “achievement architecture.” NJTechWeekly.com discussed Meisel’s talk and other happenings at the meetup in greater detail here.

The first speaker to pitch, Joel Schwartz, founder and CEO of Parlor (Lakewood), explained that his startup connects two people who want to talk on the phone about the same topic at the same time.

It is a conversation, Schwartz believes, that users will want to have via the phone with a stranger who shares their interests. They can have that conversation over Parlor’s carrier-grade network, which will be easy to scale if Parlor goes viral. If users don’t like the person Parlor randomly connects them to, they can press the hash (#) key and move on to another who shares those same interests.

Once users are connected, they are able to message their new friends, initiate another conversation or report others if the conversation goes bad. Parlor took home the audience choice award at the meetup.

Next up were Jonathan and Jimmy Placa and Orie Steele of Morristown-based ProtoExchange, a company in the very hot but little-understood area of 3-D printing — printing that converts digital files to real-world objects.

ProtoExchange creates a decentralized manufacturing network by combining crowdsourcing and 3-D printing technologies. Owners of 3-D printers — hackerspaces, for example— will have the opportunity to be paid to print products for consumers.

According to the company’s founders, 3-D printing does not currently have an economical prototype-printing model to take advantage of the technology. Manufacturers now use 3-D printers in much the same way they use other older manufacturing technology. The printers are installed in manufacturing plants that have large inventories of materials and long lead times to create prototypes.

These traditional methods take “much longer than our decentralized network exchange will [to complete a job], the founders said. “ProtoExchange overcomes the problems in the 3-D networking industry by acting as a clearinghouse” for “networks of modelers, printers and consumers.”

Next up, Don Nelson, CEO and cofounder of inControl Ads (a product of Atlas Owens, in Morristown), said he has a solution to the problem consumers and brands face with online advertising: consumers see too many ads and are frustrated. This results in “thousands of brands wasting billions of dollars on ad systems that are becoming more complex and more expensive,” so they can serve up ads people will want to see, he noted.

Nelson said his product, based on a pending patent, is an alternate to that route, “revolutionizing relevance in advertising by empowering, engaging and rewarding consumers, putting them in the driver’s seat to control the advertising they are served.”

InControl Ads takes individual preferences and matches them to relevant ads in real time and across various devices. It also solves a problem looming throughout the online advertising industry: regulation of consumer tracking. Using inControl Ads, consumers can opt into an ad experience via a personal preference dashboard.