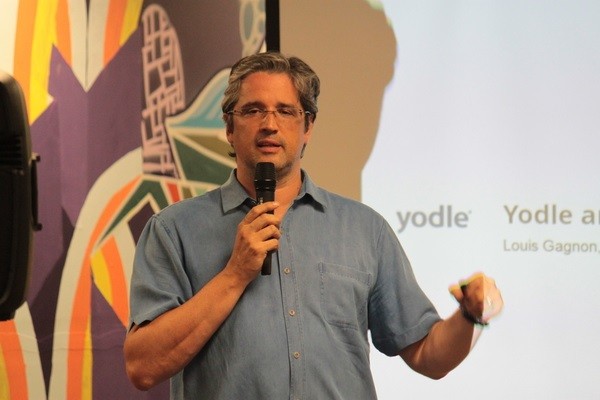 An enthusiastic crowd turned out for the NJ Entrepreneurs and Technology Startups (NJETS) Meetup on June 27, 2013. The event was hosted by JuiceTank (Somerset), the coworking/incubation facility.

The diverse group included investors, developers and professional service providers, who were collectively outnumbered by a highly engaged group of proactively networking entrepreneurs.

One such entrepreneur, Scott Barnett, is based at the coworking space Cowerks (Asbury Park). Barnett introduced his latest venture, Bizyhood, and announced the launch of its MVP (minimum viable product) beta version on June 30, 2013.

Bizyhood lets a community’s businesses create a social dialogue with their customers as opposed to providing the one-way reviews seen on most rating sites. Users can search for and identify local businesses based on opinions from their own social networks, from locals and from others who review and comment on those businesses.

Barnett asked the meetup attendees to sign up as individual reviewers or businesses and test the site. The go-live date is in July 2013.

Formal presentations then began, kicked off by Vidar Brekke, CEO of Atlantic Highlands-based Meddle. Meddle provides busy professionals without the time or perhaps the ability to blog a way to comment on articles, promote expertise and build a name for themselves across social media platforms. “It combines the poignancy of Twitter with the depth of a blog,” said Brekke.

Brekke built his introduction on a concept that originated in academia — publish or perish — stating that it’s more important today than at any time in the past to have an active presence in content media. Meddle lets users mark up material found in an online article or on a Web page, aggregate all their insights and create a portfolio. Content links from the portfolio can then be pushed out to Twitter, Facebook or LinkedIn. More information can be found at http://get.meddle.it/.

Mark Nelson, COO of Revelstone, followed with an insightful presentation on how the Parsippany-based startup makes it possible for cash-strapped local governments to better understand how they are performing, how they can improve and what they can learn from peers by using the company’s Web-based performance analytics and benchmarking platform. Revelstone is optimistic about the impact the imposition of tax caps will have on local governments, believing they will be well served, as they can no longer simply go to the well and raise taxes to cover costs and expenses. Local governments are now forced to do more with less.

Nelson considers Revelstone to be the Google Analytics of small government. It offers simple, easy-to-use analytic tools; creates content and key metrics specific to each department and agency; and allows benchmarking against other towns based on user-input demographic data, he noted. The company has expanded its reach to include clients in nine states. Revelstone has an eye on growing new vertical offerings where stakeholders may have a noncompetitive interest in comparative data, such as K-12 school districts.

The keynote speaker for the evening was New York-based Yodle’s chief product and marketing officer, Louis Gagnon [who is a Montclair resident and proud of it.] Gagnon addressed the challenges of helping a highly fragmented business sector — hyperlocalized businesses — achieve a measurable return on investment (ROI) on its limited marketing spend.

The presentation captured both the difficulty and the opportunity resident in the mission of aiding seven million small and medium businesses (SMBs) — offering thousands of services across 18,000 U.S. markets — that are trying to connect with 250 million online consumers.

Yodle intends to serve clients by bringing organization and understanding to the complex and the chaotic. SMBs have little or no capacity for tackling the learning curve for today’s maze of marketing approaches, measurements and pricing schemes.

Gagnon mentioned that the average small-business owner receives 37 calls per month from online marketing services. With a limited or no understanding of the jargon, owners are expected to make decisions. Even when marketing program success is realized, the associated benchmarks serve to confuse business owners and possibly erode their investment.

One such example Gagnon provided was of a marketing program that had resulted in an increase of 700 hits to a local website. Though the program met its objective, it didn’t capture a new client and was of no measurable value to the business owner. The result was a retreat and a default to a known quantity: ineffective local Yellow Pages and print advertising.

Yodle takes a four-step approach to addressing the challenge: it identifies local consumer intent across sites and platforms, tests what delivers the greatest ROI, invests in and scales what works and then removes the complexity for the SMB. The SMB then establishes a workable budget. It receives calls and emails, which are tracked on a simple dashboard. The process is the culmination of the three pillars of excellence in acquisition marketing: sales, service and results.

Gagnon closed by citing the acronym CLoMoSo, which stands for CLoud, MObile and SOcial media — the forces he said will disrupt the way localized SMBs measure their ROI, invest in marketing and track the cost of customer acquisition.

[Editor’s note: Several attendees called the Gagnon’s presentation heartwarming as he spoke about work/life balance as well as loving what you do so you can speak about it passionately. The NJETS Meetup discussion board has more.]