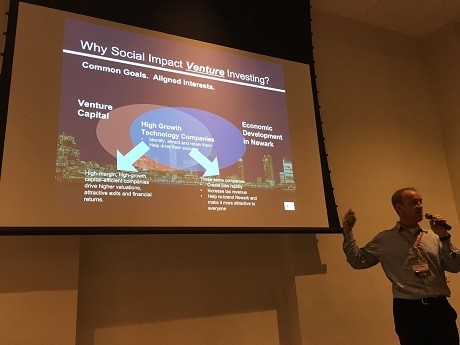 During a presentation about Newark Venture Partners (NVP) at the Morris Tech Meetup on Oct. 14, Tom Wisniewski put his “NVP hat down” and gave advice to the entrepreneurs in the audience. He noted that he loved entrepreneurs and had taught classes at General Assembly and elsewhere.

Wisniewski, NVP’s founder and managing director, said that his company couldn’t possibly fund all the entrepreneurs out there, so startup founders have to learn to become good at fundraising. Ironically, his first piece of advice was to avoid fundraising at all.

Avoid fundraising. “It sucks,” he told the group. The story that entrepreneurs often hear about someone writing down an idea on the back of a napkin, taking it to a venture capitalist (VC), and getting funding, is a myth. Fundraising takes a long time, it’s gut-wrenching, it’s brain-damaging, and it sucks the life out of you, he said. “If there is anything you can do to bootstrap a little longer, you really should.”

Also, it’s not just about avoiding fundraising because it’s painful. As an entrepreneur, the further along you are when you begin to fundraise, and the more advanced your company is, the easier fundraising can be. Ask yourself, “How will I look in a month or two?” Sticking it out until the company looks better financially could work in your favor, according to Wisniewski.

Find investors that fit. This is a really important concept, he told the group. You can spend a lot of time talking to a lot of investors who would never invest in what you’ve got. You have to understand that “people invest in things they know, understand and have experience with. So if I’ve never invested in a B2B SaaS [Software-as-a-Service]company, the likelihood that you are going to be the first one I’m investing in is going to be really low.”

He noted that he receives pitch decks from people interested in everything from real estate to oil wells, and has found “ some of these things interesting” from a personal point of view, but he has little interest in investing in them.

You have to find investors that are a fit for what you are doing, said Wisniewski, who added that he asks entrepreneurs to consider what their ideal investor would look like: perhaps someone who has run a startup, has done some angel investing, or who knows your industry or your way of approaching a problem.

“You probably won’t find that person that is the perfect investor that has all that understanding of what you are doing, but if you have a couple of those things, that’s where you should look.” You need to look for someone “who is going to get it.” Even if you can convince some other people, it’s the people who come close to having these capabilities who will be your startup’s lead investors because they’ll get in earlier and  bring in other people with them.

Avoid pitches.  “This is kind of crazy, right?” he asked the group. “Isn’t the whole essence of fundraising that you are out trying to pitch people and convince them to give you money?” However, “when you think about pitching, it’s really kind of awkward. It’s like the used car salesmen. Someone leaning in and trying to sell you something.” The natural human reaction is to sort of back off, so the hard pitch really isn’t a good way to get to know someone.

One of the easy ways to get to know people and build your network is not to ask for anything, but to try to help them out, he said. This enables you to develop rapport with the VC or angel.

Also do the simple things. There is a reason people talk about sports before they talk about business. These simple human things that bridge the gap between you and your potential investor really do help. Also, show people who you really are, he advised.  Don’t say, “I’m smart.” Instead, you should talk smart and act smart. Don’t say you are well-organized. Have a well-organized presentation.

Become a student.  “Ten years ago, I was at a presentation where the VC was talking about a person who said that they were a student of sales. They came from a sales background, they learned to adapt it to the startup world. … It was very elementary, in a way, but it was really the right concept.”

Wisniewski noted that “most people don’t come to pitch in a natural way. It’s not in most people’s DNA, but it’s something you can learn.” We all have some ability, he explained, but in order to get good at making pitches, there is a certain amount of studying and a certain amount of going out and doing it. Every time you sit in and watch someone present, you should be thinking about what they did well and if you could do that. For instance, you should ask yourself, “Why did they order their slides in the way that they did?”

It’s this notion of being a student, of thinking about things and reflecting on them and learning from them, that’s important, he said.