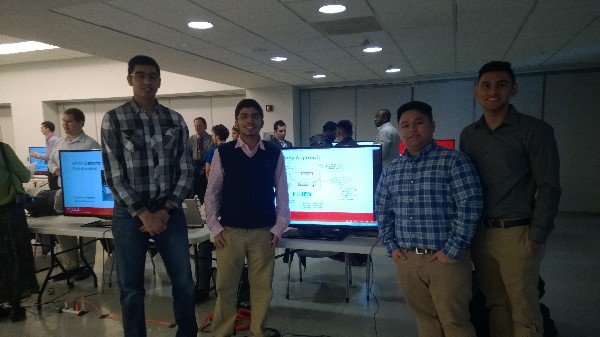 A glaucoma detection device, a potential way to heal nerve damage, and a smartphone-activated safe were just some of the projects presented at NJIT‘s third annual Innovation Day on March 25. The event, designed to showcase innovative undergraduate student research, took place at NJIT’s campus in Newark.

Over 40 projects were presented in a “poster session,” where slideshows detailing the students’ work played on computer monitors. Three of the projects were selected to win the day’s “TechQuest” contest, each receiving prize money and a $3,000 research stipend. This money was donated by sponsor James Stevenson, a former researcher and corporate fellow at Honeywell (Morristown).

The first place TechQuest winner was an at-home glaucoma detection device that measures the fluid pressure in a person’s eye. This data is recorded and can be transferred via USB to be interpreted by an optometrist.

Sanfilippo said he has been working on the device for about a year. He is assisting NJIT professor Dr. Gordon Thomas, who started working on the project roughly 10 years ago. Sanfilippo’s role involves getting the device to work properly and ensuring that it measures the correct part of the eye.

Second place in the TechQuest contest went to Sahitya Allam, a freshman biomedical engineering student. Allam’s winning project was a proposed method to grow nerves inside the human body, by growing the nerve cells on a biodegradable “scaffold” made of polypyrrole. Allam said this method could potentially have a higher success rate than current treatments for nerve damage. She added that it could also help amputees by connecting their nervous system to a prosthetic limb.

Allam also presented a second project: a proposed method of reducing hyperactivity and improving coordination in ADHD patients. To test this method, Allam had people sit in a special chair that stimulated their inner ears. This induced a release of norepinephrine in their brains, resulting in “a sense of calm,” Allam explained.

Before and after the inner ear stimulation, test subjects were asked to write “hello” 30 times on a digitizing tablet. Modeling was then performed using MATLAB to determine whether the subject’s coordination improved. Allam said she hasn’t formally analyzed the data or been able to test any subjects with ADHD yet. However, preliminary results look promising for test subjects without ADHD.

The third-place winner in the TechQuest contest was a portable device to help doctors sterilize their stethoscopes. A team of biomedical engineering students created the device, which attaches to the end of a stethoscope and sterilizes it using ultraviolet light. The team, comprised of Megan Dellavalle, Michael Gendy, Cristian Marcel, and Maryam Haque, designed the device to reduce infections acquired during medical treatment.

But medical technologies weren’t the only ones presented. Students Umar Rao, Aditya Rawal, Einreb Funda, and Nahian Basith demonstrated a prototype of Tech Vault, their Arduino-controlled smart safe. This safe can be opened with a smartphone, either remotely or by touching a phone to the safe. It can also be unlocked when the user waves their hand in a specific pattern in front of an ultrasonic sensor.

The Tech Vault team developed their prototype in less than two months. They hope to eventually finalize the product design and use crowdfunding to help bring Tech Vault to market.

Another student named Dan Pevny presented his idea for an app called Burst. The app would search for content users can consume within a specified timeframe. For example, a user might specify that they want to spend 30 minutes watching guitar lessons online. Burst would then find a series of lesson videos that can be played within that 30 minute time span.

Pevny said he thought of this app because “I think one of the biggest problems we’re all facing right now is information overload. There’s just an abundance of content, and it can be a battle sometimes to make sense of all of it.”

Additional projects included a drowsy-driving detection system, a method of reseeding forests from the air, and a way to detect cancer using bioinformatics.

Students also had the opportunity to hear speeches from several professionals involved in research.

Fadi Deek, Provost and Senior Executive Vice President for NJIT’s department of information systems, noted the prominence of female students in the audience. “My observation this morning as I walk around the room is that there are more women participating than men,” he said. Deek added that this is important because only about a quarter of current STEM professionals are women.

The grant money will partly be used to help students with their research. Sheft encouraged students to submit applications to receive up to $3,000 of the grant money for help commercializing their projects.

The keynote speech was delivered by Edmund Bishop, associate director of analytical development for pharmaceutical company Celgene Corporation (Summit). Bishop’s presentation centered on the history of the pharmaceutical industry. He also reminded the audience that medical advancements and information technology are intertwined.

“All of these pieces have to be together,” for the pharmaceutical industry to work, Bishop said. “So it’s innovation not just in the manufacturing capability or in the drug discoveries phase, right? It’s also about information. The IT world is a big part of this as well.”

Previous: What Will Happen to NJ’s Bell Labs after Parent Company Alcatel-Lucent is Acquired by Nokia?
Next: Technology Earns High Marks in Opening Round of Online Testing