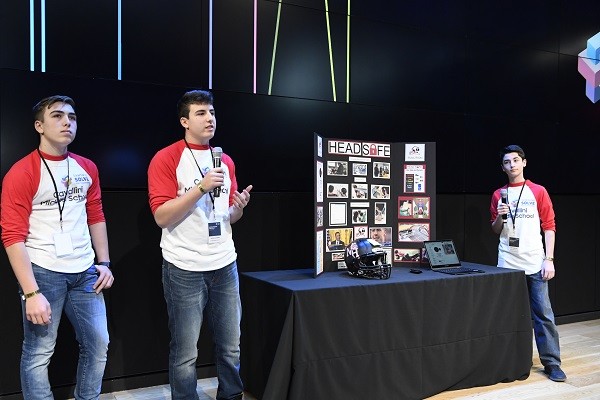 The students from Cavallini Middle School presenting for the judges.  | Courtesy Samsung

[While we take a much-needed break, we are rerunning our most popular posts. This was originally published in April 2018.]

Just as the students at Emil A. Cavallini Middle School, in Upper Saddle River, were beginning to consider what project to do for Samsung’s Solve for Tomorrow Contest, one of their friends suffered a concussion in a football game.

The rest is history.

Last week, the school learned that it was one of the three national winners of the contest.

Solve for Tomorrow encourages students to use their skills in science, technology, engineering, arts and math (STEAM) to solve real-world problems. For their project, the team of students at Cavallini Middle School built a sensor that can be placed inside a football helmet to detect concussions. They also built an app to work with the sensor.

The students and their project won $150,000 worth of Samsung products for their school.

Having emerged from thousands of public school entries from across the country to be selected as one of 255 state finalists (one of five in New Jersey), then selected as the winner for New Jersey, and then as one of 10 national finalists (from among all 50 states plus the District of Columbia), Cavallini Middle School ultimately advanced through all these phases of the contest to become a national winner.

As part of the Samsung competition, each team was asked to identify a problem affecting its community. “I want to reiterate our pride in these students being able to identify a project very close to their heats, a relevant issue that affects their community. They used a lot of creativity and ingenuity to apply STEAM to solve this issue,” said Ann Woo, senior director of corporate citizenship at Samsung Electronics America (Ridgefield Park).

The students used Bluetooth, open-source software and off-the-shelf materials to design their sensor-based project. Discussing the design issues they faced, student Joshua Chostaka said that fitting the sensor into the helmet was one of the easiest problems to solve. “We knew there were four main areas on the helmet where our sensor could possibly fit. Then we did some measurements and realized that all of those four could actually fit the sensor.”

Student Jacob Carlin noted that, after the design of the sensor was finished, the students made an app to work with it. “It was tough figuring out software that both looked nice when making a finished product and was capable of using Bluetooth to detect the sensor.”

The team used inputs from various sources in order to reach its goals. One of the students, Alex Fisherman, noted that they had received help from a number of community members, including a software engineer. Also, “One of our other teachers is a high school referee; our football coach is also a doctor.”

The teacher who supervised the project, Jonathan D. Harvey, said that the software engineer had partnered with him on several previous projects over the last two or three years, “and he was kind enough to come over and share his experience with coding and working with a whole bunch of devices for the internet of things, like Arduino boards and Raspberry Pi.” It was a great connection for the students.

“In the case of Cavallini Middle School, to use technology out there and use the combination of resources to create something impactful has been amazing to watch,” said Woo. “And that is why they are one of the national winners.”

Noting that the team came up with the idea after a friend had been injured, she added, “We were impressed with their passion and desire for change to happen in a positive way and impact their community.”

Chostaka said that he recalled hashing over some preliminary ideas with Harvey, but after their friend’s concussion, “we had to do a project that helps the community.” And designing something that would detect concussions would certainly benefit students in the community who play sports.

Harvey noted that they had talked about developing a protocol to help players suffering from a concussion to get back to their normal lives, but “we struck out there.” Then the students went backwards, in a sense, looking for ways to detect concussions earlier, he said. “We saw that it was a big problem that so many go undiagnosed. That’s when we started thinking about pressor sensors,” as well as other sensors that could actually detect concussions.

The Samsung Solve for Tomorrow Contest is now in its eighth year.

We found out how #COBOL programmers can help our state with its legacy systems.