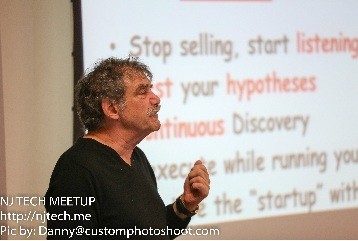 Bob Dorf, the guest speaker at NJ Tech Meetup 32 — held on the Stevens Institute of Technology campus (Hoboken) on January 10, 2013 — told the audience about the three special fleece sweaters he owns, each to commemorate his greatest investment failures.

Dorf said the sweaters have a logo on the front and back that reads, “I invested a million dollars in this company, and all I got was this lousy fleece.”

They give him the credibility to speak to aspiring entrepreneurs, he asserted. “You learn so much more from your failures, from the scars on your back.”

Dorf has learned enough to succeed in many other ventures, and now he’s trying to help other entrepreneurs do the same. He has co-authored The Startup Owner’s Manual with E.piphany (Mountain View, Calif.) founder Steve Blank, and he teaches business at Columbia University (New York).

The entrepreneur started his talk by asking audience members how many of them had ever written a business plan. Many raised their hands. Dorf then called business plans the “No. 1 enemy of startups.” He added, “No matter how good your business plan is, it’s never going to survive contact with the customers.”

Rather than spending time writing a complicated business plan that might wildly miss its mark, entrepreneurs should practice customer development, whereby they first talk to clients about their interests, then build a product to meet that demand, Dorf told the group.

“The fundamental principle of customer development is that you start to think about where the customers are going to come from,” Dorf said. “What are they going to pay you? Where are you going to find them? How much is it going to cost to get them?”

Dorf said customer development saves time and mitigates failure. He estimated that entrepreneurs might have to invest 20,000 hours in their startups — five years of 80-hour weeks. “Before I do that, I want to make sure I’m doing something that’s got a shot,” he said. “Take a thousand of those hours and work your way through the customer-development process to make sure that when you’re most of the way through that 20,000-hour commitment, you have a business with some revenue, some market and some growth potential.”

During the customer-development process, entrepreneurs need a minimum viable product — something quick, cheap and easy to build that they can use to obtain client opinions, Dorf said. For an IT company this might be a very basic website.

“You ought to be able to build your most viable product in the first few days,” he said. “It’s enough to give people a feel for what the product is like so they can talk about it in a real sense as opposed to a theoretical sense.”

Once entrepreneurs have their minimum viable product, they then have to be listeners. “You’re looking for genuine, honest, flowing feedback,” Dorf said. As they get that feedback, they can simultaneously calibrate their product to ensure it meets customer demand: “The product evolves in real time to minimize [the odds of your] finding out, after two months of building something, that no one really cares about it.”

Dorf pointed out that entrepreneurs who practice customer development will have an easier time talking to investors, because the latter won’t demand as much if they are giving money for a sure thing. “All of a sudden you’ve changed the dynamics of the investor conversation, and your share of the equity remains a lot higher,” he said.

A slideshow of Dorf’s presentation is available here.

Before Dorf spoke, NJ Tech Meetup founder Aaron Price announced three pieces of good news. The first: the meetup has a new sponsor, New York-based entrepreneur consulting firm ifridge. The second: the group was only 12 members away from reaching 2,500.[ The meetup has since surpassed that goal.] The third: Heal Hoboken, the nonprofit Price and other meetup leaders had founded to help Hoboken recover from Superstorm Sandy, was just $90 short of raising $32,000.

The second startup to pitch was Clifton-based LivinSport, a social network allowing athletes to post their sports résumés from Little League through high school and up to the college and professional levels. “LivinSport is about the growth of an athlete throughout his entire career,” cofounder Jason Webley said. The site is sort of a cross between LinkedIn and Facebook, whereby athletes can post videos and attract fans. Webley, a former Rutgers soccer player, said it could help high school athletes in particular to vie for college scholarships.

The winner of the pitch competition was New York-based Aggregift, which works like a Kickstarter fund for gifts. Users choose gifts for friends and ask others on social media to contribute to the cost. Those friends can contribute any amount, which remains hidden, and gain the satisfaction of having helped a friend receive a present. Cofounder Greg Schvey said businesses have been receptive to his idea because of the advertising potential. “This is the exact kind of marketing that retailers have been searching for,” he said.