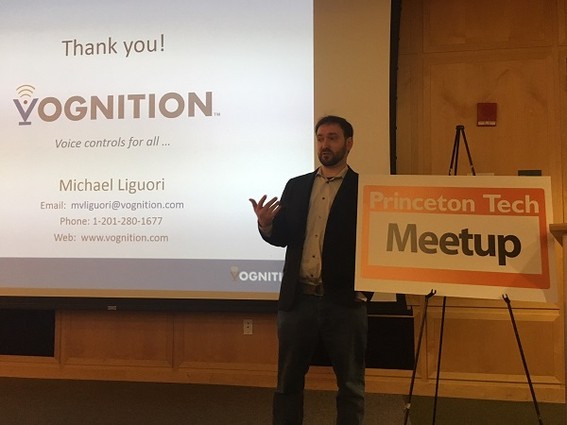 He also gave the audience some insights on what it’s like to be a founder and CEO of a tech company. Liguori has been a startup founder for eight years. Vognition was established first under the name “What are Minds For, Inc.,” which he admitted was a terrible name for a business.

A true technical founder, Liguori said that he “had to learn marketing and business, and learn to listen along the way.

“We are now in two different customers. One is Ingersoll Rand and the other is Robertshaw Climate. We are in over 100,000 homes providing voice controls. We have an issued patent,” he said, adding that this was a major accomplishment.

Vognition provides “virtual voice-control plumbing” to IoT manufacturers who want to capture the voice-driven market for homes and industrial spaces. “We make it easy for them to use and provide our technology by presenting SDK packages and other things. Under the hood, it’s really our patented technology and software tools delivered across a SaaS operating environment, with this voice-interface middleware that goes inside the client’s applications.”

Liguori said that he had talked to an analyst who asked him what the difference was between Google, Amazon and Vognition’s voice platform. The answer, he told the group, is that users “want to pick their preferred voice assistant and what device they want to talk to in order to personalize their lives.” Vognition lets them do that.

Every manufacturer and every device is different, Liguori said, so there isn’t a one-size-fits-all solution when selling to IoT manufacturers. Vognition understands how communications takes place with each individual device, so the company can handle devices of all types, whether Wi-Fi or Zigbee or anything else, he said.

Talking to the developers in the room, Liguori cautioned them about offering their services for particular clouds. “I recommend going to [cloud] vendors who are trying to specifically market to the IoT community, because they are going to wrap more bells and whistles around the specifics of trying to control actual IoT devices.”

He said that it can sometimes be the “kiss of death” if you choose the wrong provider. When you focus on specific providers, you are locking yourself in. If you choose an early-stage company, you are betting on that company to succeed. Working with different providers will provide different ecosystems.

There are some plusses to using an already-established IoT platform. As the major players in the industry build out their ecosystems, they are generally creating the de facto standards for the industry, Liguori noted.  The benefit of using a standardized platform is that it’s the fastest way to get your product out there without “reliving all the bugs these guys have crushed along the way.” So, there’s less maintenance.

Liguori touched on business models based on IoT. “You can choose to have a B2B approach or a B2C approach. … You have to be aware how the IoT product is getting into the market, and all the steps along the way. A lot of times, the product has to be made for less money because you are supporting the channel. Everybody, including the guy who installs the unit, will have their hand out and want extra money for putting in your particular thermostat or your particular light.”

When selling to manufacturers, you can charge a one-time price for integrating your services into their projects. Then there is the licensing fee, which can be a yearly annuity or based on the cost of goods sold, depending on whether the client has a recurring revenue model or not, he said.

The manufacturing cycle slows down sales and adoption, he pointed out. “Nothing happens quickly. However, once you are into a manufacturer’s product, it is too costly to spend money on something else for them to stop using you.”

Learn when a manufacturer’s new-product-development life cycle actually starts, he advised. “If you miss it, you may have to wait another nine months before you actually have an opportunity” to push your product through.

Also, beware of their timelines. “They may love your product and want to go with it, but there will be one thing they have to do first that may or may not support your doing business with them.” It doesn’t matter if there is a long wait or if there are doubts to be assuaged. “You have to be patient!” he told the group.

The Princeton Tech Meetup holds meetings each month, primarily at the Princeton Public Library. Organized by Venu Moola and Chris Boraski, the meetup now has more than 6,000 members, making it one of the largest tech meetup groups in New Jersey.  The next meeting will feature Derek Lidow, who will talk about his new book, “Building on Bedrock: What Sam Walton, Walt Disney, and Other Great Self-Made Entrepreneurs Can Teach Us About Building Valuable Companies.”

Previous: Chatham-based DriveWealth Raises $21 Million Series B Round
Next: Amazon Visits Newark: Inside Tuesday’s Tour of the City