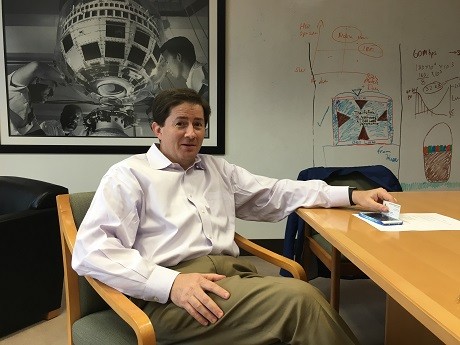 The process of combining Nokia with Bell Labs is still in its early stages, but Bell Labs President Marcus Weldon told NJTechWeekly.com that the two companies had worked out a structure that he believes will preserve the research integrity of the lab while providing a product-execution engine for Nokia.

This is good news for New Jersey, which will retain a vibrant, innovative, forward thinking research lab, he noted.

In an interview on April 28 at the Nokia Bell Labs First Shannon Conference on the Future of the Information Age, Weldon explained that he thought Nokia was initially skeptical as to whether Bell Labs had the “value that we were saying we did. They had a sense that, up until a few years ago, Bell Labs was beginning to fade.”

Nokia had noticed a recent rebound at Bell Labs, but also regarded that with some skepticism, said Weldon, as if wondering if it was just “us marketing ourselves” or if there was actually something good going on.

Nokia was also skeptical, he added, because it had its own research organization, the Nokia Research Center, that was once about the same size as Bell Labs worldwide: 1,300 people. But they had drastically reduced it to just 80 people. “Admittedly, they had sold the handset development business. But even before they sold it, they had only 80 researchers doing development. They had taken something akin to Bell Labs and reduced it to 80 people.”

Then Nokia executives came to Bell Labs, and Weldon showed them demonstrations similar to the ones shown to the public at the Shannon Centennial, as well as other, more sophisticated ones.

“They had no idea that so much innovation was going on here and how important it was. They even said that they were looking at acquiring some companies to get access to some technologies, but that we had more advanced versions of it.”

He said that Nokia liked the way Bell Labs organized its research — by looking at projects “from the future, back.” Researchers at Bell Labs typically look ten years ahead to see “how they would solve a problem if they weren’t constrained” by resources or money. Then they invent what they need for the future. “The last thought we have is how we can get there. Most companies just say, ‘How can I move forward from where I am.’”

He also mentioned John Kotter, a professor at Harvard Business School who, he said, believes that companies should have two operating entities, one for innovation and one for execution. According to Kotter, everyone in a startup is involved in all parts of the company. This works well for companies up to a certain size. “But when you get into large-scale deliveries, you have to create a thing that does those deliveries. The mistake is to keep the innovation team in that delivery part, because they will hate it. You need two operating systems, the delivery machine and the invention machine,” each operating independently, Weldon explained.

If both parts [of the company] receive enough funding to do it right, it will work, said Weldon, and Bell Labs in New Jersey and elsewhere around the world should have a very bright future. “By the way,” he added, “the clearest sign that it didn’t happen is that I will leave.”

See also: What Will Happen to NJ’s Bell Labs after Parent Company Alcatel-Lucent is Acquired by Nokia?