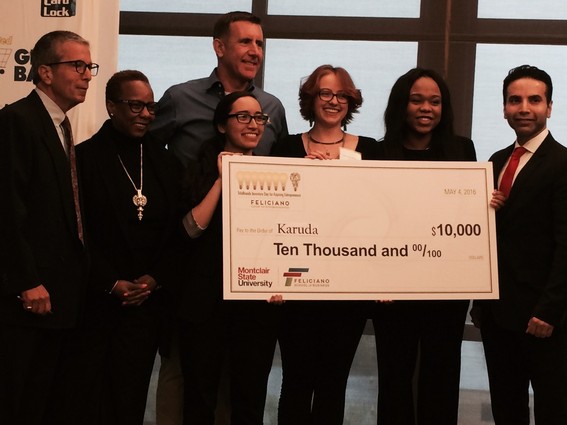 A pillow with a built-in alarm clock, an astrological online dating service and odor-blocking diapers were among the inventions that students at Montclair State University’s Feliciano Center for Entrepreneurship pitched at the TeleBrands Inventors Day for Aspiring Entrepreneurs, on May 4 at the at the school’s Conference Center, in University Hall. Sixteen teams participated in the competition, which awarded a first prize of $10,000 after the daylong “Shark Tank”-like event.

On that chilly afternoon, the crowd of young entrepreneurs and other attendees, dressed in business suits or jeans and tee shirts, milled freely about the room during a break, some striking up lively conversations about their money-making ideas while hip-hop music blared in the background. The crowd soon quieted down as the six finalist teams pitched their products to a panel of three judges in the final round.

The noise level in the room soared again when master of ceremonies and infomercial king Anthony “Sully” Sullivan elicited joyous shrieks from Montclair State students Larissa Elvers, Christina Himiob and Sacha Vincent after announcing that they had won the competition with their line of coconut-oil-infused skin-care products. The three budding entrepreneurs are marketing their product under the name “Karuda.”

Karuda’s founders plan to use some of the prize money to pay for the testing of their skin-care products at a Montclair laboratory. Testing is needed to ensure that the products support Karuda’s claim that they contain all-natural ingredients, a necessity if Karuda intends to arrange distribution deals with other companies.

The students focused on selling coconut oil skin-care products because of its popularity today. “We all use coconut oil for something,” said Himiob. “It’s a big fad right now, and we felt it was the right time to jump on it.”

Karuda’s products are touted for their antiwrinkle properties and the fact that they don’t contain any cancer-causing agents or allergens. The Karuda team, which thinks there is plenty room for its product in the $14 billion all-natural beauty industry, has priced the product at $9 per unit for wholesale and between $25 and $40 per unit for retail.

Karuda is currently manufacturing the skin-care products in a kitchen, but hopes to soon relocate to a larger facility as sales pick up.

Manish Israni, one of the judges and vice president of market research at Fairfield-based TeleBrands, the “As Seen on TV” products company and the event’s cosponsor, said that Karuda is “catching on to a trend that’s quickly growing.”

Israni said that he and the other judges — Andrew Gatto, principal at Andrew R. Gatto Consulting, and Marjorie Perry, president and CEO of Newark-based MZM Construction and Management Company — selected Karuda for the competition’s top spot because of increasing consumer demand for coconut-oil-based products, the company’s marketing of a finished product and its potential for gaining strong traction in the marketplace. He added that Karuda could someday sell its products on cable TV shows like “Home Shopping Network” and “QVC” or through TeleBrands.

The competition’s two runner-ups were team Layrd, a maker of a next-generation garbage bags, and team Wake’Em Up, which developed a pillow designed to make people less cranky in the morning or whenever they wake up.

Billed as the “garbage bag of the future” and taking second place in the competition, Layrd’s hand-made garbage bags represent a breakthrough in a product that hasn’t undergone any significant changes for more than 60 years, said team member Alexa Golieb.

The garbage bags are sold in sets of 10, and a full set is placed in a trash can, with the bags pulled off one by one until there are no more bags left, thereby reducing the time it takes to replace bags in trash cans. Layrd’s product is primarily targeted at businesses, schools and other organizations that tend to accumulate a lot of trash.

Third-place winner Wake‘Em Up’s pillow was created to make waking up a more pleasant experience. “Our goal is to make a more effective way of waking up in the morning,” said team member Bryan High.

The pillow has a built-in alarm clock, lights up and plays music, allowing users to choose any of these features that will make them more inclined to spring out of bed. The pillows cost around $40 to produce and are priced to sell at $120 retail.

The other teams in the final round included Park Along, an online service that offers a solution to the shortage of parking spaces; PhiloStand, a wine glass designed to avoid accidental spills; and Trash Talk, an antilittering device.

Park Along, which reserves and rents parking spaces in vacant business parking lots or residential driveways, is an example of how entrepreneurs are using digital technology to disrupt the status quo. Team  leader Eunice Choe said that the business was created because of a lack of parking spaces in many locations, especially in areas where major sporting events and concerts are held. Park Along provides access to parking spaces on an hourly, daily or monthly basis, and differentiates itself from similar online competitors because it steers clear of offering spaces in parking garages and lots in urban areas.

Citing Montclair State as an example of where there’s a need for its service, Choe said Park Along would ease the problem of finding parking near the school, which has more than 22,000 students and staff, but only 6,300 parking spaces.

Dennis Bone, inaugural director of Montclair State’s Feliciano Center for Entrepreneurship, praised all of the teams for their hard work and creativity in developing products and services that were pitched during the competition.

“What these students have done is that they have lived a real-life entrepreneurial experience,” he said.

Previous: Weldon Says Bell Labs Acquisition by Nokia is Good for the Labs and for New Jersey
Next: What is the 'portal,' and why is it in Newark?