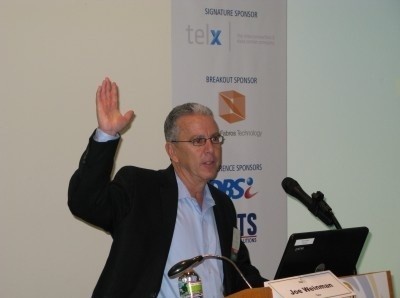 Two primary trends are driving the growth of the N.J. data center industry: the explosion of big data and the new popularity of the virtual desktop, said master of ceremonies Eric Shepcaro, CEO of Telx (New York), at the New Jersey Technology Council (NJTC) Data Center Summit on December 13, 2012.

The full-day conference, which took place in Livingston, attracted more than 150 NJTC  members and others interested in the data center market here.

Many companies headquartered outside N.J. own data centers here and participate in the N.J. market. Telx, for example, has two data center sites in N.J. and will be opening a third in Clifton this quarter.

Continuing with his overview, Shepcaro said that on the data side, the world’s information is doubling every two years. On the server side, more than 9 million are purchased annually worldwide. With the proliferation of phones and tablets, users are creating more data, and more data means more data that must be backed up, he noted.

In addition, “VDI [virtual desktop infrastructure], the virtual desktop, is finally taking off,” Shepcaro said. “We are seeing many, many enterprises put everything on the server to connect through virtual desktops,” he added.

The overall data center market has potential for rapid growth, Shepcaro predicted, adding, “I think we are in the early days of this market still … as enterprises continue to deploy diverse architectures.”

Customers are going to be looking for varied data center offerings with colocation, cloud and managed services and other services all under one roof, he said. “It’s not about replacing everything they have. We still tell folks to keep critical applications on their premises and offload the rest.”

Cloud services and software as a service (SaaS), which also spur data center growth, are predicted to be a market in excess of $100 billion this year, Shepcaro said.

Storage is a big driver. “We are seeing now that even small and midsize companies have terabytes of data they need to store, where large companies have petabytes or more of data,” noted Shepcaro. Even though solid-state and other types of new storage are taking off, the need for some kind of repository continues to grow, he said.

Networking is growing at a rapid pace, perhaps 30 percent per year, and data centers are where companies interconnect and perform networking tasks, he said.

Data centers are also able to lower energy consumption costs for enterprise users. They offer enhanced power for higher-density computing and optimize electrical and cooling resources. “This is possible through newer technologies we are seeing in the data center, whether it be new chips … coming out for processing or other technologies.”

“The other exciting thing I see taking off in 2013 is machine-to-machine communications,” Shepcaro predicted. All the devices and smart tags connected to the Internet or private networks have to come back to centralized repositories, he said. It all needs to be processed and analyzed and pushed out to a network for the business user or end user.

There is a lot of pent-up demand as well. Most processing power and data storage are still sitting somewhere under an enterprise’s roof, Shepcaro noted. “To build out or retrofit an existing data center will cost you somewhere in the neighborhood of $1,000 per square foot.” This is very costly from a capex (capital expenditure) perspective, if it can even be done, he said. “You also need to think about business continuity and disaster recovery,” he pointed out.

For the industry, differentiation among data centers is becoming more about latency and proximity, Shepcaro added. In the past, these buzzwords were used by high-frequency trading outfits only. However, whether media companies or enterprise financial services firms, businesses want to be close to their customers’ “eyeballs,” and they want to do it at the fastest speed possible: milliseconds and nanoseconds, he said.