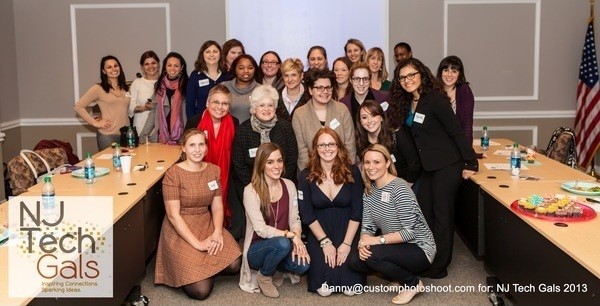 Don’t let the cupcakes fool you.

NJ Tech Gals (NJTG) launched on January 24, 2013, with a couple of dozen women gathered at the Hoboken Business Center for “Dinner, Cupcakes & Technology, Oh My!”

The founders’ stated mission: “to provide an ecosystem of support for ladies making big waves in the N.J. technosphere.”

In a video interview posted here, founders Christine Curatolo of Princeton, a product manager also developing an online marketplace for mothers, and Sarah Himmelbaum of Hoboken, creator of mommies247.com, said the group was needed because the tech meetups they often attend are male-dominated.

NJ Tech Meetup founder Aaron Price introduced the pair a few weeks ago, and they have been inseparable since. (Price showed up to toast the launch.)

Curatolo and Himmelbaum expected their first meetup to consist of five women at a table eating tapas. Within 12 days, 94 women had registered, and the group relocated from a restaurant to the business center.

The women at the gathering came from as far away as Point Pleasant and included entrepreneur Jenny Chou, who runs muchness.com, a sort of Kayak.com for flash sale websites, and fashion designer Tammy Duffy. Crossing the Hudson to show her support was Jennifer Shaw, a senior data analyst at comScore and founder of the year-old NYTech Women, which is 980-plus members strong.

Many in attendance also belong to NJ Tech Meetup, whose membership has grown to more than 2,600 since its inception at Trinity Restaurant, Bar and Lounge (Hoboken) in April 2010. The NYTG group drew from a broad range of skill sets.

Marisa Brown, a project manager with mobile technology firm Usablenet, said she had joined the male-dominated NJ Tech Meetup but has never attended a meeting. The all-woman setting of NJTG appeals to her as a less intimidating way to ease into the local tech scene.

A large project that NYTG has taken on is coordinating and directing the tech companies interested in supporting the proposed SparkLab in the city-owned building, currently unoccupied, in Hoboken’s Sinatra Park.

[NJTechWeekly.com covered the idea for the SparkLab here when Hoboken Mayor Dawn Zimmer announced it at the NJSpark Summit in Hoboken September 13, 2012. At that time she described the center as a technology community center, both an indoor and outdoor place, where entrepreneurs can work and where families can come for tech programming of interest to them.]

Laurie Petersen is a Hoboken-based reporter and editor who teaches, coaches and consults on digital media. Follow her @lauriepete