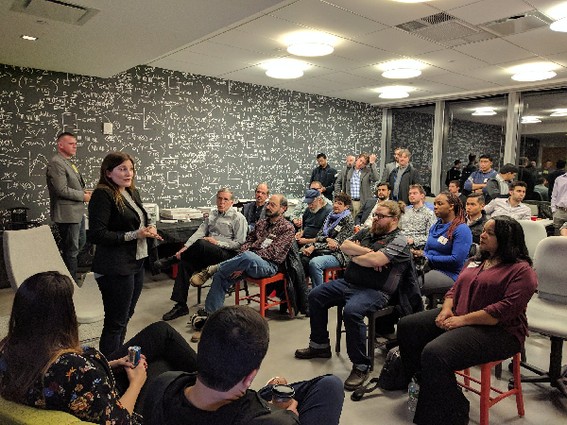 Computers made by MAINGEAR are high-speed and super-cooled, and they are assembled in New Jersey. All the components, such as the CPU and graphics cards, are high-performance. The cooling enables the overclocking of all devices, thereby increasing the processing speed and giving gamers a better experience and eSports gamers an advantage, according to Santos.

The company uses a custom coolant blend that was developed in-house, he noted. The coolant is noncorrosive, so it will not damage the motherboard if there is leakage. In addition, the coolant serves as an antifreeze. The components are custom-painted and visible through a see-through case; buyers have a choice of paint colors. Although the machine uses four fans for cooling, it is very quiet, Santos said. He added that the target market for this product is primarily gamers, but also other users — like the producers of the Superbowl 2014 half-time show — that need high-speed computing. [Clarifying later, Ron Reed, technical marketing director at MAINGEAR, explained that the company’s system powered the graphic display below Katy Perry during the show.]

InCharge manufactures branded cell-phone charging stations that are made of lightweight aluminum, so transportation and relocation are easier, said Gonzalez. The units are 3 inches wide and weigh 38 lbs. They also have a video monitor display and feature tool-less (i.e., simple) assembly. Solar power is an option, she noted. These devices are good for trade shows, music festivals, and other indoor or outdoor events. InCharge boasts a T-Mobile branded cell-phone charging station at the Seattle Space Needle. Gonzalez said, “These devices have a ‘water cooler’ effect,” and she noted that, while people are charging their devices, they tend to talk to each other and be social.

After describing their products, both participants answered Waibel’s questions.

Q. How did you become an entrepreneur?

Gonzalez: I was an ad designer and hated how obtrusive ads were. Ads are in the middle of what is being read, and that’s disturbing. I read that one should solve a problem with something you use every day. I use my cell phone every day.

Santos: I couldn’t find a job, so I decided to make my own company. I went to school to become a network engineer. I couldn’t find a job, so I decided to consult. But I found that no one would trust a young guy with their network. I always loved computers and car racing. I built computers for my friends. I decided I would either become a mechanic or a computer technician. I realized that I really like racing cars — not repairing them. Then, at Christmas, I bought a computer which arrived broken, and the distributor wouldn’t replace it. The phone technical support tried to have me fix it but; that didn’t help. I wound up building the machine myself. That’s when I realized, I can do this better. In December 2002 I started with establishing a D.B.A. (Doing Business As), a logo and other business fundamentals. I went to the CES Trade Show in Las Vegas. I networked, but my goal was to meet Leo Laporte, host of the TV show ‘The Screen Savers.” I wanted to offer him a free computer (as a promotion). Laporte did not want the computer, but asked me to give one away for free on his show, after which I started receiving lots of calls with orders.

Q. What are the advantages and disadvantages of being self-funded?

Gonzalez: Lots of people suggested to me to raise money by making a business plan. I just couldn’t do it. The thought of writing a 54-page report was too much. I gave up my apartment and moved back in with my dad. I held four jobs. I even took jobs in graphic design that I subcontracted out at $10 per hour. I was into my business all the time. I am happy that I did not have funding. When you are self-funded, you are very careful about how you spend your money. Mistakes are your own decisions. Growth is organic and slow. I paid more because I bought less volume. I was able to test the units out on a micro level, giving me the ability to make changes quickly and less expensively.

Santos: I made a lot of sacrifices hiring and firing friends. Having investors early on is stressful. It forces you to make decisions. I didn’t really know what I was doing. I had no plan. I was just doing what I love. I could make the right decisions and do what I wanted to do. I had to let go of a half-million-dollar order because I had no funding. You should worry about making your bank happy early on in the business. Then, when you need the money, they will lend it to you. I didn’t do that, and that was a mistake.

Q. How do you feel about partnerships?

Santos: I am selective of my partners. We deal with Amazon and Newegg, but not Best Buy. HP approached us and I thought, “Why should I partner with my competition?” My marketing director, Ron Reed, suggested that I rethink my position. I decided to work with HP if my brand was “called out.” Then the partnership made sense, after which other companies realized they could make a deal with me. One month later, Razer, a leading manufacturer of keyboards and mice, called to partner with me. Two months later, Coca-Cola called to partner with me for an e-Sports gaming PC. We partner as long as our brand is called out.

I haven’t had any bad partnerships because I am very selective of who I partner with.

Q. What are your predictions about the future of hardware?

Santos: My machine is the future of tech. PC gamers are the early adopters of future tech. It used to be that the future was in the speed of the machine. Virtual reality is now the future. VR is in phones, PlayStations, headsets and even the PC with Oculus. They are adding senses with gear, 4D and smell. VR is good for business because there will be a need for more (computing) power.

eSports [is also the future]. There are eSports teams. eSports players are getting paid $1 million per year. Nike and Coca-Cola are sponsoring eSports. eSports has become a huge spectator sport.

Santos: I was born in New Jersey. It’s less expensive than the city, but close enough to go to. Port Newark is right here and relatively quick [getting products through customs]. There are lots of smart people. It’s easy to find help. We design and manufacture in-house. We do all our support here in New Jersey.

Q: What is your management style?

Santos: [When hiring employees] the first question I ask is, “Are you a gamer?” If not, this conversation is over. … We have 30 employees. If we get overloaded with customers, then we raise our prices. That brings in customers that matter. If a customer is causing problems, costing more money than its worth, fire them! Then, they’ll call you begging for your product at an even higher price.

Gonzalez: Hire the right people with the right attitude. The biggest problem is attitude. Delegate as much as possible. Fire clients, definitely. If clients give you a headache, fire them!