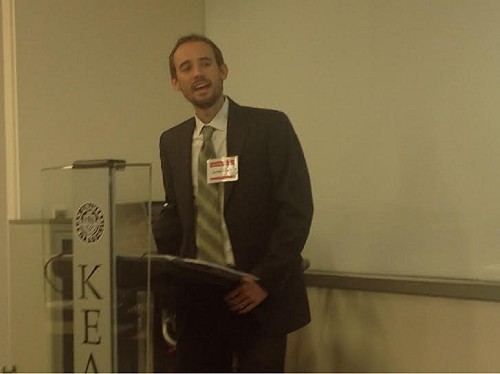 At the LaunchNJ Life Sciences meeting on Nov. 10 at Kean University, attendees from startup life-science companies were treated to talks on the pleasures and the pains of fundraising.

Discussing the pleasures was Don Newman, director of small business advocacy at the New Jersey Business Action Center , who reviewed many of the ways in which the State of New Jersey was working to help local companies raise capital.

The pains and pitfalls were left to Jarrod Rhen, a CPA with WithumSmith+Brown PC, a tax, accounting and auditing firm. Rhen walked the group through many of the hidden traps found in investor agreements, placed there to protect the investors at the expense of the inventors.

Newman spoke about New Jersey’s “four legs” of business development: Choose: New Jersey, a privately funded company promoting New Jersey as a place to locate a business; the New Jersey Economic Development Authority, which Newman referred to as “the bank for businesses”; the Department of Higher Education, which plans, coordinates and advises on state programs that promote business development; and his organization, the NJBAC, which serves as a “one-stop” shop for businesses of all sizes, supporting the global competitiveness of New Jersey companies.

The NJBAC also promotes the state’s attractiveness as a business-investment location, both nationally and internationally.

Newman started with two important messages: First, he said, only 2 percent of the world’s customers are in the U.S. This means that companies that are not exporting are missing out on a lot. Second, he couldn’t emphasize enough the importance of having a business plan. He added that if you put a business plan together and find out that the business is more than you want to take on, then that is a successful business plan.

Among the litany of programs mentioned by Newman were: assistance for small businesses in obtaining financing ranging anywhere from $500 to $5 million; assistance with the state government procurement process; grants to help companies expand into international trade, including funding for registration at foreign trade events; various tax credits for net operating losses; and angel investments.

He noted that the state operates an online business portal for those interested in these programs.

Newman emphasized that it is important to think ahead to you want to go, and to think about what programs you might want to use in the future, after your business is established. For example, the tax credit for net operating losses only applies if your company is subject to the corporate business tax, so you will need to incorporate as a C-Corp — rather than as an LLC or an S-Corp — to be able to take advantage of that program.

Companies really need to have someone on staff who understands finance, to keep them out of trouble due to the hidden surprises in contracts, Rhen said.

Rhen presented in broad strokes what an entrepreneur needs to look out for to protect the company’s residual value (the value left over after the investors take their shares). He did this by walking the audience through the pros and cons of straight debt, convertible debt (a loan that converts to equity), warrants (options to buy equity at later time), preferred stock, and common stock.

He warned that the devil is in the details, saying that clauses like cashless exercise provisions, under which an investor uses a share of his or her profits to buy more shares of a company, could mean that the shares the company just sold will produce no additional money.

He also explained how cumulative dividends work, which is similar to the way compound interest works, and how they protect the investor at the expense of the residual value. The investors’ value rises with time, but the company’s doesn’t.

Rhen emphasized that a startup’s ability to negotiate these provisions really depends on just how badly it needs the money. The greater the need, the less residual value the startup will likely be able to hold out for.

However, he encouraged even desperate companies to know what they are getting into, so that they aren’t surprised. And he offered to help entrepreneurs review and understand a term sheet, even if it meant sitting down with them over a beer to discuss it!