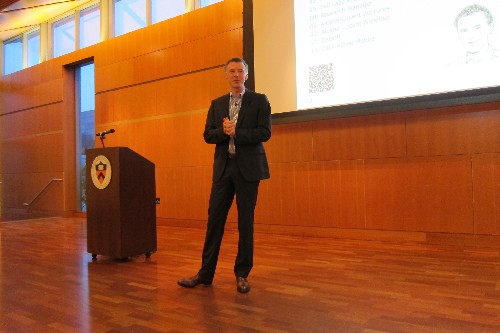 Eager audience members received entrepreneurial advice and insight into the television, mobile phone, and social media industries during a presentation at Princeton University on Nov. 6.

The event, “Entrepreneurship and the Interplay of TV, Mobile, and Social,” centered on a slide presentation and  a relaxed, open dialogue with technological innovator and business leader Wim Sweldens.

In addition to his many other accomplishments, Sweldens was the president of Alcatel-Lucent‘s Wireless Division, and is currently an Entrepreneur in Residence at Columbia Business School.

During the event, Sweldens detailed his experience as cofounder of Kiswe Mobile, a startup based in Murray Hill, N.J., and Bethesda, Md. Kiswe Mobile creates interactive mobile apps to let sports fans view games from various angles, according to their preferences.

Sweldens began his presentation by asking the audience of Princeton students and other community members what they wanted to hear about. Some audience members had questions about the television and mobile phone industries.

He addressed these topics in his talk, pointing out that the experience of watching television has remained mostly the same since its early days. Conversely, smartphones and social media platforms provide a more customized, interactive experience, thanks to new technology. For this reason, the television industry has little in common with the mobile and social media sectors.

However, Sweldens noted that unlike the similarly old-fashioned print industry, television networks continue to see their advertising revenues grow. Since most live sports are viewed on television, Sweldens and his partners saw an opening for their business in the mobile entertainment market.

Sweldens drew upon his experience with Kiswe Mobile to address another topic audience members wanted to learn about—entrepreneurship. He gave the crowd step-by-step instructions for beginning a company, using examples from his own startup.

According to Sweldens, the first thing startup entrepreneurs need to do is build the right team, as that’s the most challenging part. “There is nothing harder than building an entrepreneurial team that works together, works as a team, executes as a team, and drives results,” Sweldens told the audience. For Kiswe Mobile, the first team member Sweldens partnered with was Jeong Kim, former president of Bell Labs.

When asked what qualities entrepreneurs should look for in team members, Sweldens said to look for “people who really complement you in more ways than one. Not just in the traditional academic skill set, but also in personality.” He commented that he and his business partner have almost diametrically different personalities.

“Diversity is the essence in my mind,” Sweldens said. “If you find somebody just like yourself you haven’t really added a lot of value. And then find somebody that you’re very comfortable working with, because you’re going to be spending more time with them than you’re going to spend with your family, or your loved one, or your spouse, or your significant other.”

Sweldens said the next step in the startup process is picking a rough general direction for the company to go in. For their startup, Sweldens and Kim decided to pursue the interplay between the television, mobile and social media industries, as they saw these as fascinating businesses with a convergence opportunity. They also wanted to focus on live events, given that companies like Netflix had already found success working with prerecorded television programs.

Once that was decided, sports seemed like the logical area of focus, as it’s the largest business in live television. This led Sweldens and Kim to approach Jimmy Lynn, an experienced strategist in the sports and entertainment fields.

According to Sweldens, the next step in choosing a business direction is identifying a specific problem to solve. This should be based on interviews with prospective customers, he said, because there are “only a small number of problems” that can be solved with lucrative business ideas, and entrepreneurs cannot identify these problems on their own. Sweldens also advised that entrepreneurs focus only on problems they have the skills to solve. “Find a problem that fits your skills, and then the ideas will come,” he said.

When Sweldens interviewed prospective customers, he found that they typically regarded viewing sports on a small mobile phone screen as less entertaining than watching on a much larger television. This gave Sweldens and his team a specific problem to address: how to make mobile viewing different—and in some ways, better—than watching sports on television. After all, “if your small screen is going to always compete with the big screen, it’s always going to lose,” he said.

That’s why Kiswe Mobile’s apps help sports fans decide what camera angles to watch games from, when to view replays, and when to view player statistics. Sweldens said that he saw his company moving toward “completely social, personalized, individualized, interactive live sports on your device.”

However, he advised audience members not to form specific plans about the distant future for their own startups. “You need to know what you’re going to do next week, maybe next month, maybe the next three months. What you don’t need is a five-year plan. Because your five-year plan is wrong the moment you start writing it.”

Sweldens also said that his simple philosophy is that entrepreneurs should “never give up, because if you refuse to give up, then the only possible outcome is success.” He added that, while this may sound a bit trite, passion and perseverance are what separate successful entrepreneurs from the others.

After his presentation, Sweldens welcomed more questions from the audience, whom he also invited to speak with him personally over drinks and hors d’oeuvres afterward.

The event was organized by the university’s Keller Center as part of the Creative Mind & Leadership: Innovation, Design, & Entrepreneurship Lecture Series.

Previous: Opinion: Spread the Word about Google’s Solve for X in New Jersey and Apply by Dec. 1
Next: Yin and Yang of Fundraising Explored at LaunchNJ Life Sciences Meeting