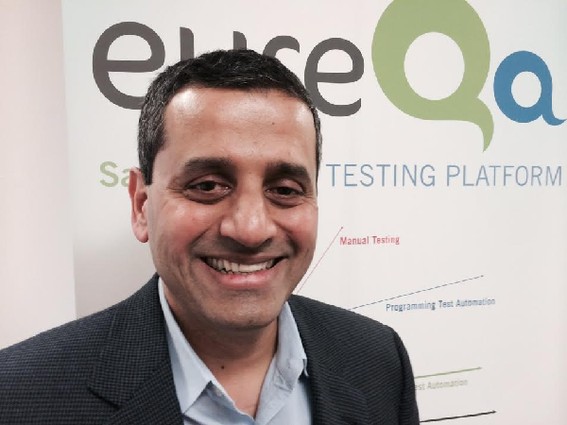 The company’s flagship product, the eureQa Testing Platform, helps build tests without programming and runs these tests on hundreds of combinations of Web-based browsers, operating systems and devices on the cloud.

Since 2014, the young company, a subsidiary of Tripod Technologies (Cherry Hill), has been selling its automated software-testing product to various firms involved in e-commerce, as well as to independent software vendors (ISVs).

With the explosive growth of the $1.6 trillion global e-commerce business, it’s critical that software testing be accurately and consistently done across all browsers and devices, to ensure a positive user experience on e-commerce sites. Otherwise, the odds are high that the sites will not work properly, resulting in frustrated and angry customers and lost revenue for companies.

Automated software testing is considered to be more efficient, less costly and substantially more accurate than manual software testing. Moreover, until recently many of the software-testing tools on the market required programming skills. This meant that companies had to pay high licensing fees for the testing software; and to build and run the tests, they had to hire programmers, many of whom didn’t understand how the applications or sites worked.

That isn’t the case with the eureQa Testing Platform. Those who have a thorough understanding of e-commerce sites don’t need programmers to use it.

The platform provides similar benefits to the ISV market. Because ISVs are making changes to software on a daily basis, the software has to be tested daily as well. And with the large volumes of software testing being done in a very short span of time, ISVs are ideal candidates for automated testing.

Demand for software-testing tools like the eureQa platform has grown significantly in recent years, as the adoption of test automation in the $37 billion worldwide software-testing market has increased.

Any employees yet? The company has 68 employees, with 60 at the company’s facility in Hyderabad, India.

Funding: The company secured $600,000 in seed funding from Philadelphia-based Gabriel Investments in December 2015. Sashi Reddi, an investment partner at Gabriel and founder of AppLabs (Philadelphia, Pa.), joined eureQa’s board.

Markets you are serving: E-commerce and ISVs.

In the mid-1990s, I was working at a Baltimore software company when I accepted a job offer at Bluestone Software, a successful South Jersey company. That’s where I met Bari. After we left Bluestone, we started Tripod, an outsourced software-development-product company, in 2002. I live in Voorhees and Bari lives in New Brunswick. For the foreseeable future, we both plan to continue living in New Jersey.

Following the global financial crisis in 2008, most startups funded by venture capital firms were told that their software development had to be done in the most efficient way. They were told to look for an offshore provider or a low-cost center to do the testing. But the problem is that today there are no more “new” low-cost centers around the world. So the only way to reduce your costs is through automation. U.S. companies that are using automation for software testing are going to be able to compete better than companies in traditionally low-cost centers like India, Vietnam and other places where a lot of manual testing is being done. These centers have relied on large pools of inexpensive manpower to do the testing — manpower that is not so low-cost anymore. We are providing a path to increased productivity by enabling automation to reduce costs. In addition, we are providing a way for manual testers to migrate to automation, giving them the skills they’ll need to test software in the most cost-efficient way possible.

3.     Why can you address the problem better than anyone else?

Our approach focuses on having the people who best understand the software being tested to build the automation. These are the subject-matter experts, business analysts and others who understand how a user will handle the software and how to best simulate the user experience. They can also ensure that the most accurate and realistic tests are conducted.

Furthermore, these tests are easily run at a click of the button on the cloud, thus reducing a company’s capital expenditure and making the move to automation a great experience. Our testing software has the quickest payback, and we have seen much evidence of this, compared with other tools and approaches.

We were looking at all sorts of variations of a name in order to show that we were coming up with a novel approach to solving a problem. We tried various combinations of names, using such words as “test” and “quality,” but did not like any of them. Then one day, while I was driving on the New Jersey Turnpike, I had my eureka moment and realized that that would be a great name for the company. We then decided to change the letter “k” to a “q” so that the name ended in “Qa,” which would stand for quality assurance.

5.     What was the biggest mistake you made in your entrepreneurial journey and what did you learn from it?

I’m sure that I’ve made many mistakes, like every entrepreneur. But I think one of the things that really stuck with me was putting people in positions that were not the right fit for them, and then leaving them there longer than I should have. Sometimes the problem is solved when it’s just a question changing their role a little bit or putting them in an area where they are most comfortable. But there are times when it becomes very clear that they are not a good fit for the position. In some cases, like with developers, it is easier to determine fit because you quickly realize if they can or cannot do the work. In other areas, it’s a little more difficult because there are other factors at play. So you have to separate those external factors from the individual’s abilities when deciding if he or she fits a particular role. Right now, we are spending more time assessing a person’s fit for a position before committing to putting them in that particular role. This allows us to have more of an extended evaluation, so we can see whether they are a good fit.

6.     When was the last time you thought about quitting your startup and going back to corporate life, or doing something else? What got you to stay?

We’ve been at this for so long, I don’t think going back to something else is what we want to do. But we did have some serious questions about the business after the global financial meltdown in 2008, when we lost a few large customers.

At that time, there was the question of what we should do. Both my partner and I sat down and talked seriously about the business. We decided that we had put so much time into the business that we should give it more time. We knew it was going to be a difficult six months to a year, but we spent the time, went through it and survived.

When things picked up, we had a few large customers again, and then we realized that this was the nature of our business. That’s why we moved to building a product to a point where we now have a lot more customers, all pretty much evenly spread, so you don’t have things tied to one or two customers. It’s not an 80/20 situation, where you have 80 percent of your business coming from 20 percent of your customers.

I belong to a couple of organizations. One is called “The Indus Entrepreneur” (TIE), an organization with over 60 chapters worldwide. It’s a great place for meeting entrepreneurs. There are local networks as well. I am part of a group called “Technology Leaders of the Delaware Valley,” which is a great group of entrepreneurs and technology company founders. Organizations like the New Jersey Technology Council and the Philadelphia Alliance for Capital and Technologies (PACT) are also great places to network with peers.

9.     What does your family think of you being an entrepreneur?

They are very supportive. My wife is extremely supportive. I wouldn’t be able to do this without her being part of it. As for my kids, who are 12 and 14 years old, my being an entrepreneur is the only thing that they have known from the time they were born.

I think it’s significant to have the right team of people, support from a great partner, and mentors and advisors whom I can call on to ask questions or to bounce ideas off of them.