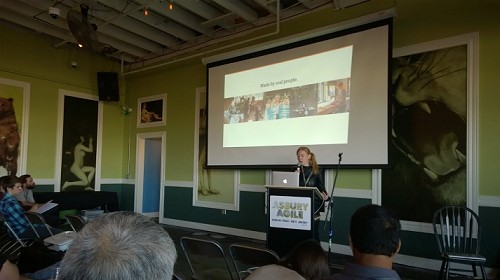 Change is inevitable, and making change work in a way that will spur teamwork and innovation, rather than generate barriers, is always an issue.

The strategies the company uses revolve around open communication and teamwork. “I’m really passionate about collaboration,” Mounter told NJTechWeeky.com.  Collaboration is often vital to embracing change, which Mounter said is “a big factor that builds a healthy working environment.”

Some highlights of Mounter’s advice are presented below.

In many companies all of the planning and decision making happens at the beginning of a project. However, Mounter said, this doesn’t allow workers to adapt and change. Conversely, she said iteration “allows you to do short sprints, test what you think you’re doing right,” and adapt if something goes wrong.

Mounter told the audience that “sharing often is really important.”  Staff members working on related projects should know what colleagues are doing, as it may be something that will affect them. That’s why she and other Etsy workers use “Basecamp,” a project management app, to share feedback and designs. “Getting feedback and collaborating with other people often allows you to get to better solutions faster,” Mounter said.

3. Talk to People in Person

Although this is a “really obvious point,” Mounter said, “it’s amazing how much people forget to do this.” She pointed out that it’s usually faster to resolve conflicts and reach decisions with face-to-face communication.

“Segregation is the enemy of collaboration,” Mounter told the crowd. She explained that Etsy employees with different professions work alongside each other. For example, an engineer may sit right next to a designer, allowing them to ask questions and get feedback from each other. Mounter said that collaboration “should happen naturally as part of the day,” not just in scheduled meetings.

Comfort and security can be major factors that contribute to a productive workplace. “When people feel afraid to make a change,” Mounter said, things will only stay the same.

She told a story about a coworker who started at Etsy and was becoming the manager of a large team for the first time. The coworker was afraid of missing his old job and being a bad manager, but his superior assured him that everything would be okay, even if he didn’t enjoy the new position right away. The superior simply said that, if things weren’t going well, they could talk about the situation to find a solution.

Mounter also suggested doing “blameless postmortems,” when projects go wrong. In a blameless postmortem, the staff evaluates what went wrong without pointing fingers. “If people feel like they’re going to get in trouble, they’re going to be less honest about what happened,” Mounter said. She later added that “If you’re afraid to be able to talk about that stuff, then you won’t learn from it.”

Mounter said Etsy runs weekly “show and tell” sessions where employees discuss their projects and get feedback from their coworkers. They invite people to speak up with any questions or concerns, allowing for open, honest communication.

The company also runs an “Etsy School” a couple of times a year where staff members volunteer to run classes, helping everybody learn more about each other’s roles. At Etsy, Mounter said, “We really encourage skill sharing and continued learning.”

Mounter said Etsy’s team leaders routinely check in to make sure their staff members are responding well to changes. For example, they may offer to help with any problems and ask whether a deadline can be met without overwhelming their team members.

Practices like these have helped Etsy grow into a successful business with over 600 employees. “If you embrace change, it helps build a healthy workplace, and vice versa,” Mounter told the audience.