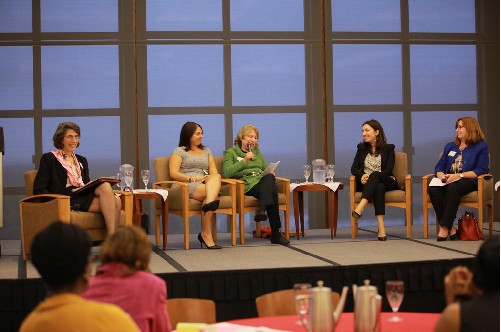 Female entrepreneurs gained an inside track on what investors want during a late-afternoon panel discussion on Oct. 15, part of the day-long Women Entrepreneurship Conference, at Montclair State University.

The attendees also listened to panel discussions and speakers on topics such as “Being a Woman Entrepreneur in a Man’s World” and “How to Be Entrepreneurial while Leading a Large Organization,” and to the keynote address, by Mikki Taylor, editor-at-large at Essence Magazine and author of the book “Commander in Chic,” about personal branding from an entrepreneurial viewpoint.

The question of what investors seek was the focus of the panel discussion “Show Me the Money: Financing to Start/Grow Your Business.”

One of the panel participants, Joan Zief, managing director of Golden Seeds (New York), is an angel investor for businesses with significant female ownership and management. “Golden Seeds is agnostic to region and industry,” she said. “Most angel groups are regional and have industry focus. Our focus is gender.”

“Golden Seeds has been a significant factor in changing the angel investing landscape for women,” said Zief.

Applications for funding are initially made through the Golden Seeds website. Once a company is funded, it can apply for follow-up rounds.

Noting that a third of Golden Seeds’ investments are in the tech industry, Zief spoke about the elements leading to its investment in Little Passports (San Francisco), an entertainment brand for kids started by two moms.

Golden Seeds first rejected Little Passports in 2009, when it applied for funding but had less than $50,000 in  revenues. The company stayed in touch with Golden Seeds, and in 2013 gave it another try, this time receiving funding of $1.7 million.

“They are so successful, they got another $1.5 million, with a pre-money valuation of $12 million,” Zief said.

What made Little Passports successful in getting through the angel round?

“The entrepreneur,” Zief answered. “She is very impressive, in control of all aspects of the company, and [as an investor we] knew she would work 24/7 to make this company successful.”

Other elements that contributed to the decision were:

“This is a company that set milestones and met milestones. It’s a lot easier to get money when you show you’ve reached your goals,” Zief concluded.

Fran Hauser is a partner at Rothenberg Ventures (San Francisco and New York), which invests in growth-technology-enabled businesses — from digital media and commerce to space travel and 3D printing — and funds companies somewhere between angel and A round investing.

Hauser noted that her company looks for traction, market fit and founder-market fit. “We want to understand why this person is the right person to launch this business, and how disruptive is the idea,” she said. “We want it to be disruptive and we want it to have mass potential.”

She also cautioned about pricing your company right. “There are products we love, but it’s simply overvalued and we decide not to invest,” she said, noting that Rothenberg looks at 1,500 companies a year and invests in about 30.

One company that received funding from Rothenberg Ventures is Hullabalu (New York), which creates stories for children and designs them for tablet devices. As a child constantly taps on a tablet while playing games, billions of data points are collected and tweaked in real time.

“If they see a child is constantly tapping on one particular activity, they will give that child more of that activity,” said Hauser.  “It’s a combination of a book, game and movie all in one. It’s very interactive.”

However, Hauser had invested in Hullabalu as an angel prior to joining Rothenberg. “When you make that investment early on, you are betting on the founder and the product,” she said. “It was Suzanne [Suzanne Xie, the founder] and the person who introduced me to Suzanne whom I have a lot of respect for.”

“I loved Suzanne’s tenacity, her conviction,” Hauser added.  “And she was a successful entrepreneur who had built and sold her first company to Google. That meant a lot to me.”

Other advice included tailoring your pitch to men, even if one’s products or services target women.

“Ninety six percent of venture capital partners are male,” Hauser said.  “When you are pitching to a man, you may have to give more context around the problem you are trying to solve.”

Other tips include making sure your business plan is editable, since technology is always changing, and being able to admit that you don’t know everything.

Said Kathleen Coviello, director of the Technology & Life Sciences Division, New Jersey Economic Development Authority, “Technologists don’t know everything, believe it or not. I speak to a lot of folks who can talk about their patents, but cannot talk about how they are going to make money.”

“The best ones say, ‘I can only carry things to here, and I realize I need to supplement my management team.’ Early on, the successful companies identify their gaps and fill their gaps. The ones short to burn quickly are the ones who think they can do it all. Identify it early and talk to investors about it.”