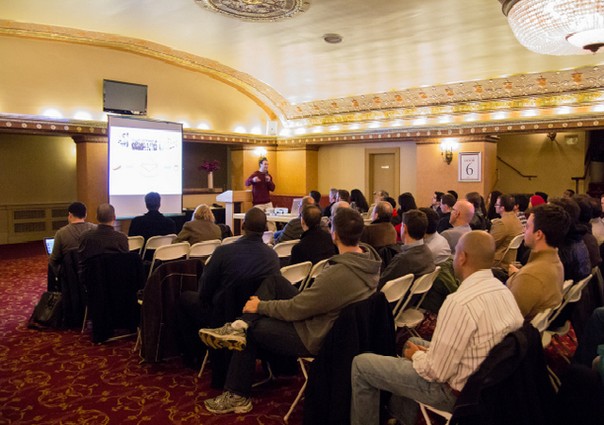 First to the podium to was PolitePersistence (Monmouth County) founder John Genovese. The company says it will soon release a Gmail extension for the Google Chrome browser that simplifies the task of following up with a large number of contacts through email.

Genovese said the extension integrates with the Gmail Web interface, letting users prepare initial and scheduled follow-up emails to be sent to contacts until they reply. Once an email is responded to, future scheduled emails are canceled.

He added that rather than making his typical presentation, he would provide examples of how people who had listened to it discovered unexpected ways to use the product.

He began by sharing the story of a Web developer who realized he could use the extension to manage inbound inquiries from his site’s users. The developer told Genovese what he had been doing before he heard about the product: “I’ll send out an email to follow up with them. The problem is, if they don’t get back to me, it’s like they dropped off in some black hole somewhere. I know I’m missing out on business, but I’m just too busy to follow up.”

In another case, a woman approached Genovese, asking him to make the product available immediately. “I told her, ‘I’m sorry; we haven’t launched yet,’ ” he recalled. The woman then told Genovese that her nephew had cancer, and his family was reaching out to hospitals and doctors, looking for support. Said Genovese, “She said, ‘I’d love to have something like this to help us accelerate getting in touch with these professionals.’ ”

Inbox’s Chris Wang presented the mobile messaging app Inbox Messenger (currently in the beta phase), which he said gives users greater control of their privacy and an attractive interface to use. Wang compared Inbox Messenger with standard Short Message Service (SMS), which he described as “permanent,” “public” and “boring.” The company, a graduate of the TechLaunch (Clifton) accelerator’s second class, has since relocated to New York.

A text message, Wang said, is “on your phone, it’s on the recipient’s phone [and] it’s on the servers and God knows where else.” Inbox Messenger lets users swipe to delete a message from their phone, from their recipient’s phone and from Inbox’s servers, ensuring the message is completely expunged from existence. “It’s gone, completely gone. All this stuff you’ve been hearing about the NSA — we get rid of it,” said Wang.

Should a user surreptitiously take a screen shot of the conversation, the app will alert the writer with a notification along with the captured image.

Inbox Messenger’s developers also addressed privacy concerns regarding a user’s physical surrounding with what Wang called a “privacy screen.” Users can combat “shoulder surfing” by activating the privacy screen. That involves shaking their phone, which leaves black bars where the text once was.

Lastly, Wang said his team had wanted to make an elegant-looking app that makes customers feel “cool” when they use it. “We know people love design. We certainly put a lot of effort into it,” he stated.

Inbox Messenger is available as a beta product in the Apple App Store and the Google Play Store.

The final pitch of the evening was made by Jeremy Snepar, CEO and cofounder of New York Code and Design Academy (NYCDA). Said Snepar, “To stay competitive in the 21st century, we really believe people have to up their … digital skills.”

NYCDA offers a 16-week evening workshop for beginners for three hours twice a week. The curriculum includes lessons during which students spend eight weeks learning HTML, CSS, JavaScript and Ruby on Rails. The second eight weeks focus on more specific areas, such as pure Ruby on Rails, front-end development (JavaScript and jQuery) or user experience and user interface design. Snepar called the program a “project-based learning environment” where students “actually build applications and websites as part of the curriculum … to show the world what they can do.”

At the moment, the classes are designed for working professionals who want to upgrade their digital skills. “We have people who already have jobs — who work in media — looking to develop their skills,” said Snepar. He said the academy has received 300 applications to date and graduated 100 students thus far.

NYCDA wants to eventually expand its classes online so students do not have to travel to the school to learn. Snepar said it also wants to expand geographically and eventually open a location in the New Brunswick area.

Previous: Cloud-Based Wireless Router Company Wins Most Likely to Be Funded at NJEN Event
Next: DAX Technologies of Matawan Bought by UK Firm Spirent for $37 Million