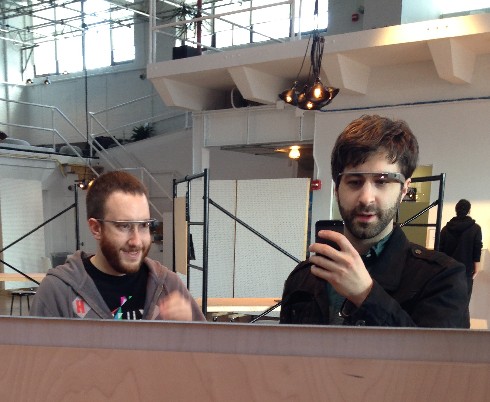 [ Steven Galante is an NJTechWeekly.com contributor. A former Progress reporter who won a first-place award with the New Jersey Press Association for news coverage in 2012, Steven is currently a graduate student at Rutgers (New Brunswick) and an Eagleton Institute of Politics Fellow. He expects to receive a master’s in Communications and Information Studies in May.]

When Google Glass was first announced in April 2012, I posted to Facebook that this was the realization of my childhood fantasy of being the Terminator. I wasn’t so much interested in being the robot hell-bent on hunting down John Connor. No, it was the prospect of accessing the world’s available knowledge on a heads-up display that intrigued me.

The video released by Google alongside the announcement gave a rough demonstration of how the developers see Glass fitting into one’s everyday life. They expected it to be your life assistant fetching Web inquiries using Google’s search engine, capturing and displaying messages from friends, displaying and updating your schedule, providing directions, and capturing images and videos — convenience that is never farther than a glance away.

Glass signaled that wearable devices would be the next frontier in personal computing. But in 2014, Glass has yet to ship to the general public; companies such as Pebble, Samsung, Fitbit and Nike have wearable wristband products on the market; and the Apple rumor mill is in overdrive with predictions of what wearable device it may ship.

That’s why I signed up to receive early access to the Glass Explorer program when it was opened to non-developers. I tend to be in the vanguard of technology adoption among my social circle. A chance to try out Glass would at least show me what to me what the next five years of technology will look like.

I received an invitation to go to Google’s Basecamp in New York City in my email and jumped at the chance to RSVP for a spot. The directions had me go to the Chelsea Market and board a nondescript elevator to the eighth floor where I was greeted by a Glass-wearing receptionist. After I checked  in she pointed me to the main studio area to test the hardware. The layout was minimal consisting of desks and kiosks with Glass on display manned by representatives of the Glass team.

This space was solely for Glass demonstrations and not attached to Google’s New York office, which I later found out was across the street. I approached one of the kiosks where a representative fitted me and explained how to use the device.

Talking to the device was a breeze. It recognized all of my commands (that were predefined on the display). I was able to search the web for information on Google, get coordinates of my current location, get directions back to my school (Rutgers University), and take photos and video with ease.

Sharing photos and video from the device wasn’t possible since it had to be connected to a Google profile. I wasn’t able to link my iPhone with the device. (There is an iOS app that can tie to Glass, but as I understand it’s of limited functionality.) The friend I brought attempted to link his phone to the device but to no avail.

I asked the representative what was the point of holding these demonstrations even though no release date has been announced and purchasing the Explorer edition is limited. She said it was a way to introduce people to Glass and to clear up many of the misconceptions surrounding the device by having them try it. (Interesting, since Google published “”The Top 10 Google Glass Myths” just days after my visit.)

Perhaps the most incredible feature of the device is its ability to translate signs. Another Glass representative walked up to me with a sign in a sans-serif bold font written in Spanish. She told me to say the command “OK Glass, translate.” A box on the tiny heads-up display appeared signaling me to line the sign up with the box.

Suddenly, the Spanish sign turned to English. My mind did not process it immediately. For a moment there I thought I was able to read Spanish. But no, the device had not only translated the sign, but it mimicked the design of the typeface, making the sign appear as if it had been in English the entire time.

The device I was using signaled a low battery after 20 minutes of use. Looking around, I had a hard time finding a device that had enough charge to last for more than 10 minutes. They were either on the brink of losing power or dead. And some of the ones that were working were either not updated to the latest firmware (did not have the translation feature) or didn’t respond to my voice commands. Whether this is a circumstance of the setting or an indication of the limitations of the device I cannot say. But it did limit my overall interaction with the device.

There have been a few instances this year where Glass would have been handy. I recently went on a trip to Annapolis, Maryland, to tour their statehouse — the oldest in the nation — with my class. The ornate architecture and decor justified taking as many pictures as your smartphone could process.

I captured a few shots with my phone but generally did not go out of my way to document the whole tour. Standing still while lining up your phone for the perfect shot in the middle of a government office building did not appeal to me. Glass would have allowed me to take photos and video in a discreet fashion. I can see the general awkwardness of wearing Glass in public giving way to acceptance in more photogenic touristy situations.

After my experience with the device, I was left with a few questions. What everyday problem is this device going to remedy? What new problems will this cause? How will non-techies react when they are addressing someone wearing the device?

Smartphones are nearly ubiquitous and already do most of what Glass promises to accomplish. Rather than reaching for your pocket at every moment a conversation with friends falls silent, you can still maintain an upright composure while (kind of) maintaining eye contact. Translation is the only feature I feel legitimizes Glass as a heads-up display since it pushes the concept of augmented reality.

I have received tokens to purchase a Glass device in the past. Being a poor graduate student, though, I could not justify spending  $1,500 for what amounts to a pre-release developer device that is still limited in features. If you have a smartphone, are not a developer, and do not have thousands of dollars to burn, wait for the consumer release. There is potential, but this is not its realization.

Despite all the negatives I pointed out before, I am optimistic that Glass, or other devices like it, will become more widely accepted as a personal device and in public. Google has since teamed up with the Luxottica Group, parent company of eyewear brands such as Ray-Ban and Oakley, to incorporate Glass technology into Luxottica’s portfolio of fashionable glasses. Perhaps this is what Glass needs in order to overcome the social awkwardness of looking like a “glasshole” while wearing the device in public.

If you see me in public with a new pair of Ray-Bans next year, you may want to think twice about my concern over the bright sun.

Previous: Newark’s Oliver Street School a National Winner in Samsung Competition
Next: So Far, TechLaunch’s New Cohort Companies Are All from Garden State