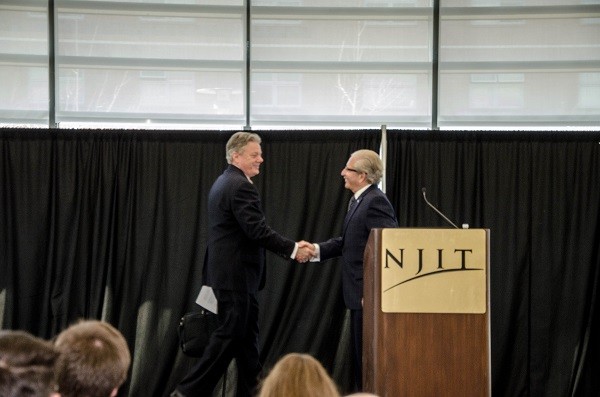 Joseph M. Taylor, chairman and CEO of Panasonic Corporation of North America (Newark), spoke to an audience of more than 200 engineering and marketing students at NJIT’s Albert Dorman Honors College on March 9. He discussed Panasonic‘s history, recent financial losses and the turnaround that Taylor succeeded in implementing. Taylor presented some of his business and leadership principles, particularly the need to be truly open-minded.

He used several pertinent quotes to demonstrate his approach to dealing with adversity in business. His favorite was one from Nelson Mandela: “It always seems impossible, until it’s done.” The corollary to that was an anonymous quote: “Anything is possible, if you don’t care who gets the credit.”  Taylor then followed with an adage of his own: “There is no good news or bad news. Only facts.”

He told the group that they have to deal with what is happening and find a way to make it good.  And he repeated this line: “If you find yourself in a hole, stop digging!” This was the philosophy that he applied when getting Panasonic out of the red and into the black.

Taylor reviewed the company’s history. Panasonic was founded in 1918 by Konosuke Matsushita, who did not have a formal education, but was creative and a risk taker, and had experience as a bike mechanic and industrialist. His motto was, “Our main purpose is to manufacture superior products for daily use that improve the quality of life for everyone.”  It’s now part of Panasonic’s mission statement.

The company’s first product was for home use and designed to improve the quality of life.  Japanese homes are small, and they used to have only one electric socket.  Matsushita made a dual socket for a light bulb that could also accommodate an extension cord, allowing for the use of many home devices.  He also made a battery for bicycle lamps that had 10 times the life-span of the competition’s.

According to Taylor, Panasonic remains the world’s largest battery manufacturer, with the exception of only the simplest batteries; and it holds more intellectual property rights and patents than any other company.

Panasonic has always been at the forefront of social awareness, he continued. It was the first company in Japan to provide a five-day work week; equal pay to women; public service; encouragement of teamwork; and, more recently, family benefits for same-sex marriages.

The company survived the Great Depression and two world wars (including the destruction of all its facilities during World War II).  It made fantastic and innovative products such as VHS, DVDs, Blu-ray disc players and flat-panel plasma TVs.  It also makes 40 percent of the components for Apple phones.

Why does Panasonic make parts for Apple phones rather than making phones of its own?  Because, as Taylor said, “we didn’t listen to customers.” For this reason, Panasonic also missed out on the iPad, the iPod and electronic games.

In 2006, Panasonic started to do badly.  From 2009 to 2010, the company’s consumer product offerings lost $25 billion. Plasma TVs were among them.  They were great technology, he said, but no one wanted to pay for them.

So, Taylor slowly cut out “great idea” products that weren’t selling and identified underperforming business lines. He also analyzed the company’s losses. He said that he’d done his best not to close factories, but ended up having to close 20 of them.  He sold off losers, restructured, downsized aggressively, cut costs and outsourced. Production was moved to lower-cost locations such as Nevada.  Outsourcing did not mean offshoring, however. IBM took over Panasonic’s IT division and an outside accounting firm took over its accounting functions.

The solution to the problem of how to build Panasonic back up came somewhat by chance, when Taylor picked up the phone and found himself talking to a customer calling to place an order. That customer was from AEG, a large entertainment group, which wanted Panasonic to provide security equipment. Taylor sent a very creative engineer over to AEG, but told him beforehand, “Be open minded. Don’t just get a list of products.  Let’s see what we can sell them.’

The engineer returned and said, “AEG doesn’t know tech. We should take care of all of AEG’s technology—not just sell them the security equipment.”  This was the turning point for Panasonic. From then on, they began providing value-added services along with products.

The company also switched from consumer products as its mainstay to B2B products, and transitioned from components to total solutions. Taylor noted that Panasonic started going after customers that had problems the businesses themselves were aware of, as well as customers that had problems they weren’t aware of, but that Panasonic representatives could see in the field.

The turnaround took hold, and Panasonic started providing technology to the entertainment industry.  Taylor gave some examples of customers, including Texas Motor Speedway, the NFL, and Sonoma Raceway, among others.

Panasonic also provides in-flight entertainment systems for airlines, as well as other airplane electronics, such as networking. And it has a real-time weather service that gets its data from antennae on airplanes, outselling the National Weather Service, which gets its information from hot air balloons sent up once a day.

Taylor also spoke about all the “cool and green stuff” Panasonic has been doing, particularly solar power and smart living.  He mentioned that Panasonic had recently relocated to Newark in part to be near NJIT, a good STEM university, in order to recruit talent. In fact, a company rep was on hand to accept résumés.

Taylor then used slides to get across the point that leaders must be ready to take risks, and that they should have foresight, creativity and open-mindedness. “You must be truly open-minded, and not just say the phrase,” he advised.

When asked about the difficulty of dealing with an overseas headquarters, Taylor said that the most difficult challenge was not culture. “We all want the same thing. We have families we want to provide for.”  Distance is not issue. Rather, the issue is language.

Taylor described his frustration at having to communicate via telexes when he was first hired.  He did not like the responses he was getting.  An engineer who spoke Japanese pointed out that, at the other end, they really didn’t understand English, even if they could “speak” it.  Moreover, their delays in responding were due to the time it took to translate the messages. Would Taylor like the engineer to translate for him?  Taylor had never thought of it, but it made sense. He gave it a go, with success.

When asked about tips for success and “How can I become a CEO,”  Taylor responded that he had never planned to become a CEO.  He had gone to school, then tried to start two companies and failed.

The first was a solar panel company that sought to produce an unrealistic product. The second was based on a good idea, but he didn’t know how to make it into a functioning enterprise.

Then Panasonic offered him a job starting up a compressor company under its umbrella. He thought this would be a great opportunity to create a company with someone else’s funding.  He planned to do just that and leave in five years.  He wound up staying 20 years.

Taylor also mentioned that, when staying within a company and moving between divisions, you gain knowledge and experience that’s transferrable. You’re bringing added value, something that doesn’t happen when you go to another company.