Home » News » In Newark, 2 Gateway Reemerges as a Destination for Companies “Who Need to Move Data” 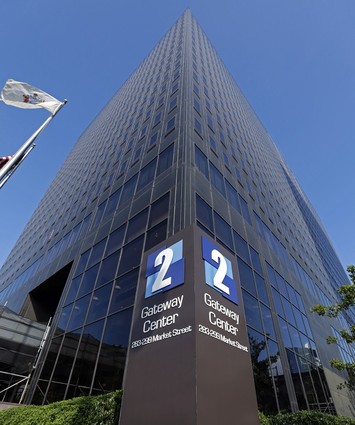 When tech companies, or any firms that use a lot of data, consider coming to Newark, they need to be convinced that the city has the infrastructure that can support their data communications needs.

They often haven’t heard of the “lightning fast” dark fiber lying under the main thoroughfares in Newark, or of the city’s extraordinary efforts to make high-speed Wi-Fi available to the public.

Sitting on one of the spurs off the high-speed fiber line, which makes Newark’s downtown so attractive to tech and tech-reliant companies, is 2 Gateway Center, a building that has been renovated for the 21st century and is now looking for tech tenants. The owners of 2 Gateway are aware that many of Newark’s positive attributes are well-kept secrets, but they don’t want 2 Gateway to remain a secret as well.

In an interview with NJTechWeekly.com, Dudley D. Ryan, senior vice-president at leasing agent CBRE (New Brunswick), and Kevin Collins, managing director of asset management and finance for the building’s owner, C&K Properties (New York, N.Y.), discussed the building and why it will work for companies that need to access very fast communications or move very large files.

“This has always been a building that was technologically advanced,” Collins said. “What we’ve done during the last five to seven years is build on our technology legacy to enhance our technological infrastructure.”

“We cooperated with the City of Newark and built some infrastructure within our building, and then allowed the city to put the Wi-Fi equipment on our roof, so we are one of the nodes that triangulate through the downtown and create the Wi-Fi network.”

Talking about the building’s history, Ryan noted that 2 Gateway had originally been built and designed for AT&T as their Northeast regional headquarters for the equipment side of their business. The building was full of engineers who designed modern phone switching systems, and it was built “by engineers for engineers.”

He explained that the Amtrak rail line that runs up and down the East Coast serves as the fiber spine for the region. Along the section of the fiber spine that traverses Newark, there is a spur that runs along Market Street, then to an interconnect building known as 165 Halsey Street. This is the largest “tele-co hotel” on the East Coast. And that spur of fiber runs under the sidewalk in front of 2 Gateway, Ryan said.

“We’ve utilized that, brought it into our building so it has multiple points of access for redundant fiber. Combined with the node on the top of our building which connects us via microwave dish to 95 Williams Street (jointly owned by Verizon and AT&T), which is one of the largest switching stations,” this creates a “redundant connectivity that is ideal for technology companies.”

“Any company that needs to move a lot of information is going to love this and appreciate the caliber of the infrastructure.” And the more reliant companies are when it comes to moving information, the more they need secure and efficient systems to do that, he added.

The types of businesses traditionally located in the building that tend to move huge files include engineering companies, construction companies and architectural firms, Collins said. They need connectivity and bandwidth, and in that they’re not alone. “By enhancing the technology capabilities, we made ourselves more attractive to bio and life sciences, financial services and technology companies,” he said. All these industry sectors are really big users of bandwidth.

Collins noted that the owners considered what amenities were going to be important to potential tenants. “We always had good connectivity here, we always had multiple carriers and types of connectivity.” But they wanted to make this connectivity as robust as possible.

“We have what’s called a quintuple redundancy here,” Collins continued. “Tenants in the building can receive Internet service via traditional telecom companies like Verizon and AT&T. They can get it wirelessly by connecting to the satellite dishes on the roof. They can get extremely high-speed fiber by connecting into the fiber spine that we constructed in the building to help the city create its Wi-Fi network. They can also get it from traditional third-party [Internet service providers].

“Tenants who don’t want to deal with third parties can buy service directly from us. We have access to the highest bandwidth available in the city, 10 gigabits per second Internet service, and we can get it at the lowest cost because of the deal that we struck with the city.” He said that the city has a bulk buying arrangement with the carriers at 165 Halsey Street.

Collins added that 2 Gateway is supporting the City of Newark’s initiative to develop Newark into a tech startup hub for young companies. “We are trying to do this from the private sector, landlord perspective. We actually have a building for people to come to that we believe competes favorably with any building on the East Coast,” including those in Brooklyn, Manhattan, and along Route 128 in Boston.

Talking about what else makes the building attractive, in addition to its technology backbone, Ryan explained that, when this building was part of AT&T, the engineers were packed into spaces amounting to about 120 square feet per person. This density required that there be extra elevators, extra bathrooms, increased power and air conditioning capabilities.

“Through the years, the business cycle has evolved, and companies are actually starting to go back to this density,” he said.

One of the interesting facts about the building is that it has 18 floors and 19 elevators, Ryan noted. Each floor plate is just over an acre, with a slightly offset core. “What this does is provide an efficient workplace in two ways. Everyone wants to have horizontal communications within their workforce. Because our vertical transportation is so rich, elevator recall is for the most part instantaneous,” he said, so people can get from floor to floor very quickly.

Previous: Catching up with Anthony Bongiovanni, Founder and CEO of Micro Strategies
Next: Opinion: Strong Spring and Summer in New Jersey Tech Sets the Stage for Fall