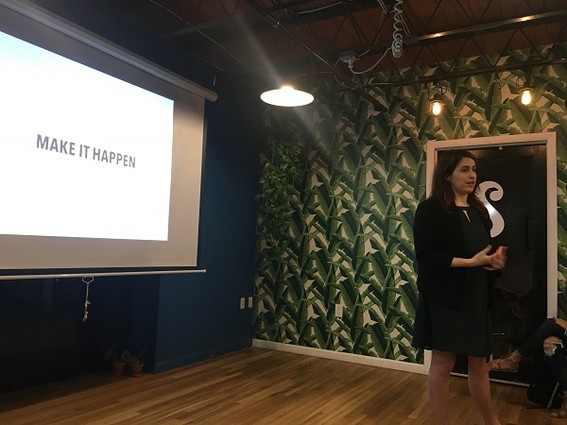 Jenna Gaudio spoke to the Jersey Shore Women in Tech meetup (Asbury Park) in February about how to navigate a career in tech, using examples from her own climb up the ladder.

Gaudio is now vice president of product management at Vydia, a fast-growing tech startup based at Bell Works, in Holmdel. “We were one of the first ones at Bell Works. We were a very small startup. When I walked in the door there were about 15 people.”

“Whether you are at the top or just starting out, we all face issues along the way, and need help navigating them,” she told the group.

People are told to “make it happen,” but they need to know how to get started, what to do if they fail and whom can they go to if they need help. That’s why groups like the Jersey Shore Women in Tech meetup group are important, she said. Then, she began her story.

“I graduated during the worst recession of our time, and I could not get a job,” she told the group. “So I became a waitress. I was the worst waitress you’ve ever seen.

“Luckily for me, TGI Fridays is an organization that cares about structure, teamwork. It cares about presentation and recipes, and those are things you could study. … So, I committed myself to being the best employee and team member possible,” she said.

You Control Your Life

“I learned a very important lesson there: You control your own life. I found a way to work my way up, learn the tricks of the trade and how to rely on my team.” However, it was time for Gaudio to transition out of waitressing.

In 2010, she recalled, Fort Monmouth was shutting down, and everyone had to figure out a new job. Her dad worked there as did many neighbors and friends. So she looked into if the fort was hiring people to help with the transition and it was. “This was a highly logistical thing. It was one of the largest base realignment projects in history.”

When she applied for a job at Fort Monmouth, she was told that her position would be temporary, meaning that the faster and better she did her job, the sooner she would be out of a job.

This was Gaudio’s first real team.  She had a female colonel for a boss, and there were several other women on the team, as well. The colonel was the chief project manager, and Gaudio was her assistant. “I didn’t get to do what she did, but I had the opportunity to see how she did it,” and so she learned from the colonel.

Gaudio did her job well, and when almost everyone else moved to Maryland, she was one of the few left at Fort Monmouth to run the logistics for the team. “We still had to come in under budget and on time,” and “I had to step up.” That job got her noticed by organizations and leaders in government, she said.

After the base closed, Gaudio got a job offer from Project Manager Electronic Warfare, located at Aberdeen Proving Ground, an Army installation in Harford County, Maryland. They pursued her because it needed someone with her skills. She moved down to Maryland and joined the team. Her responsibilities involved “pretty much everything that was keeping us out of World War III. Needless to say, I didn’t have a lot a sleep when I had that job.”

Despite the perks of being a government contractor, she identified a crucial problem: “I realized that the government is a really big organization and it moves very slowly. … That kind of culture was engrained, and sometimes it was demoralizing.”

She added, “Company culture is a super-important thing to look into. It’s not so much about finding a job where you can be part of the team and add value, it’s about understanding the company culture.”

The problem with her next job was also the company culture, but for a different reason. “I was the only woman on the team, and they made me very aware of that.” The management would not invite Gaudio to important meetings. After lobbying by members of her team, the executives eventually started inviting her to the meetings, “but only as the note taker.”

She said that when it came to interfacing with clients, she was essentially being presented as an admin, even though she was doing all of the technical work. Once again, company culture was important, and she began to explore other options. Back then, when she didn’t have a great network to fall back on, she used LinkedIn.

“I did my research. I found the right company, and the right person,” to work for and she was sure that it was going to work out. “The only problem was that there was no way they would take my resume seriously.” The company was Yashi, a Toms River-based advertising tech startup.

There was one woman on the team who had gone to Monmouth University, Gaudio’s alma mater, and so she connected with the woman via LinkedIn. That allowed her to contact others in the company and, finally, she got a job interview. After “the hardest interview of my life,” Gaudio was hired, but only as an assistant office manager.

Only You Get to Decide Your Value

“A lot of people think that taking a pay cut” or taking a job that doesn’t have a great title is not good for your career, but Gaudio disagrees. She knew that she could solve a lot of problems for the company, so she said to the head of the company, “Give me three months to see what I can do,” and then reassess this whole assistant-office-manager situation.

“That was important because no one else gets to decide your value,” said Gaudio. She started holding meetings, figuring out where the pain points were in the organization, and began to solve problems that the company execs didn’t even know existed until they started having the conversations.

“I started an internship program. … Ad tech is very hard to understand. I knew I had studied it well enough that I could communicate it, and I could start scaling the company by educating the interns, putting them into the company culture and then converting them into full-time employees.”

Gaudio helped refocus the messaging and the mission of the company. During the conversations, the company realized that it needed a marketing team. She and her assistant spent all night figuring out a marketing strategy. “We pitched it to the execs the next day, and they gave us the job.” Gaudio took that little opportunity and ran with it.

She and her team went to a trade show and raised awareness of the company. That worked out so well, they hosted their own summit, with Seth Godin as keynote speaker and panelists from all over the ad tech industry. It was an effort, she noted, that required extraordinary commitment from the team.

An important lesson she learned was, “If you bring value to the team, they are going to show up for you!”

That brought Gaudio to her current company, Vydia. At the time she interviewed there, it was made up of 15 young men. “But that quickly changed.” She was hired along with a female intern to help with video, and another woman was hired to take charge of finance. “We went from five percent women, to 10 percent women, and now we are almost 40 percent women.”

The team jelled, working together both inside the company and outside, and that led to big wins.  When Vydia won an award, the four men who founded the company were honored, but CEO Roy LaManna, wanted Gaudio in the photos in recognition of her contributions. “There’s a big difference between not being invited to meetings and coming to stand with the team,” she said. “Then you know you are in the right place.”

Concluding her talk, Gaudio told the women in the audience that, once you get to the top or to a place of influence, you should “throw down” the ladder and help others climb it. She emphasized the importance of mentors and how they can help women change their perspective and recognize opportunities.