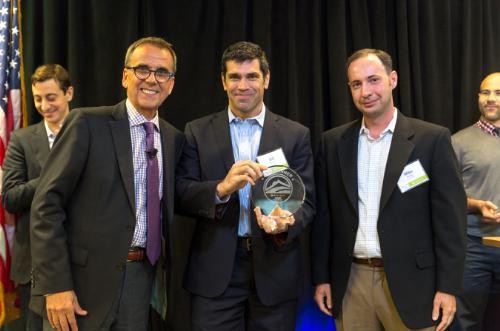 Realogy, one of the biggest names in real estate franchising, also oversees real estate brokerage, relocation and settlement services. The summit invited technology innovators to present their products to an audience of real estate executives and franchise owners at Realogy headquarters.

Realogy decided to relocate to Madison from Parsippany in 2011. According to NJ.com, the decision to stay in New Jersey was based in part on grants and tax breaks provided by the state. Those incentives were offered to ensure that Realogy would continue to employ more than 900 New Jersey residents.

The three finalists were chosen by a panel of six executives — five from Realogy headquarters and one from Prominent Properties (Hillsdale), a Realogy franchise. The executives questioned each presenter following his or her five-minute presentation. The audience then chose the winner by voting via text message.

Matterport’s speakers received a small glass trophy in addition to the giant $25,000 check. But even the contestants who didn’t win benefited from attending.

“Being selected to be one of the 15, for us, is validation of acceptance within the real estate community,” said contestant Robyn Woodman, VP of partnerships for Househappy (Portland, Ore.), a real estate listing service.

The contestants were chosen from more than 100 applicants. The Realogy summit gave them the unique opportunity to demonstrate their products to some of the most powerful people in real estate.

“There’s no dispute that Realogy is a powerhouse,” Woodman said. “They represent 26 percent of domestic market share.”

Alexander Perriello, president and CEO of Realogy Franchise Group, told NJTechWeekly.com the original contest was conceived to give the company early access to innovators.

“If you start with someone early, you can fine-tune what they’re doing,” Perriello said. He attributed the original idea for the contest to his fear that the company would miss out on potential partnerships.

Mark Panus, Realogy senior VP of corporate communications, said the FWD event is still unique in the real estate industry. He added that what sets the company apart is its decision to work smarter and harder.

Smith said the industry has in fact adapted to technology, although it may appear otherwise because the home-buying process requires human expertise.

Indeed, several contestants emphasized that their products and services are not meant to replace or challenge real estate agents’ role in the buying process; on the contrary, many were designed to make agents’ lives easier, they contended.

For example, Seth Siegler, founder and CEO of Curb Call Technologies (San Diego), said his app “doesn’t change the process of being a realtor” and was designed for the most part to generate leads.

Siegler, who lives in San Diego, was one of several contestants to fly in from California. Others, like Börge Grothmann — who traveled from Berlin to present on behalf of SmartExposé, a real estate marketing software service — came from even farther away.

Despite their varied backgrounds, most contestants had one thing in common: they had not previously worked in the real estate industry. Instead, many had gotten the ideas for their services when they were in the process of buying homes themselves.

One such example is Closing Time (San Francisco), a service that bills itself as a “personalized home buying checklist.” Based on their own experience, Closing Time’s creators decided to remedy the lack of tools available at the contract phase of real estate transactions.

Moreover, Closing Time represents a general increase in the number of products designed to meet customer needs at later stages of home sales.

And that’s not the only change that has occurred since last year’s contest. Perriello pointed out that this year nearly all the contestants presented their products on a mobile device, which was uncommon at last year’s event.

He said he sees it as a sign that real estate businesses are adapting to home buyers’ changing technological preferences.

“There’s not only innovation going on, there’s a revolution,” said Perriello.